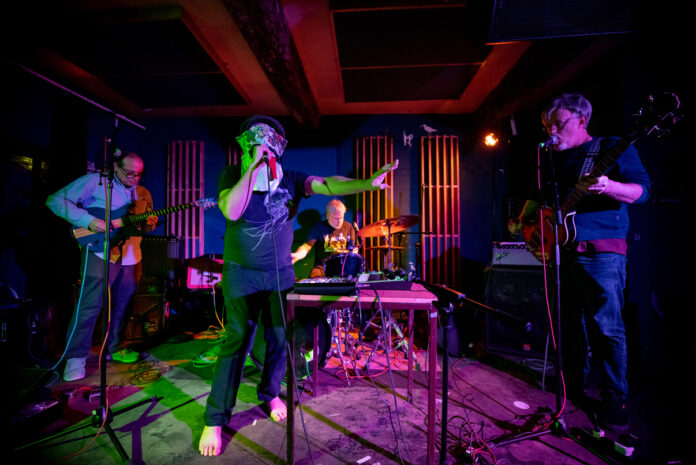 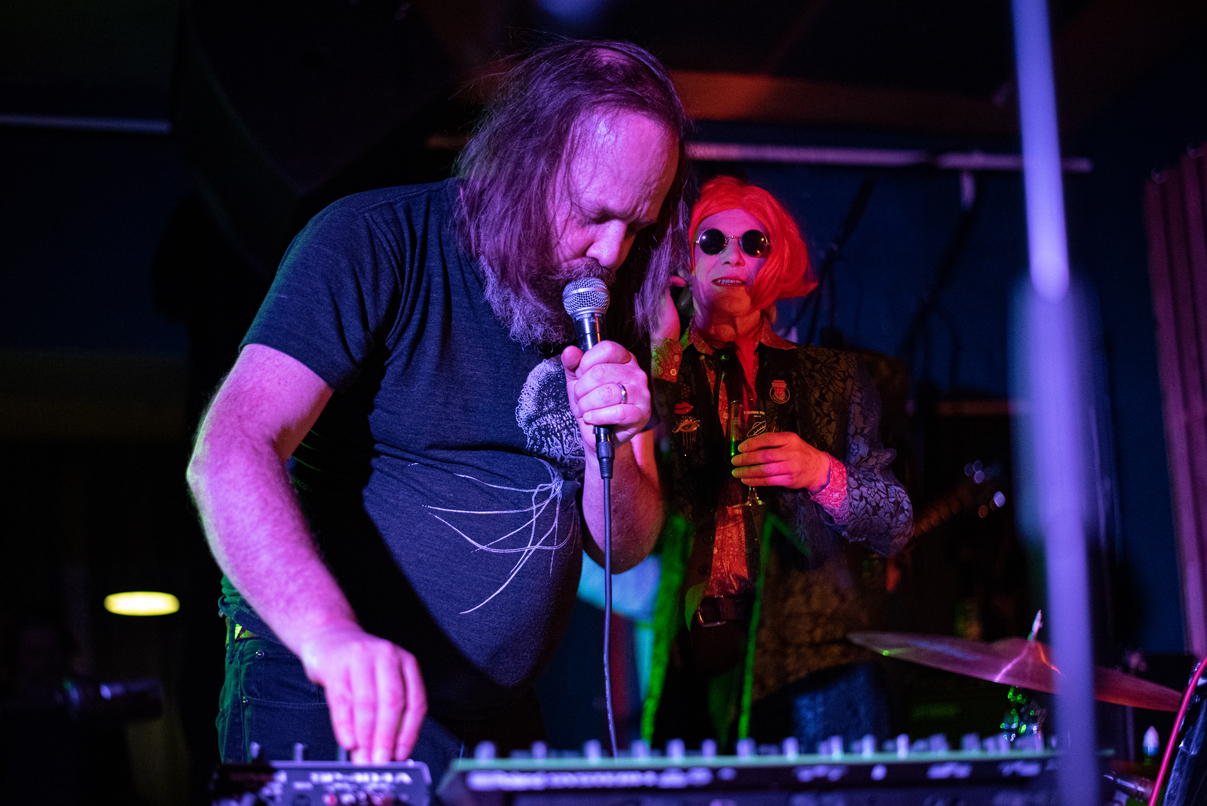 Andy Brown heads down to Wharf Chambers to catch experimental eccentrics, Sunburned Hand Of The Man. He shares his thoughts for Louder Than War.

Trying to describe the music made by Sunburned Hand Of The Man may prove to be a thankless task but I’m going to give it a good shot anyway. Imagine free-jazz played by a basement-dwelling noise-rock band with a penchant for the desert blues of Don Van Vliet and a heroically callous disregard for song structure. With a revolving cast of collaborators the Boston, Massachusetts-based collective have created uncompromising and deeply strange music since the mid-nineties. The droning, psychedelic offspring of Sun City Girls and early Butthole Surfers. It’s one of those gigs where I’m not entirely sure what to expect. One thing’s for certain, this won’t be your average kind of Sunday night.

With a practice amp carefully perched on upturned crates and a table full of effects pedals, Leeds-based experimentalists, Vibracathedral Orchestra, are ready to roll. Guitarist Julian Bradley kneels on stage with his back to the crowd as multi-instrumentalist Adam Davenport leans intently over a synth. John Godbert gets comfy behind his drum kit while Neil Campbell surrounds himself with any and every instrument that he can get his hands on. The raw materials and a belly full of inspiration are all they need. Guitarist Michael Flower is missing tonight. yet we’re still set to receive a hefty dose of psychedelic instrumental improvisation. And then it begins. 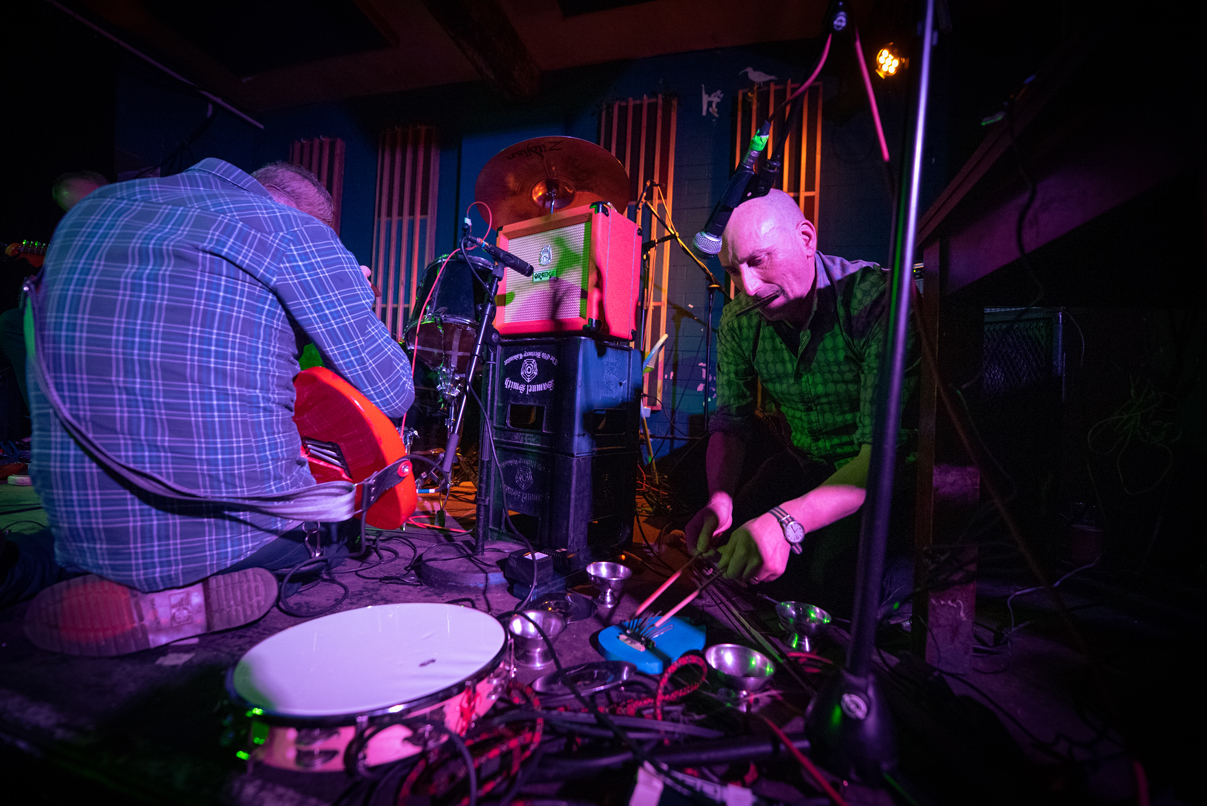 The sound slowly builds as the band lock into an oscillating and endlessly ascending drone. Campbell crouches under the table of pedals and hits his violin with a severely frayed bow. Godbert feels his way through the music and creates a rhythm from cymbals and, at one point, a metal chair. The relentless repetition is almost frantic, yet strangely calming at the same time. Kalimba, bird sounds, penny whistle and sporadic percussion are stirred into the heady whirlpool of sound. The band’s music feels like a living, breathing organism. I emerge from the 40-minute sonic ritual feeling revitalised. It’s been far too long since I’ve had the pleasure of experiencing Vibracathedral in full-flight.

Nape Neck are the new kids on the block of tonight’s line-up. The three-piece play scratchy, urgent post-punk; the kind of music Leeds has always been particularly good at producing. Bobby Glew invokes early Sonic Youth as he pulls a steady stream of beautifully discordant noise from his guitar. Squint hard enough and he might even resemble a young Thurston Moore. With a slide over his finger and a tablespoon to batter his strings into submission, the guitarist never settles into anything predictable. 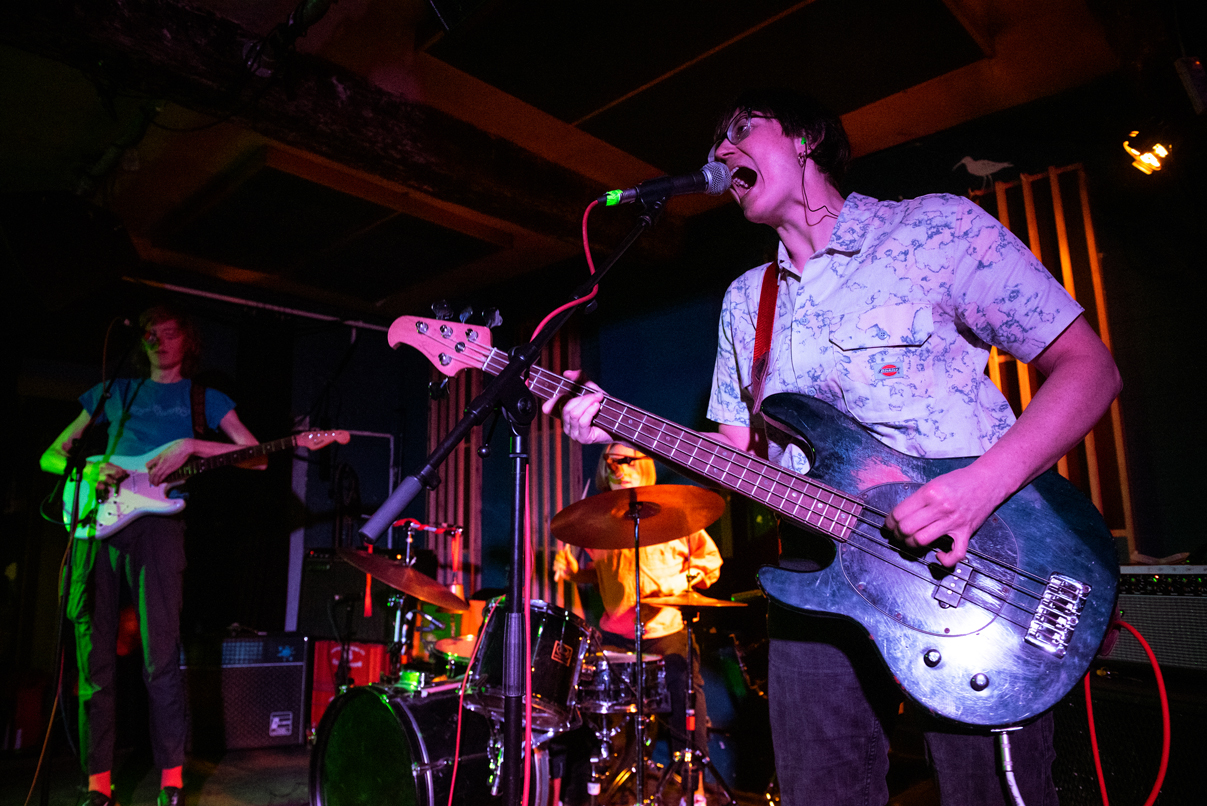 Bassist Claire Adams and drummer Kathy Grey make one hell of a rhythm section; giving Nape Neck their defiantly wonky post-punk swagger. The band are a tightly knit unit, yet it’s the kind of untamed sound that feels like it could implode at any moment. Oh and they all sing, shout and generally kick arse throughout the set. It is, dear reader, exactly how post-punk should be. Just in case you had any concerns, the underground scene is alive and in rude health. “Is that too much guitar? Too Loud?” Glew asks at one point. Turn it up comes the reply from the crowd. More of this, please!

“He’s going to get cold feet,” my friend says as he watches vocalist and synth manipulator Shannon Ketch approach the stage without his shoes. It soon becomes apparent that Sunburned Hand Of The Man are a band that do things their own way. Cold feet and splinters be damned. A minute later and Ketch, John Moloney (drums), Mark Perretta (guitar) and Robert Thomas (bass) all start moaning, groaning and wailing into their respective microphones. A couple of minutes after that and Ketch has put on a crudely stitched fabric mask that covers his entire face. With their throats cleared and minds wide open, the band are ready for action.

We’re lowered into the band’s skewered world with an incredibly loose, desert-rock jam that evolves into a hypnotic, psychedelic groove. The track gradually descends back into chaos; the music constantly transforming and unravelling right before our eyes (and ears). “And the clouds fall” sings Ketch as he sways to the band’s temperamental swing. It’s the kind of sound that makes other rock bands seem like they’re hemmed in by the tyranny of form and structure. Sunburned Hand Of The Man are unreservedly free and look like they’re having the time of their lives. 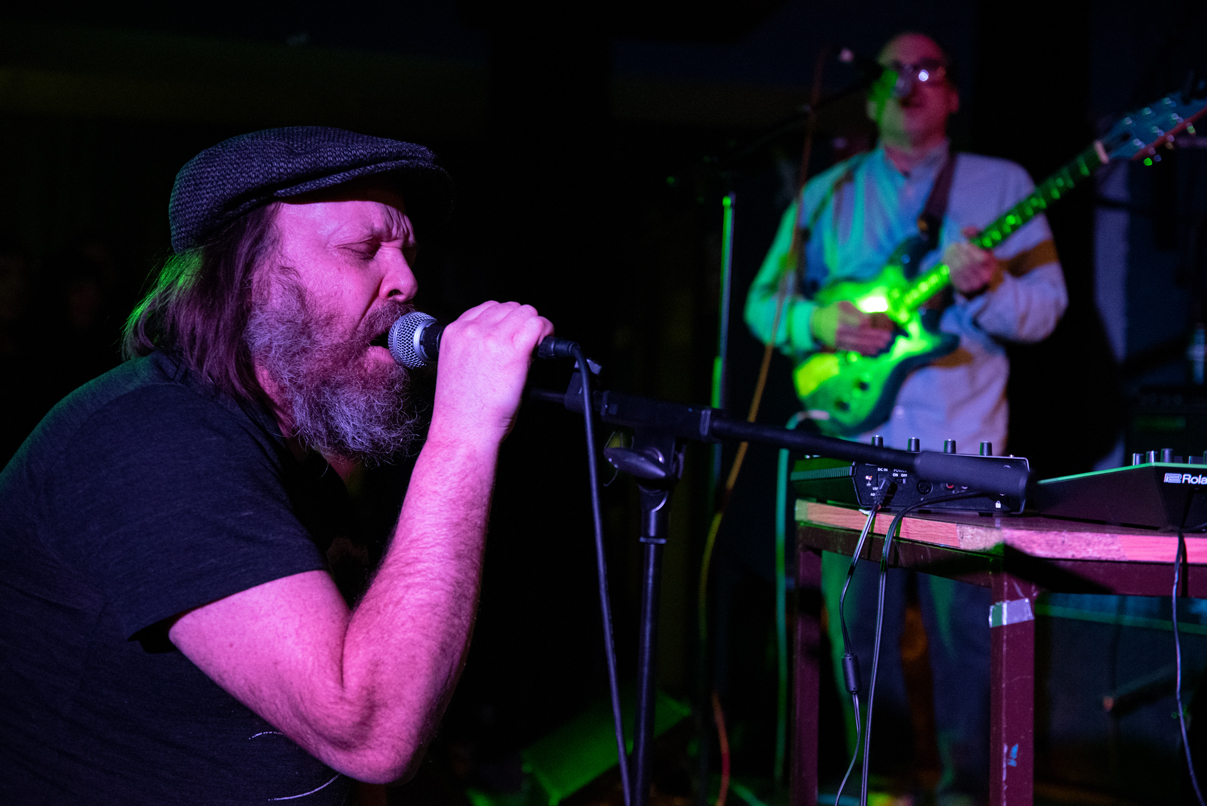 It’s at this point that the legendary Herb Diamanté appears to join the band on stage. A mysterious, immaculately dressed lounge singer with a penchant for red wine and surrealism. It’s particularly apt as I was trying to describe his act to a friend earlier in the evening. Aubergines and Scott Walker were mentioned. They treat us to a lengthy interpretation of Wasp In A Jamjar that finds our new singer crooning about a half-eaten, hard-boiled egg and a trapped wasp over a truly mesmeric, free-flowing groove. I’m sure it wouldn’t be everyone’s cup of tea, but I’m beaming from ear to ear.

When Moloney dons a rubber alien mask, it seems to act as a cue for the band to let it all hang out. As if they weren’t already. The sound becomes wilder as the night goes on, the five musicians on stage are well and truly in their element. Bursts of brilliantly frazzled harmonica are added to the subversive stew and the band are in full swing. Diamanté tells us with a grin, “you’re all doomed! This is a locked room with padded walls and no key”. A gothic lounge singer by day and an axe-wielding maniac by night? Perhaps I’ve got a serious case of Stockholm Syndrome, but I’m really enjoying myself. 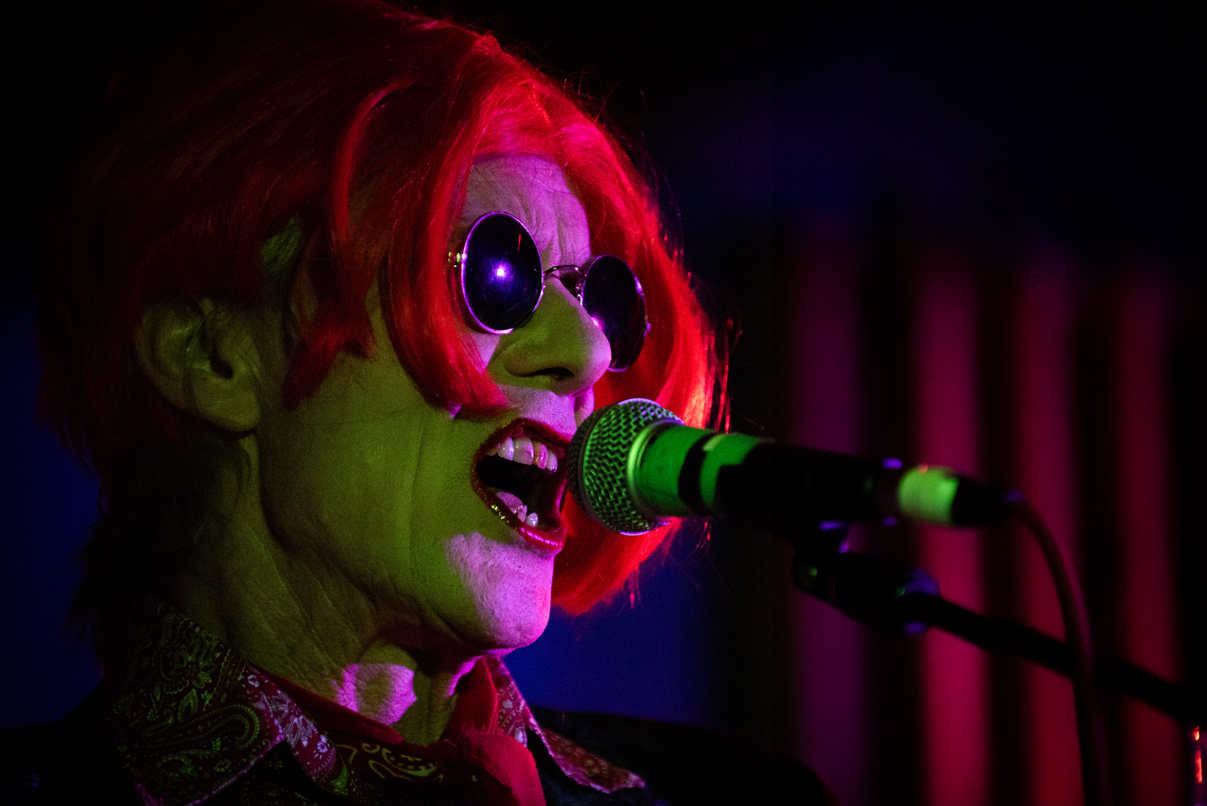 In the midst of the madness, someone hands Diamanté a hard-boiled egg. Thankfully, it isn’t half-eaten. If birds were to hatch from such an egg, I’m sure they’d be very strange indeed. Diamanté says he might step out for a quick cigarette, unfortunately for him, the band and the crowd have different ideas. In a beautifully ironic twist, Diamanté has now become something of a prisoner. Trapped, you might say, like a wasp in a jam jar. The crowd begs for more. One more trip into the psychedelic wastelands of Sunburned Hand Of The Man. The best Sunday night I’ve had in ages!

Check out Herb Diamanté on Bandcamp with A Delicate Stiletto, A Piece Of Master, May I Light Your Cigarette? and the Steam-Powered Pope EP.

All photos by Jim Mumby.