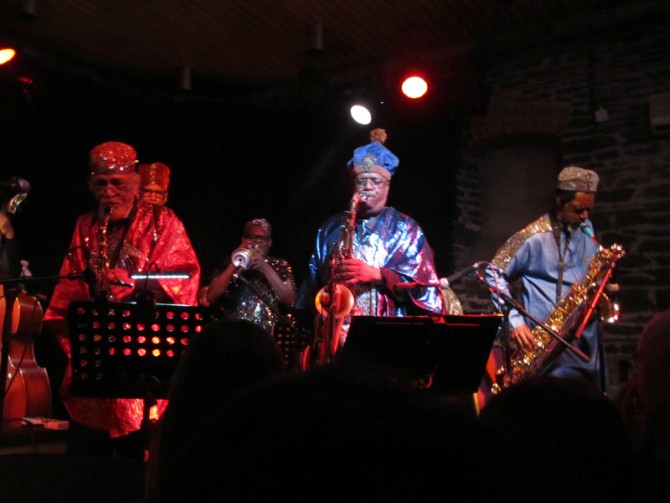 Jazz’s cosmic pioneers Sun Ra Arkestra landed in Bristol from Saturn this week. Elfyn Griffith was there to meet them…

It’s balmy outside, the heat from the Easter weekend coalescing into a humidity that hints at approaching thunder storms. Inside Fiddlers, the backstreet gem of south Bristol, the anticipation is not of rain but of the interstellar vibe of the Sun Ra Arkestra. A year and a half ago the Arkestra gave a superb kaleidoscopic jazz journey at the same venue, and tonight as they take to the stage decked out in their glittering brightly coloured space-age-meets-Egyptian-deity gowns, we aren’t going to be disappointed.

Led by 95-year-old Marshall Allen, the heir to the controls of this spaceship after Sun Ra himself shed his mortal coil back in the early 90s, the Arkestra cling to the late great composer’s belief that he was from Saturn and was bringing the message of peace back to planet earth through the medium of music. Well, the Arkestra are still conveying that message in some style, although I think the long and rich legacy of jazz and a free-form and innovative attitude towards it has more to do with their long-lasting panache than any space cadet-ism. The sprightly veteran Allen leads this mass of colour and impressive musical virtuosity. There are 11 on stage tonight, a coalition of horns, brass, keyboards, double bass, drums, and the sultry, soulful and robust vocals of Tara Middleton.

“Interplanetary melodies, interplanetary harmonies,” they chorus during the piano-led warm-up of Interplanetary Music, and then we’re into it, a wall of horns and jazz vocals as Sometimes I’m Happy is followed by the slow rhumba feel of Stranger In Paradise, phasing out with Allen’s Clangers-style knob-twiddling.

The titles of the next two numbers, the insistent trumpet-led melodious cacophony of Journey To Saturn, and the slow-burning classically smokey jazz of Tapestry From An Asteroid, show where the spacey legacy of this lot comes from. “Everything is inspirational, cosmic vibrations…” as alto sax player Knoel Scott puts it to me in the break between sets.

But these cosmic vibrations come from a thoroughly well-versed and historic immersion in jazz started by Sun Ra back in the 50s, and his pioneering avant garde and eclectic music taking in the entire lexicon of jazz’s rich history. Here tonight we get swing, New Orleans blues, orchestral jazz styles all delivered with a deliciously confident and deceptively effortless air by seasoned professionals, and always with that sharp sense of innovation – a mad squeal from Allen’s sax, a tinkling of his discordant moog, a rippling of at-odds melodica  – ready to spring out and delight. Discipline 27b is a case in point, a cinematic tour-de-force: repetitive horns, Miles-ish overtones of prompting, spearing, trumpet, whistles and flutes ending with a Marshall-ed bit of eccentric improv. Indeed, Allen is always prompting and guiding, helped by Scott flipping through his voluminous sheets of music when he’s not beating the congas and letting rip with a sax solo.

The second set gives us yet more hypnotic grooves and blissful harmonies: the soulful and jazzy brilliance of Space Is the Place; acid-lounge jazz torn down the middle by Marshall’s sax and patched together again by the individualism and collective skills of all the musicians…great music underpinned by steady and magically subtle rhythms. Both sets end with We Travel The Spaceways, the horn section physically weaving their way through the audience while still playing. “Ain’t got time to shake your hand, gotta get to outer space as fast as I can,” raps the nonagenarian Allen as the mothership heads back to Saturn…

We leave Fiddlers back into the evening heat feeling even more uplifted than their last time here. Beam me up…

Words and photo by Elfyn Griffith.  More writing by Elfyn can be found at Bristol In Stereo