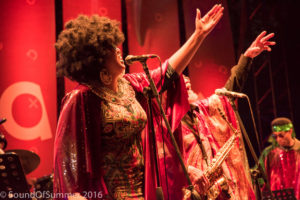 Alan Ewart recently enjoyed an introduction to Cappadox Festival, Turkey’s newest and most exciting festival of Contemporary Art.  Whilst there he caught a set by legendary Avant-garde jazz band the Sun Ra Arkestra.

It must be said that I am no jazz aficionado but I have had a life-long love of Miles Davis, John Coltrane, Louis Armstrong and others.  Sun Ra may never have achieved the level of fame enjoyed by some of the greats of the genre but nonetheless he became a legend on his own terms.  Sun Ra was a revisionist both politically and as a musician.

A prolific writer, recording artist and live performer Sun Ra was as notable for his political views as he was for his experimental approach to jazz.  Sun Ra even claimed to have been abducted by aliens and transported to Saturn, something that inspired the cosmology often referred to in his work.  Sun Ra may have died back in 1993 but his legacy lives on in the form of the Sun Ra Arkestra. 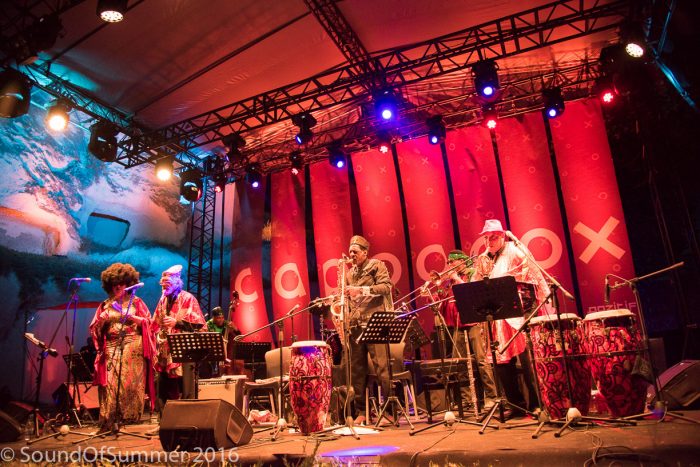 Cappadox festival have established stages in a number of stunning locations around the village of Nevşehir in the Cappadocia region of Turkey.  The Tower of Uchisar is a huge pinnacle of sedimentary rock into which homes, churches and fortifications have been carved for thousands of years.  At the foot of this natural wonder Cappadox established one of their main stages.

It is almost impossible to describe the feeling that you get attending a gig at a location like this.  The sense of history, the meeting of ancient and modern, the mixing of cultures combine to create an awe-inspiring sense of wonder that, when combined with the Sun Ra Arkestra’s music, creates an almost other worldly experience.  To hear experimental jazz echo around a natural wonder was an experience that I will never forget.  This is a joyous outpouring of musical talent, it is spiritual, uplifting and life-affirming.

Some members of the Sun Ra Arkestra may be in their later years but the spirit of Sun Ra lives on in the band and in the crowd who danced, swayed and absorbed a unique experience.  The Sun Ra Arkestra showed that they are willing to continue to push the barriers back as the horn section left the stage to continue playing as they wandered through the crowd, an impromptu line of followers forming in their wake. 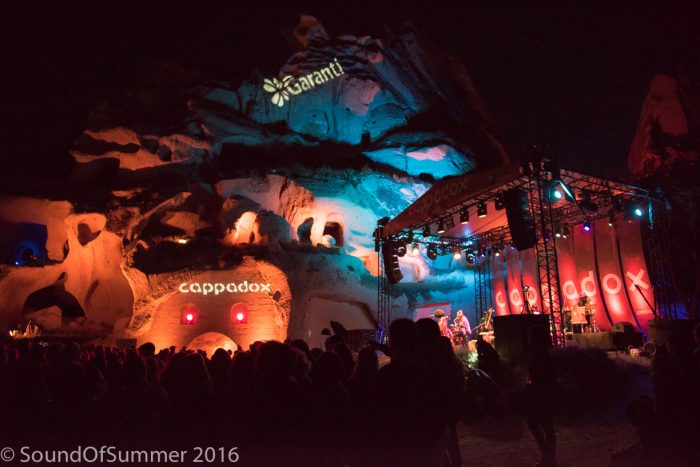 As the performance continued you could sense that you were experiencing something almost magisterial in its beauty.  You knew that your mind was capturing a once in a lifetime scene, something unlikely to ever be repeated.  You knew that you were “living totally in the moment” nothing could be allowed to obtrude on the magic around you.  I can’t pretend that I totally understood where the band were coming from.  I most certainly did not.  Some of the music was so far out of my comfort zone that I was left bewildered.

I was reminded of the first time I heard Van Morrison’s band play Miles Davis’s “Freddie Freeloader” as a prelude to Van coming on stage.  I was awestruck, I recognised the form if not the interpretation and it was several days before I realised that Morrison’s band had the audacity to reinterpret a piece by the most experimental and innovative musician the world has known.

The true joy of music is its capacity to evolve, to excite, move and even shock us.  Every music fan has a treasured stock of memories, the ones we talk about in the pub many years afterwards.  The truly blessed music fan may even have been lucky enough to experience a piece of music or a concert that touches the very essence of who we are, it reaches our very core and allows us to see the world through new eyes.  Language, dialect, genre and form become irrelevant as we are absorbed by its universal language.  Rarely a musical experience takes us to a place way beyond our previous understanding of the art.

Seeing the Sun Ra Arkestra, in such a place, gave me one of those never to be repeated experiences.  It was something I will never forget.

You can find out more about Cappadox festival on the internet on Facebook  or by following @CappadoxFest on Twitter.