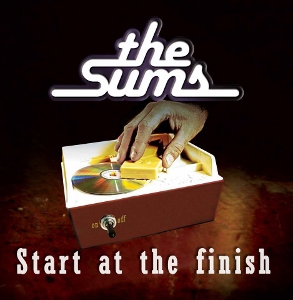 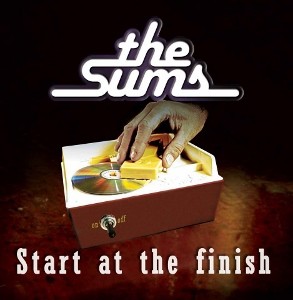 The Sums: Start at the finish – album review

Ever a supporter of her local scene, Louder Than War’s Roxy Gillespie checks out the new album from The Sums.

I’m always interested to hear a local band I haven’t caught before. So, when I was asked to review The Sums, I grabbed the opportunity in both sweaty fists. I never caught them in their Smaller days, either, so I was intrigued to hear what they were doing now.

I’m not sure I would have put ‘Start at the Finish’ as my opening track. I’d have warmed the audience up a bit with a few shorter, snappier tracks first. Having said that, placement aside, it’s an interesting proposition. The rhythm is slow and hypnotic, augmented by spare guitar licks, and brief interludes where the rest of the band spring into life, but really, for the most part, this is all about Digsy’s vocals.

‘Cliché’ is shorter with a sultry blues/rock tinge, but still seems to veer towards the experimental. The sound on ‘Cliché ’is more rounded, as the band push forward, both musically and vocally.

I didn’t feel the third song was particularly strong, and I found the game show shouting of ‘Come on Down’ a bit irritating. I also thought the vocal worked better when the backing singers kicked in on this track, taking away some of the harshness.

The next song is a belter. Alternative rock at its finest. The sound is fuller, making use of the considerable talents of the band as a whole. I really liked this. The Sums obviously have a lot of potential, and it shows on ‘I Won’t’. A confident and edgy track.

‘Nobody’ is an indie anthem, starting with the tinkling sounds of a child’s music box skilfully blending into the music. The shimmering guitar gels perfectly with the vocals, making it another favourite. Whilst the previous songs are more experimental, this is pure pop pleasure.

‘Get Out Clause’ has a rhythm suggestive of an industrial, mechanised past Liverpool no longer enjoys. There’s a lot of contrast between the sometimes raw, dirty vocals and the more harmonious sections, yet the whole piece hangs together perfectly.

The spoken vocals bristling over the rich, evocative guitars give ‘It’s You’ a gentle introduction, I thought Digsy’s vocals were a little jarring at the beginning, but they soon reached their full potential. The lyrics hold lots of local references, giving me a wry smile at times. The Sums have chosen this as a single. I can see why; it’s a strong offering.

‘I’m Not Very Good’ is another solid indie song, billed as featuring Dave McCabe of The Zutons, another Liverpool stalwart. It’s melodious and expertly produced, in keeping with the rest of ‘Start at the finish’, but there are better tracks on the album.

The club-synth intro of ‘Hose Me Down’ is the perfect base for the layered guitars, augmented by the upbeat rhythm and smooth yet snappy vocal content. This track is another winner, made by the sublime vocals and overall polish of the music. Perfect and beautiful; a definite for my early 2015 playlist.

The last four tracks were decent, but too standard for such an inventive album. ‘Vegetable’ is the strongest, a real tune, as they say. Still a good Indie track, it’s not as interesting as ‘Nobody’, either musically or vocally. ‘Maybe One Day’ has a soft, laid-back vibe. The messy, sliding guitar of ‘Bad Move’ just about hauls this track above the mainstream. The final track, ‘Something’s Afoot’, had one of the best intros I’ve heard for a long time. I would have liked more of it bringing into the main part of the song, rather than the lack lustre attempt at a few buried snatches found here. There’s nothing intrinsically wrong with the track, it’s a bit of a missed opportunity, though.

This is a strong second album which perfectly showcases the accomplished music The Sums produce. The band seem to be relaxed and confident, musically mature enough to recognise their strengths and play to them. They’ve taken the time to experiment, for the most part successfully, yet haven’t lost the edge or wandered off the musical path into the overgrowth of noise surrounding it. There are a number of stand-out tunes here, but the rest of the tracks on the album are enjoyable too. If you like well played alternative rock with shed loads of melody, I would recommend ‘Start at the Finish’.  A quality album from a quality band.

The Sums can be found online here: thesums.net (but it’s currently unavailable.) They’re also on Facebook and tweet as @thesumsmusic.