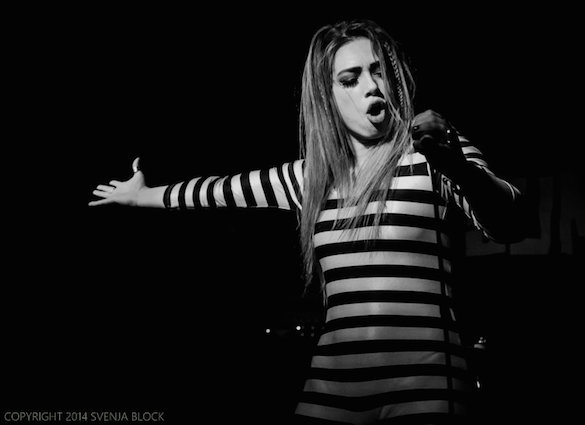 If you’ve run out of cat videos to watch on YouTube, you might want to check out some of Sumo Cyco’s home made music video creations. In true DIY fashion this Toronto based band seem to have done everything a record label could do for them and more. From making their own merchandise, to hiring a tour van and hitting the road – this band has really put in one hell of an effort for the fans.

Recently they piled themselves and their gear onto a plane and embarked on a self funded tour around parts of Ireland and the UK. After rocking up at Indie Week Festival last month in Limerick, they made their way to England’s capital to play at the O2 Academy, Islington.

If you’ve been there before, you might think it’s quite a large capacity venue for an independent band to fill, especially on a Wednesday night … and you’d be correct. However, there is an upstairs section that is perfect for such an occasion. It feels a little more akin to a bar than to one of the other O2 venues, such as the O2 Academy Brixton which can hold almost 5,000 people. Although, it’s fair to say that getting anyone to attend a midweek gig in London is a near impossible task. But somehow, Sumo Cyco managed to pull it off. 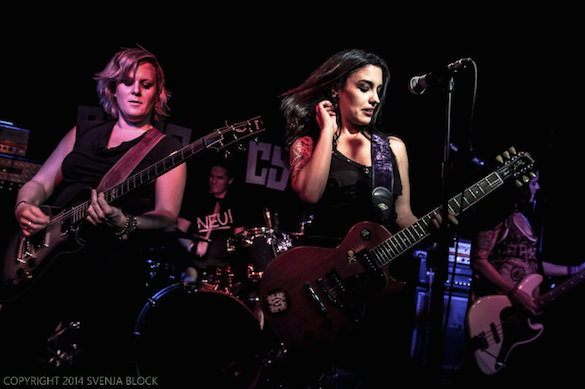 Both support acts were fantastic, especially that of Gasoline Thrill (see photo above) who delivered a powerful performance and got the crowd exercising their vocal chords and stretching their dancing legs. A predominantly female band [with the exception of the drummer], they have also managed to bag a slot at this year’s Rebellion Festival. So if you’re going along, then please do check them out, you will not be disappointed.

As the time drew nearer for Sumo Cyco to make their London debut, the audience almost doubled in size. Standing over by the merchandise stall were a few members of the band. Not ones to shy away from their fans, they chatted and mingled happily. Guitarist Matt Drake [aka Dodger] told me of how their tour was mostly being paid for from their t-shirt sales at gigs and how he and the rest of the band were extremely grateful to have such an amazing fan base., a fan base that make it all possible for them to be on tour, living the dream.

One by one, the band had disappeared from the crowd and just a few short moments later, the Canadian four piece jumped on stage. Dressed for the occasion, drummer Andy Joseph [aka The Wolf] donned a Union Jack vest and matching boxers. He stood on the drum stool and posed for photos. Guitarist Matt said into the microphone “As you can see, our drummer is clearly stoked to be here. We all are!” His words were met with cheers and applause from the crowd which grew louder as Skye Sweetnam [aka Sever] joined her troupe. Wearing a black and white, skintight, striped onesie, she yelled “How often do we get to say this … What’s up London?” 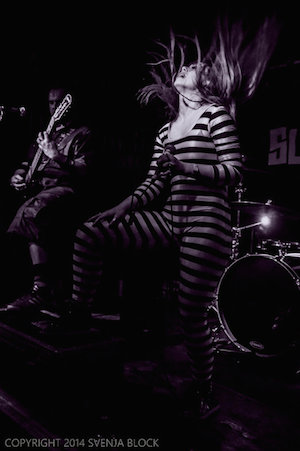 The academy erupted as the show kicked off with the band’s most famous release, Interceptor. A wise choice of song for opening the set as the music video had reached over 5 million views online. Bearded bassist Ken “Thor” Corke stood on top of the feedback monitors at the edge of the stage and swaggered along to the beat, reminding me a little of Muse bassist, Chris Wolstenholme. Skye confidently embraced the atmosphere and danced with the crowd. The energy coming from all four of them was astounding and the fans mirrored that energy to the point of nearly bouncing off the walls. Before every track, an intro was played from an old school tape deck. During a short interlude, Skye made her way up to the bar, greeting people along the way. She climbed onto the bar itself and resumed her performance from there. Near the end of the song, she leaped off and returned to the stage, proving that Skye was clearly willing to go above and beyond to make her shows a memorable experience for everyone who came. A refreshing change from the singers who stand at the microphone with their eyes closed, praying that they hit the right notes.

Songs like Do What We Want and Go Go Go fused some catchy pop melodies with punk and metal inspired lyrics. Where other parts of the set like Fighter and Danger sounded more influenced by bands such as Korn or Disturbed. With all the different styles thrown in the mix, Sumo Cyco had enough diversity to please everybody, no matter what tickled their fancy. Over too soon, the final track Limp was lively and passionate throughout. The audience screamed along until the last word had been sung and the lights came back on.

After the show, the band mingled once again. Getting to know the fans and connecting with their audience is certainly important to them. In high spirits, the band managed to sell a few more t-shirts, which would no doubt contribute towards another tour somewhere in the world. London is very much looking forward to seeing the return of Sumo Cyco. Let’s hope we won’t have to wait too long. But I’m sure that when they do come back, they will be playing bigger venues and to bigger crowds.

It’s no secret that the music industry is becoming harder to break. But it’s a wonder why anyone would want to pin their hopes on a pipe dream like signing to a major label. All around the world there are artists wishing they could play at a venue like the O2 Academy Islington, gather millions of views on YouTube and win prestigious music awards. Well, Sumo Cyco have done exactly that and with no help whatsoever from a contract that would probably leave them with little to no control over their own music, style and content. It’s inspiring and I’m sure it wasn’t easy for them but I hope this is the start of a trend among unsigned bands. If Sumo Cyco can remind other artists that it’s meant to be about the music not the money, then they have done more for music than any signed band has in the last decade.

All words by Acey Eliza and all photos by Svenja Block. You can read more from Acey at her author’s archive here and see more of Svenja’s photos at her Flickr or on Facebook.

March 30, 2020
0
Retrophonica – Aetheric Transmissions is a charity compilation released by Wormhole World and curated by John from...
Read more

May 31, 2014
We use cookies to ensure that we give you the best experience on our website. If you continue to use this site we will assume that you are happy with it.Ok