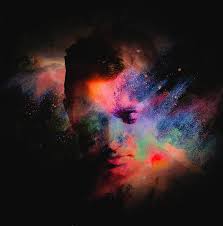 An album title that sounds like it should come from a band of Alpha male, brawny leather clad rockers. You couldn’t be more wrong. The singer, songwriter, doctor, dreamer has a typically unassuming but classy new album out.

Google the title and expand it to ‘Inter’galactic and you may find, as did I, that it’s also “an impossible dating sim.” And that’s where I got lost and returned to the safety of the super galactic splashes of colour that adorn the album cover like a cross between a  controlled Holi festival  and the inner sleeve to Steven Wilson’s To The Bone. A cause for celebration indeed as Sukh’s Kings album back in 2013 (really? Was it five years ago?) was one we – that’s the royal ‘we’ meaning ‘I’ – really enjoyed.  So yes, it’s nigh on time we found out the results of what’s been on his musical agenda over the last five years.

From a recent night out getting blasted by The Blinders to an afternoon soaking up the relaxing and friendly sounds from Sukh’s latest platter is about as far removed as you can get. Back in 2013 we talked about the  Kings  album being worth an extra bar on the electric fire as the nights start to draw in. Bang on cue, Galactic Love Machine is ready to warm the cockles just as the clocks go back. Although it’s often a pleasure to see and hear Sukh play simply armed with an acoustic guitar,  his band also add a certain low key but tasteful backing, his forte comes with  the grander arrangements he dreams up that  on GLM come from the UK Gospel Choir and the Up At North Orchestra.

However, there’s more than enough room for him to showcase a selection of work that ranges from finely crafted pop sensibilities a la Keane with the title track in particular an early highlight and saturated with earworms and hooks. In an album of allsorts, there’s a  couple of little mid album funky numbers – Dance On Ice and Hail The Sun where the brass gets broken out big time (“I’m always moving even when the Earth is asleep” he sings – typical of his multi-tasking lifetsyle) while Mystic is as close as you’re going to get to Sukh getting down and dirty in a Prince styled groove. Zoe Rozar joins Sukh for a soul show duet on Revolution and washes of synth and an underlying electronic sequence adds variety in Diamonds where Keane and the Pet Shop Boys collide.

Coming full circle, a  final return to more standard Sukh leaves us satisfied with  both a welcome return and that cosy glow that we were hoping for. The unassumingly  humble air that pervades his work is thoroughly reinforced on Galactic Love Machine; an album of smooth and classy style.

The official music video for Flight: