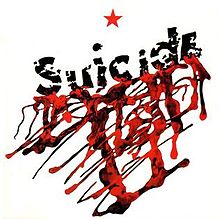 With this month seeing the third anniversary of the death of Alan Vega, Amy Britton looks over the legacy of Suicide, in particular the impact of their visceral debut album

New York music, 1977. The wave of American punk which had blended the coolly bohemian with the wryly insouciant, turning the Beat Generation into the blank generation, had already left quite a mark on the world as the punk movement as a whole accelerated with the breakneck speed it was perhaps always born to, “burning brightly with self-immolation,” as Arthur Rimbauldt once said. The underground had to keep moving forward.

Imagine, then, in 1977, just what the debut album, the duo comprising vocalist Alan Vega and multi-instrumentalist Martin Rev, must have sounded like. Those fatigued by punk didn’t want to give them the time of day because they thought that was what they were; whereas many punks recoiled at the synths. Consequently, thirty-two years down the line, it simply sounds like a record one step ahead which remains as fresh and visceral as they day it was released. Its an early sign of a forthcoming synth movement that was about to be about paring things back to their minimal bones (or cold mechanical equivalent.) If the visual assault of the  sleeve – nothing but the eponymous title splashed out on blood across an otherwise no-frills design – isn’t enough of a warning to the listener that they are about to be taken on a brutal ride, then opener “Ghost Rider” sets the scene. The sharp loops of synth pound against Vega’s vocals in a way that evokes climbing into a dimly lit lift in a cyberpunk odyssey and stepping out into the future. It gives way in a similar vein to “Rocket USA”, a doomsday voyage along a highway that shoots into future stratospheres, running similar themes throughout the whole album. By the time it’s got to closer “Che,” we are fully immersed; sounds drift in and out along the track in an absorbing fashion which seems to carry the sense of threat.

“Suicide” could, in some ways, be seen as a kind of “Velvet Underground and Nico” type of record were the power and influence it held on those that heard it is a much greater legacy than those who did hear it. No-one is going to claim that its the most accessible record ever made – after all, its best known track is “Frankie Teardrop,” a ten and a half minute slice of brutalism which tells the story of a twenty-year old factory worker burnt out by boredom and poverty who goes home one day and turns a gun on his family and himself. Far from void of shock factor at the time, as the years pass on the “protagonist driven mad by domestic drudgery,” had become a staple of alternative music. (Vega’s lapse from half-whispered vocals into primitive screams in sync with Rev’s build up of jittery sounds remains uniquely chilling, though.)

But “Suicide”s real legacy lies in their complete Derridean deconstruction of the binary between genres. Its a synth recording that takes punk as a kind of  springboard and its simplicity and attitude is splashed all over the album, as are some of the biggest clichés of rock’n’roll as we know it. I don’t mean that as an insult, either. The delightful ridiculousness of rock’n’roll mythology and imagery form the albums heart. Images are lyrically evoked throughout of Leather, boys called Johnny (who  cruise the night looking for love, feeling mean and acting tough),  motorcycle gangs; but throwing the whole sunglasses-after-dark vibe over cold synth loops means that the landscape these characters are navigating is very much a futuristic one  which is much “Alphaville” as it is “The Wild One.”  Vega’s vocals at times sound like an Elvis impersonator who has started to have a panic attack and decided to lapse into avant-garde lettrism instead. It’s pretty much the opposite of post-rock; taking traditions and putting them against what was then a “non-traditional” instrument. The album was much more revered upon release by critics in the UK than by critics in the USA, and its impact certainly seemed to be felt quite immediately here – listen to trailblazing British songs released shortly afterwards, such as The Normal’s “Warm Leatherette” or Human League’s “Path of Least Resistance” and the impact of Suicide seems hard to deny.

The use of Suicide’s  blissed out song “Dream Baby Dream” (released as a single in 1978) on a woozy Sofia Coppola-directed advert for Marc Jacobs perfume, may have done much to bring them to wider attention, three decades after they made their own metallic mark on the musical landscape. But even without this, their legacy – of the concept of “electro-punk”, of synth-built simplicity mixed with soundscaping, of just a general ripping up of the rule-book, is something that stands the test of the time and sounds eternally futuristic no matter how far into the past it moves.