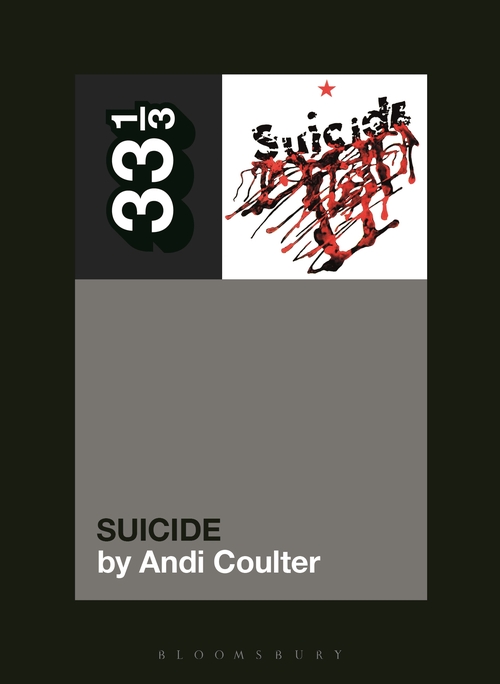 New York City in the 1970s was an urban nightmare: destitute, dirty, and dangerous. As the country collectively turned its back on the Big Apple, two musical vigilantes rose out of the miasma. Armed only with amplified AC current, Suicide’s Alan Vega and Marty Rev set out to save America’s soul. Their weaponized noise terrorized unsuspecting audiences. Suicide could start a riot on a lack of guitar alone. Those who braved their live shows often fled in fear–or formed bands (sometimes both). This book attempts to give the reader a front-row seat to a Suicide show.

Andi Coulter has pulled off a neat trick; through the course of her examination of the self-titled debut album from Suicide she has not only been able to provide an access point to this most difficult of musical creations, but to arguably provide a companion piece to the weighty Kris Needs book ‘Dream Baby Dream: Suicide: A New York City Story’.

Initially formed in the early 70’s by Alan Vega and jazz experimentalist Martin Rev, essentially as an artistic protest at the US involvement in the Vietnam War. By the time they were linked to the cities emerging CGGB’s punk scene Suicide were already seasoned antagonists; Vega stated to Kris Needs “We were living through the realities of war and bringing the war onto the stage… Everybody hated us”. Let’s not forget, this is the band the Clash took out as support for their 1978 ‘Out On Parole’ tour – they were hated by audiences, Vega revelled in the crowds distress, openly taunting them; in Glasgow an axe was throw from the crowd at his head!

Despite this Suicide have gone on to be considered one of the most influential bands of all time; Bruce Springsteen created his ‘Nebraska’ album with the band in mind and later covered ‘Dream Baby Dream’, a song he continues to perform live. When Vega passed away in 2016 Springsteen wrote a eulogy “The blunt force power of his greatest music both with Suicide and on his solo records can still shock and inspire today”. Other artists to both cite influence and cover material include The Horrors, M.I. A, Primal Scream, and SUNN O))).

Coulter, without becoming bogged down in the minutia details Martin Rev’s jazz background, his tutelage under Lennie Tristano, and his earliest live performances with the band Reverend B, whilst at the same time shining light on how Vega (by reason of insanity) dodged the Vietnam draft, ditched his birth name of Alan Bermowitz and transformed into Alan Vega, artist and how a chance meeting in Manhattan would influence modern music for the next 50 years.

Coulter essentially coveys the history of the band in a semi-fictionalised manner, that is the freedom that Bloomsbury allow the authors of its 33 1/3 series. The book is accurate, bar the strand at each chapter beginning linking the band name with the Stan Lee authored Ghost Rider stories – everything else is there, how Marty Thau signed them to his fledgling Red Star label before transporting Suicide to Ultima Studios to capture (in just four hours) the bands set under the production of Craig Leon who is quoted as describing the sound as “the future of music”.

The conversational recounting of the band’s first trip to Europe and the UK, makes for easy reading, how a 16-year old Bobby Gillespie witnessed the band and described the sound “as music from another planet” – but, certainly for my own analytical mindset it rather glosses over for instance how the band achieved UK and European release of the album, the reaction from record buyers – just how many copes did the album sell upon release? None of this detracts from the overall aim of the book, which Coulter notes is “a book for people who love Suicide, and maybe even more for those who don’t”

The text is accessible, the neat compact size of the book is a delight, it’s a book that could be read over a couple of commutes; and as we approach Christmas Day it would form an ideal gift for any inquisitive music lover.