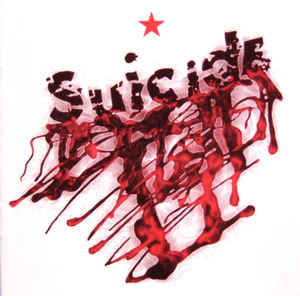 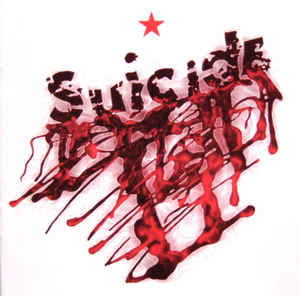 Reissued on July 12 on CD/DL/LP

The remastered re-release of Suicide’s landmark debut album from 1977, with 28-page booklet and previously unseen photographs, reinforces its status as an influential landmark in music history.

Brian Eno famously said of the first Velvets album that it only sold 10,000 copies at the time but everyone who bought it formed a band. It’s unlikely that Suicide’s debut sold anything like that many copies, but its influence has continued to infect music for more than 40 years. They were the prototype for minimal electronica, the template for techno, and the spark that lit the industrial revolution in music, as well as the catalyst for post-punk, synth-pop, noise and much more beyond.

Listening to this newly remastered and lavishly packaged re-release – the CD coming in a hardback cover containing an exhaustive essay on the album’s context, craft and legacy by John Doran – it sounds as transgressive and confrontational today as it did upon its original release just after Christmas 1977. At the time American critics were unimpressed (Rolling Stone thought it “absolutely puerile”) but our own music papers (NME, MM, Sounds) embraced it for the landmark record it was. Today it still sounds like nothing else before or since.

Many have tried to bottle the sound of Suicide but few have come anywhere near to recreating its formula because they are a one-off: a group formed by an experimental visual artist and an experimental jazz musician with an interest in electronics. It shouldn’t have worked but it did: Martin Rev’s harsh electronic beats and waves of distortion smothering achingly beautiful melodies, combined with Alan Vega’s reverb-drenched bartitone croon – a kind of Elvis Noir.

Their unique sound drew on Vega’s childhood love of doo-wop and early rock’n’roll while presaging a new hi-tech future where anything is allowed in the name of experimentation, wrapped in Artaud’s dictum about breaking down the barriers between artist and performer. Famously/allegedly the first band to use the word ‘punk’ in connection with music (in a 1970 Village Voice ad for a gig), Suicide were effectively punk before punk rock, staging confrontational live events where the few audience members brave enough to attend were threatened if they looked like leaving.

Like their primary inspirations The Stooges and MC5 – whose 1969 gig together in New York first inspired Vega, a budding visual artist, to turn to music as performance – Suicide were all about breaking the rules, but also about breaking the boundaries of music. Supporting The Clash in the UK in 1978, they were pelted with beer bottles – full ones – by arriviste punks offended by the absence of guitars; notoriously, at another gig an axe was thrown at Vega’s head.

Side one of the original LP (available now in blood red vinyl to match the iconic cover design of blood seeping from their band name) beneath a then-provocative red star, gives us a handful of songs that are simultaneously pure pop and avant-garde experimentalism, the sinister throb of Rev’s rhythms contrasting with the shuddering croon of Vega’s voice, interspersed with yelps, barks and bloodcurdling screams.

It was (and still is) a unique sound for which the only real parallel at the time was David Lynch’s similarly discombobulating film Eraserhead, released the same year, which did for film what Suicide did for music. They would have made perfect partners.

Lyrics were cryptic, in the spirit of the Ramones, and either nihilistic, as in the sinister but sensual Ghost Rider (“America, America is killin’ its youth”) and urgent Rocket USA (“It’s doomsday. Doomsday“) or a Lynchian pastiche of Fifties and Sixties pop, like the two ballads Cheree (“My comic book fantasy”) and the melodramatic Girl (“Oh girl. Turn me on… Oh girl. Touch me soft”) that conjure images of miniskirted girl groups with beehives doing synchronised dancing.

Johnny, a song that would have perfectly soundtracked Kathryn Bigelow’s biker film The Loveless a few years later  sounds like Gene Vincent from beyond the grave (“He’s looking so mean, he’s feeling so tough”) with its double-tracked vocals drenched in reverb adding a sinister twist. The album’s closer, Che, comes as close as any song here to social comment, mocking the lionisation of revolutionaries in a lyric that’s unlikely to win any awards for poetry (“He’s wearing a red star. Smoking his cigar / And when he died. The whole world lied /They said he was a saint. But I know he ain’t”).

Throughout the album, the metronomic pulse that channels the motorik rhythms of Krautrock fellow travellers like Can, Neu! and Kraftwerk is overlaid with twinkling melodies – often on an antique Farfisa organ – but the prettiness is counterbalanced by Vega’s nervy, unsettling vocals and Craig Leon’s spacey dub-like production, all reverb and delay, influenced by his previous job working with Lee ‘Scratch’ Perry in Jamaica, the final result being tweaked by the band’s manager, Marty Thau, who also owned Red Star, the label on which the album was first released.

The result is something you might call Uneasy Listening. Never more so than on Side 2’s pièce de résistance, Frankie Teardrop, a ten-minute nightmare about a young factory worker who, unable to feed his family or pay the rent, kills his wife and child before committing suicide. Vega’s blood curdling screams, echoing out of the speakers or headphones, are not just chilling: they are genuinely terrifying. The song’s conclusion, (“We’re all Frankies. We’re all lying in hell”) hardly helps lift the mood of abject despair created by Rev’s relentless music and Vega’s desperate vocal. It’s not a track you’re likely to play on repeat.

So there it is. One of the seminal albums of all time. Yet for all its influence – Bruce Springsteen, a self-avowed fan who covered Ghost Rider, named them as the primary inspiration for his stripped-down Nebraska album –  few bands actually sound like Suicide. The duo, who are no more following Vega’s death in 2016, remain unique. This album remains one that should be in every record collection, irrespective of your preferred musical genre. It’s that good.

Suicide on Facebook and the personal sites of Alan Vega and Martin Rev.