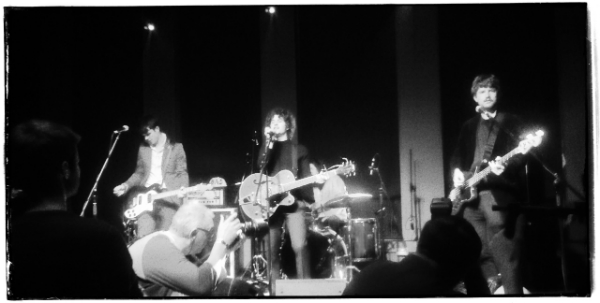 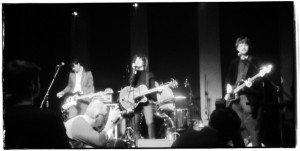 Sugermen
Liverpool
May 2014
Live Review
It’s now Saturday, my feet are sore, I’ve been standing, listening to more bands than than I thought was possible. But that’s not a complaint, quite the opposite, I’ve had a great time on my musical equivalent of a pub crawl at Liverpool’s Soundcity. So much to see, so much to listen too, i’m spoilt for choice really, but like a greedy kid in a sweet shop I take as much as my pockets will hold. And more.
I have the app, the digital version of a band, bingo card, I wander from venue to venue –  Got it, got it, got it, haven’t, go it… I saw The September Girls, sublime, The BBC Radiophonic Workshop, a magical blend of pension books and a Moog. Genius. Fat White Family, the love child of an illicit affair between The Fall and The NewYork Dolls. Got it, got it, got it, haven’t….
Then I saw Sugarmen, four lads with guitars.  Watching them reminded me of seeing The Clash or The Jam but with a modern twist. I saw a lot of bands during Soundcity and enjoyed them all but this rock n roll collective was a wake up call. A call to arms. A packed venue bounced as they railroaded through a set of high energy power pop songs, playing like the Clash at Eric’s or the 100 Club, these boys own the stage. Too young to be veterans of rock n roll but somehow play it like they’ve been doing it all their lives. They’ve taken the best bits of these bands and made it their own. Each song raising the hairs on my neck.
The lead singer’s voice could fill a stadium, bass lines stuffed with melody, drums that sound like missing tracks from London’s Calling and lead guitar that nods a wink to Mick Jones. There’s a lot of influences in there but they’re not a photocopy of a record collection, they’re what happens when you HAVE a record collection. Bit like going to a gym but not a place filled with dumbbells and smelling of Deep Heat, this is a gym filled with music and smelling of vinyl. Sugarmen have been training.
Are they singing about protecting the NHS? they are, they’re singing about something important. ‘Nothing But Respect’ follows in the same tradition as The Jam, The Clash or The Specials, take an important issue wrap in up in a bouncing melody and let it fly. Young people voicing an opinion about their future, our future and using music as a vehicle. Each song feels like someone is shaking me and shouting wake up, wake up and I have. I rub the sleep from eyes and do you what? I have a much better view.
Got it, got it. Get it…
Do you remember the saturday gigs
We did, we did
Do you remember the saturday gigs
We did, we did
Review by
The thin white duke.