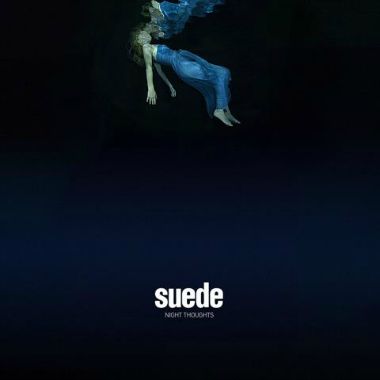 2013’s Bloodsports, their sixth album, was in my opinion, the absolute best Suede have ever been. It was monumentally good. Every song was Perfection.  I saw them on the tour and they were fabulous.

…and I don’t even like Suede that much, or rather didn’t. Or didn’t think I did.  Or deliberately avoided liking them or professing to. but, in the words of Ronnie Corbett, I digress…

Night Thoughts is an epic, grand, dramatic album. A modern, gothic romance about love, life and death. It has great guitar-playing and songs which sound emotional and full of desire and regret.  The title spoils it somewhat by being too much like the title for an 80’s Channel 4 Arts discussion programme.

Brett Andersen is in fine voice. As you get older your voice tends to deepen but Brett still hits some high notes seemingly effortlessly. He does look like Richard Maddeleys cooler younger brother it has to be said. His admission (on a recent radio interview) to playing Crass ‘Feeding of the Five Thousand’ at the wrong speed as a youth and then not being able to love it as much at the correct speed endeared me to him.

Much has been made of the fact that Bloodsports came out the same time as Bowies the Last Day and now this album again has been ‘eclipsed by Blackstar and the death of David Bowie’.  Without Bowie  hundreds of great bands probably wouldn’t’ve existed, Suede among them.  I resisted re-visiting Bowies music immediately after the bombshell of his passing and during BBC 6-Musics extended Dianafication. But I did buy Aladdin Sane on CD the day that Night Thoughts arrived.

It’s completely and utterly wrong to attempt to compare the two (but you’re gonna do it all the same -Ed) but Aladdin Sane is such-unsurpassed-genius, so sexy, imaginative and exotic that Suedes dramatic yet down-beat emotional rollercoaster pales by direct comparison.  That said, Suede are one of the Best Bands in the UK currently and at an artistic peak.  I can therefore finally (Doh!) understand why Bowies passing has been reported as the Death of Popular Culture. He set a standard no-one can reach.

Suede in my personal opinion, were overshadowed initially by the Manic Street Preachers.  A completely different proposition again maybe, but the one which commanded all of my attention and devotion leaving no room for Brett and co.   I also found Bernard Butler an annoying , over-rated character and musician.  In a reverse Rolling Stones / Brian Jones scenario Suede just got better and better after he left. Coming Up and Head Music topped the eponymous debut and much over-rated Dog Man Star in my book.  But what do I know?

“Have Suede Re-invented the album?” gushed some tool from the Telegraph – well, no they just haven’t left any gaps between songs and have soundtracked a filum – which you can buy as a DVD with the album.   Personally I’d say stick to the music as the visuals look fucking depressing, although nicely shot and edited.

It amused me no end to hear Brett sing the words ‘tracksuit trousers’ in ‘No Tomorrow’. I imagined a look of disgust on his face.  And its ‘bottoms’ not trousers.

‘Outsiders’ riffs a bit on Siouxsie and the Banshees ‘Monitor’, which was cool. But Night Thoughts has the dark epic grandeur of Lou Reeds ‘Berlin’ shot through it stick-of-rock stylee.  Some of the more shoe-gazey sections of ‘Pale Snow’ though are reminiscent of 10cc’s I’m Not In Love rather than anyone else from the Dream Pop catch-all.

There are some nice Roy Budd style harpsichordy tones and structure (soundtrack composer of Get Carter theme fame) in ‘Learning To Be’ and the future-classic ‘I Can’t Give Her What She Wants’.

‘What I’m Trying To Tell You’, the nearest Suede get to funky,  is so incredibly Pet Shop Boys it could have been written for them,  right down to a spoken section where Brett sounds very Neil Tennant.

The ‘Fur and Feathers’ finale too is full of melodrama and has all the epic grandeur of  Marc Almond at his very best.

Somehow Suede pull of a neat trick of making an album that is pure pop, mature 21st century Glam and overblown dramatics seem like it actually has some gravitas in among the self-absorbed lyrical concerns.

Like Bowie taught them, Suede do not write autobiographical confessionals; these are artifice and constructs – Pop Songs, Rock Songs. but very beautiful, artful and dramatic ones they are too.

Despite my misgivings about Suede, despite my piss-taking and despite myself, I do actually really, really like Suede and Night Thoughts is absolutely brilliant… and only likely to be bettered by Savages album this year…..

*Night Thoughts is out now on CD as a standard or deluxe version that latter comes with a DVD and as a double heavyweight vinyl. There is also a Special Collector’s Edition that comes with 2 exclusive prints and the album is also available as a download.