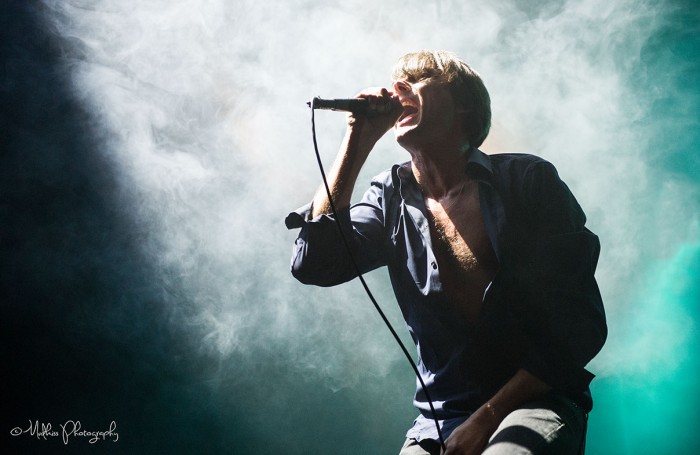 Manchester’s Albert Hall’s intimate splendour plays host to an evening with Suede as they perform a rare two-part show to accompany the release of their seventh studio album Night Thoughts. Louder Than War’s Katie Clare and Melanie Smith went along to witness the band accompanying the Night Thoughts film directed by Roger Sargent as well as a set of classic Suede tracks.

A floor-to-ceiling fine threaded net hangs between the audience as Suede play Night Thoughts in full and in order while projected on to the fluid mesh Roger Sargent’s harrowing tale of the same name. Drained of any wistfulness and colour vibrancy, bar the Neo-Dada-esq Like Kids, the story is told in a series of out of sequence chapter’s. The film’s protagonist, at times, seemingly disappearing into an imaginary world of aggression and decadence where he’s more in control than in the grief of his tragic reality. Occasionally the band are made solid when spotlights illuminates them individually; against the film in the foreground they seem like automated figures in a diorama. 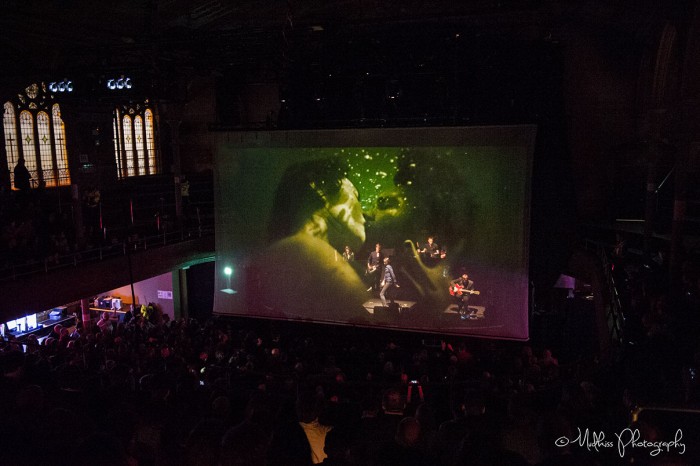 It is a forcefully experience which obliges the audience to absorb the material, not only as a whole rather that piecemeal as we have become more use to doing, by somewhat removing any subjective reading allotting only the raw and brutish feelings of fear and loss, playing on screen,  to permeate the tracks. Brett Anderson throws himself with unabashed melodrama, in spite of the obscured performance, into each track spending a seemingly disproportionate amount of time of his knees. The concept works, to a point, offering an alternative way of engaging with the album although there is a feeling of being a little manipulated – it was the sheer brilliance of the music and Suede’s skillful delivery that this negative emotion is not pervasive. 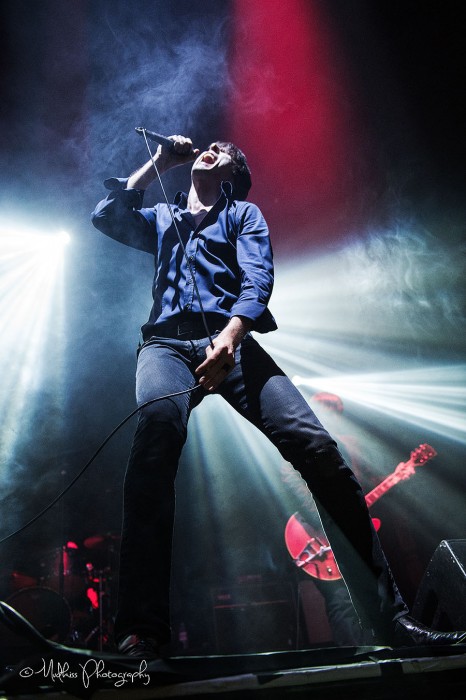 After an extended break while the stage is adjusted for the second half of the evening a classic Suede set: an further impressive 12 tracks. Choosing a mix of songs from their previous six studio albums and even Sci-Fi Lullabies is represented with Killing of a Flashboy. Any restraint taking place prior is thrown aside as Anderson, his shirt entirely unbuttoned for the majority of the time, takes to the audience for a lot of hands on audience interaction, whip’s his microphone he takes his shakes and shimmers on a near constant romp around the stage – working the spotlight like a master most exceptionally during the heartfelt acoustic Everything Will Flow he is at every moment the ultimate front-man.

While it is a given that the, 25 year plus in some cases, emotional history of Trash, Animal Nitrate, Filmstar, So Young, Metal Mickey and Beautiful Ones are going to extend those tracks the honour as particularly special elements of the night they are the nostalgic part of a bigger picture one where Suede have moved forward and taken bold inventive steps not just in what they make musically but in how they present it and for that alone Suede more than deserved the long, thunderous and passionate applause they received tonight as well as our continuous unbroken admiration.

Use of these images in any form without permission is illegal. If you wish to use or license any images please contact mel@mudkissphotography.co.uk.

At present limited numbers of tickets are available for some shows please contact the venue directly or use the Live Dates link on Suede’s official website for the most up to date information. Night Thoughts is out now on CD as a standard or deluxe version that latter comes with a DVD and as a double heavyweight vinyl. There is also a Special Collector’s Edition that comes with 2 exclusive prints and the album is also available as a download. Contact your regular local record store, Suede’s official store or any of the usual music retailers for their individual availability.