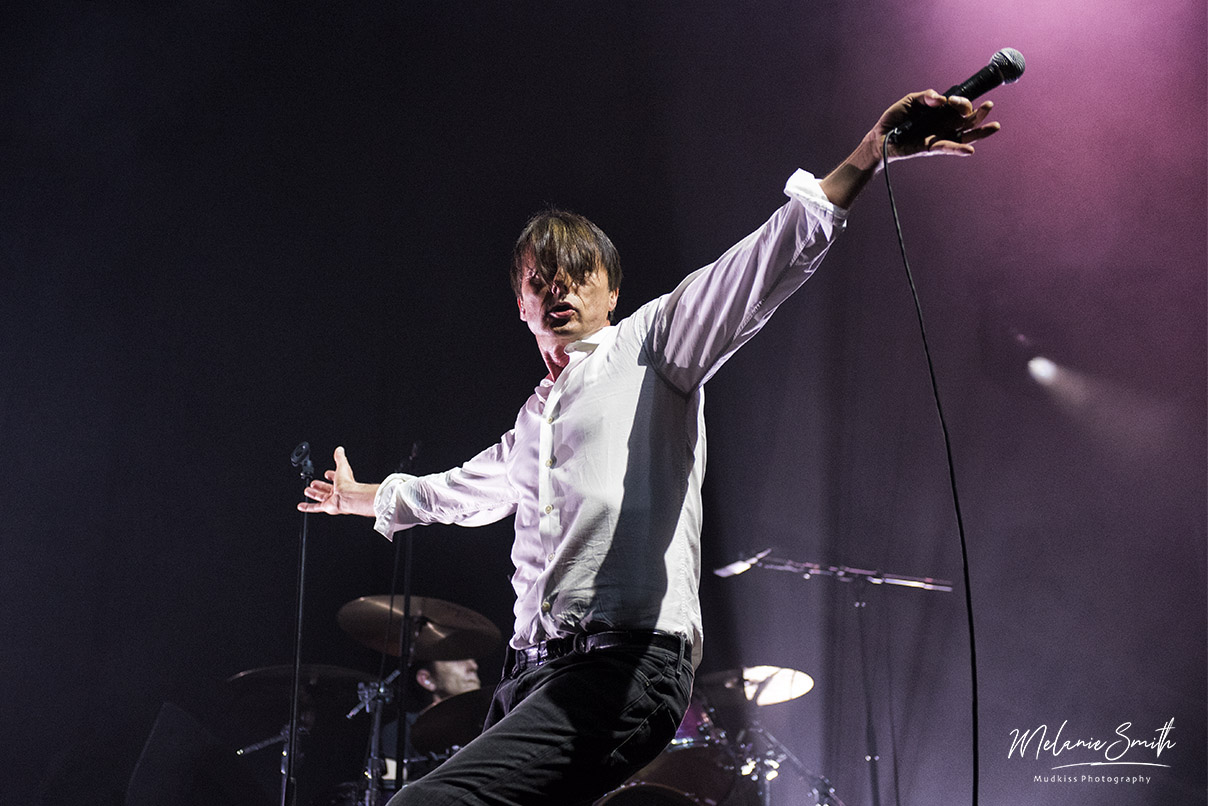 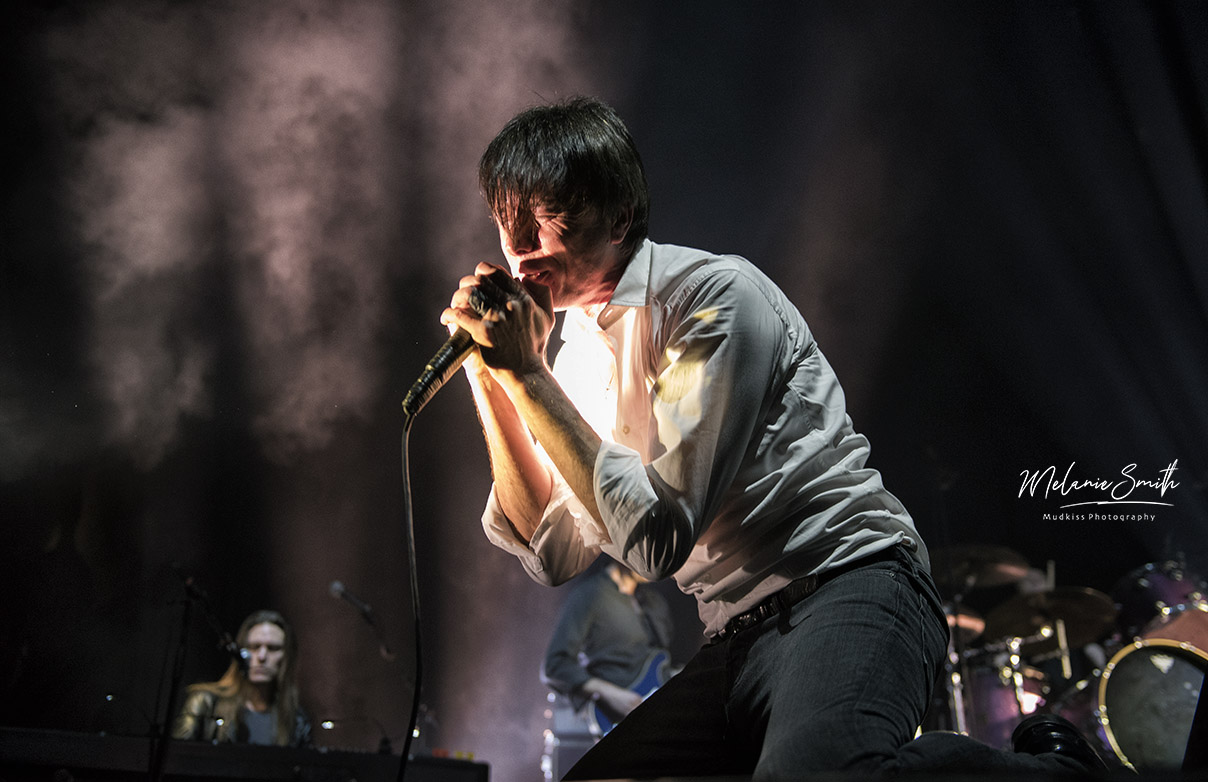 Lee Ashworth finds himself swept up in the glamorous trash of the arch-outsiders as Suede bring their hymns of edgeland alienation to Manchester city centre.  Photos by Melanie Smith.

Brian Christinzio and his band occupy the stage in support tonight as BC Camplight rip through recent tracks from Deportation Blues. Singles I’m Desperate and I’m in a Weird Place Now leap out of the set, the band energised and tight, flanking the stage either side of his piano. A shout of gratitude is extended to Marc Riley, in the crowd, Manchester’s much-loved lynchpin of Indie, as he is credited with supporting Camplight’s recent success. Then the stool waving and the rocking subsides as the hall fills with anticipation for the headline act.

From the ominous stage entrance of As One it is clear that Brett Anderson means business.  He appears jump-started, electrifying and locked onto the moment as though it’s his last.  And what a moment it is.  Despite the presence of six classics from Suede’s eponymous debut, the set list that shuffles back and forth, including tracks from The Blue Hour, Night Thoughts, Bloodsport, Coming Up and Dog Man Star, is testament to the fact that this is no 90’s act trading off the back of former hits.  Even despite the inclusion of songs from the ambitious Night Thoughts, a concept album (aren’t they all?) integrated within the accompanying film, it is clear that although Suede have evolved and changed pace many times since their initial recording twenty six years ago, their work is unified and cohesive, riven through with a distinctive DNA that becomes more apparent with every new iteration. 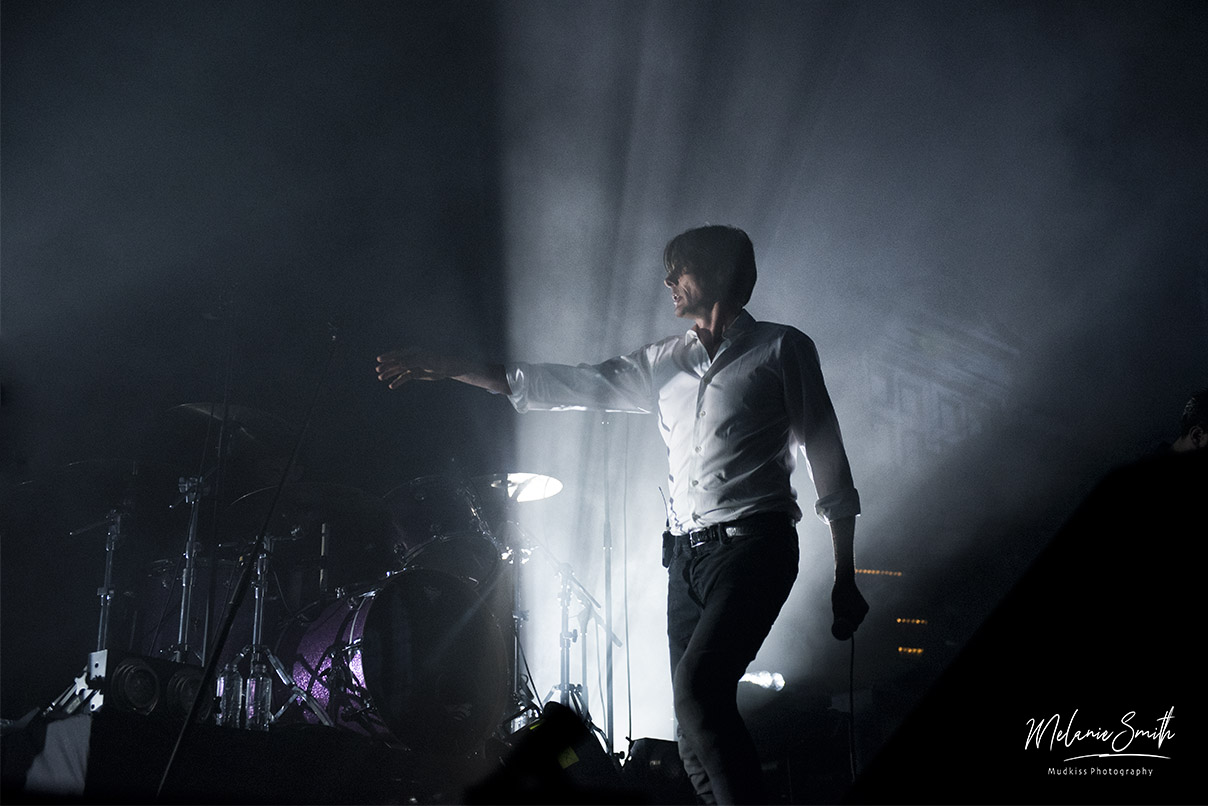 Gloriously, and with paradoxically studied abandon, there is an intense desperation that characterises much of Suede’s lyrics; it is undoubtedly an emotion felt by their audience, it’s in the depth of their drumbeats and those hijacked, skew-whiff guitar riffs that teeter over the edge of the scales.  Tonight, Brett Anderson personifies that emotion, from the flick of his fringe to the black arrow point of his boots as his shadow sharpens over the monitors and his knuckles whiten around the tightly gripped mic.  Tonight, that intense desperation is distilled, through all those components, Anderson and audience, into the chain reaction of this two hour set at Manchester’s Albert Hall.

For many here, I suspect, this is an ongoing journey they have made with the band since the start.  Even before the band take to the stage, with the very last of the light filtering in through the stained glass windows upstairs, this beautiful, sold-out venue feels somehow more sold-out than usual with every last vestige of space occupied, people standing where they shouldn’t be standing because there is simply nowhere left to go.  In the unexpected April heat, the interior of this former Methodist hall begins to condense as shoulders and arms rub, drinks are held precariously and the stage darkens like the coming of a sudden storm. 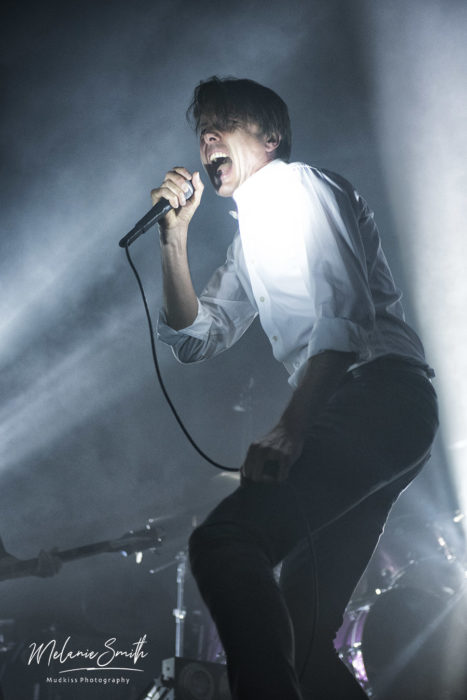 This moment began watching the Brits in 93.  As Brett trembled and shook across the stage then, seemingly barely able to contain that same intensity inside of him, as the guitar lines threatened to shimmy and sway and slide off the screen, ‘in your council home’/in my council home, on a portable TV, in North Wales, a reaction occurred in the nuclear night.

It is clear from the songs performed tonight that Suede is a grand articulation of the alienated, the disenfranchised, the outsider.  They are white, they are male, they are middle class and English but they stalk the edgelands, neither urban nor suburban but somewhere poised between the two seen through a darkly dystopian lens that the characters of their songs inhabit as a reality.  It’s difficult to remember now, how controversial the androgyny of Suede’s imagery was, from album cover, to song lyrics to Anderson’s demeanour and dress-sense.  Equally, it’s easy to forget how much culture has changed and how such things are more commonplace.  Amidst the lad rock of the 90’s, Suede subverted conventional notions of masculinity and tonight, all these years on, every voice in the Albert Hall seems to sing every line, right down the spine, of The Drowners and Animal Nitrate. 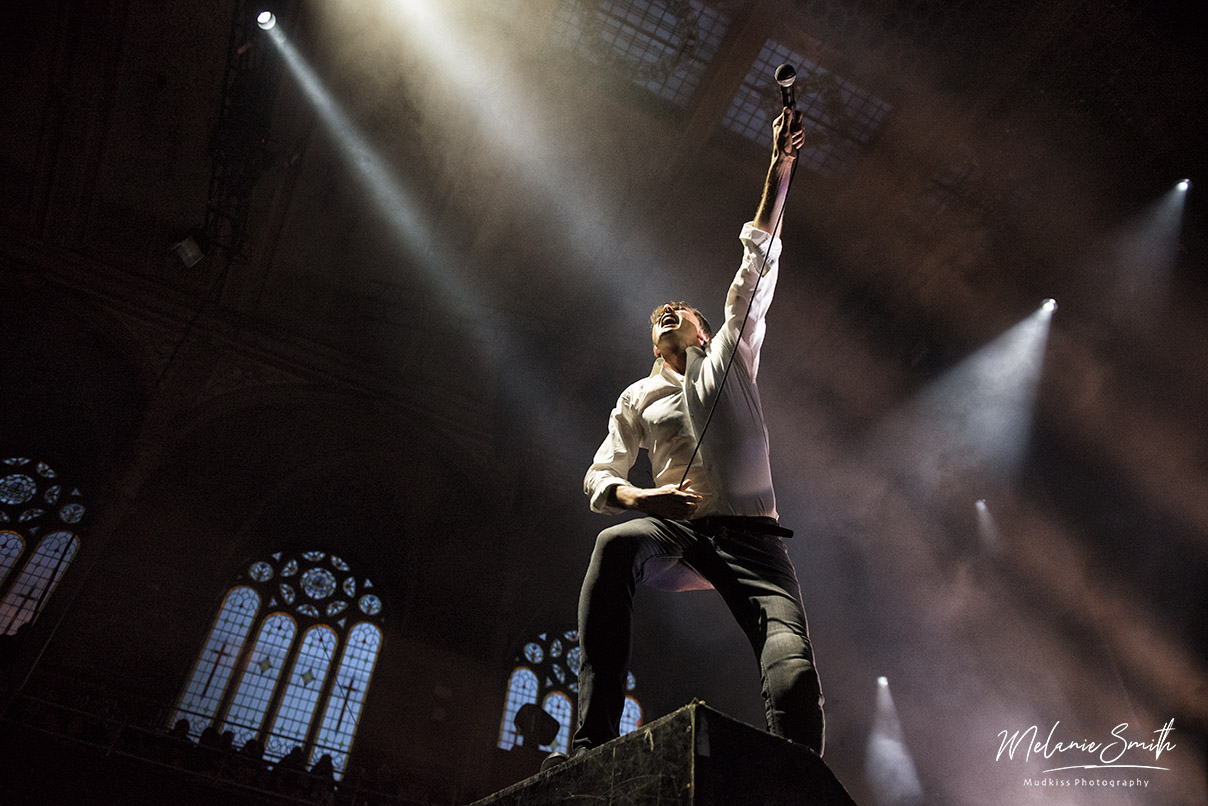 Suede do have a conventional, stripped back stage, and so their theatrical pedigree is perhaps not immediately apparent.  But in the choice of songs tonight it is there in every lyric.  Anderson creates scenarios, desperate vignettes situated in the social realism of tracks such as Animal Nitrate, the Ballardian atmospheres of apocalyptic suburbia in We Are The Pigs and Flytipping, and the more intimate psycho-dramas of The Invisibles and I Don’t Know How To Reach You.  For other songs, Anderson immerses himself in the role of the confidant in the hauntingly sepia-tinged Sleeping Pills, pleading with the audience not to take them, and a circus-hand stepping out from beneath his costume, casting a weary glance at the way his life is sliding during a solo acoustic version of Pantomime Horse.

More than anything, from the start to the end, every line, every note, every breath is made with utter conviction and that, ultimately, is the secret of Suede’s longevity.  The audience knows it.  Suede’s moment continues.  Still taking me over.

Watch the video for Wastelands from The Blue Hour here: