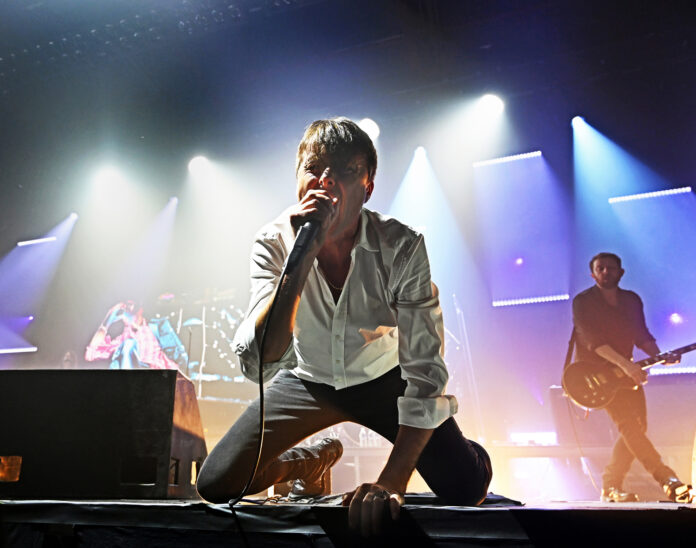 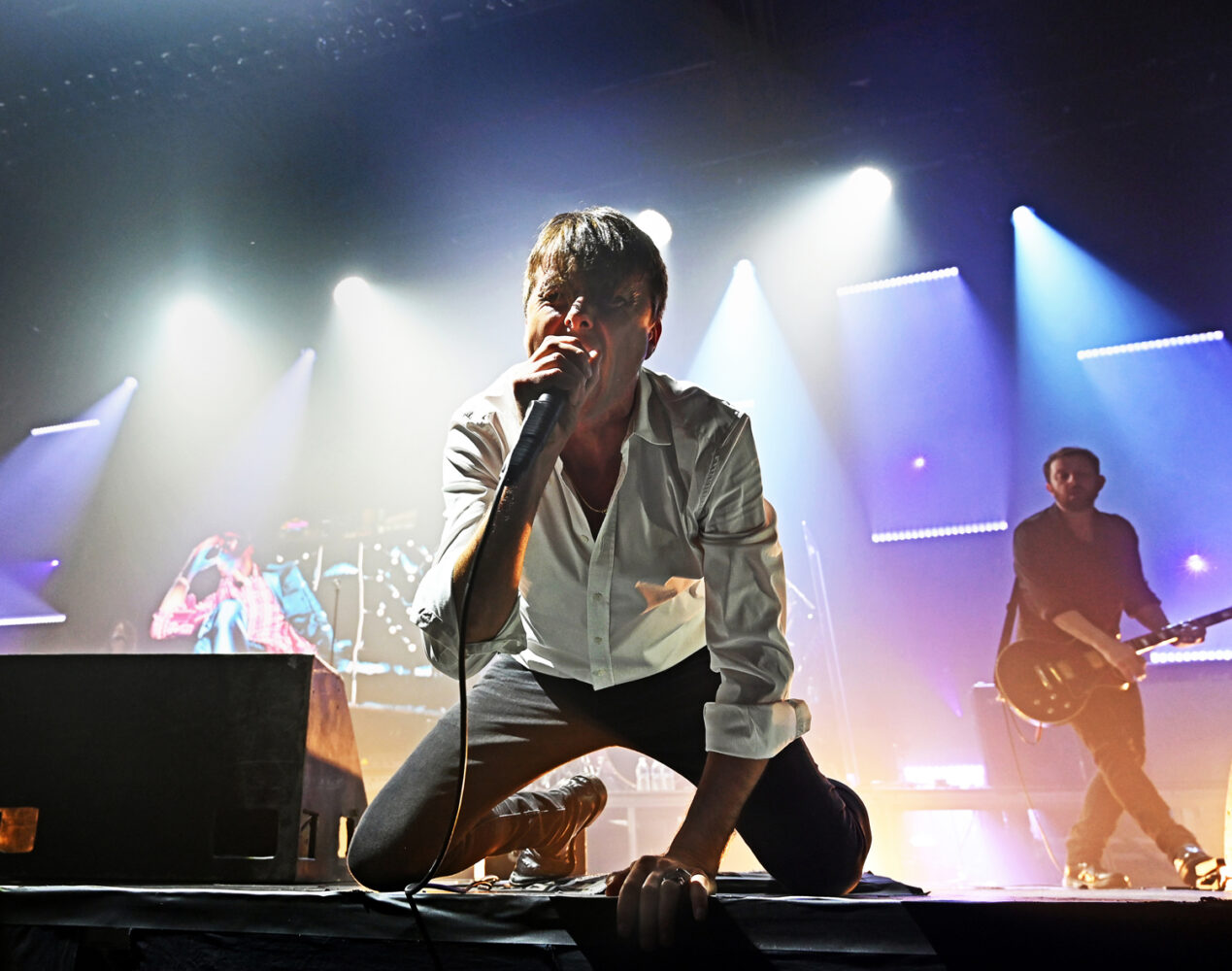 Supported by the excellent Nadine Shah, Suede remain the great survivors of the early ’90s and as they pay tribute to a quarter-century of Coming Up they show no signs of being ready to slow down as they approach their 30th anniversary.

Suede. The great survivors of the 1990s. As we move towards the thirtieth anniversary of their debut single next year (someone please tell me where my life has gone, if you kindly would?) they occupy a place of statuesque grandeur and continued contemporary appeal. Their great friends/rivals (delete as appropriate) have moved on or vanished – Blur are in comfortable late semi-retirement, Pulp have likely flowered for the final time and the prospect of Oasis reforming anytime soon is a thoroughly depressing concept to behold. Yet Suede continue – emboldened by some glorious late-period records (2013’s Bloodsports and 2018’s The Blue Hour being especially striking) and their continued ability to remind the world of that glorious rush of hedonistic and lysergic glamour from the early to mid-90s. And they are far from finished, even this late in their career…

Though Manchester’s Victoria Warehouse has some limitations as a venue in terms of getting in and out of the main room, the sound tonight is superb – clear, perfectly balanced and nicely up on the volume control. Support act Nadine Shah takes full advantage with a set that is a brooding, polyrhythmic joy. Continually teetering on the edge of fury and prowling a line between a brooding anger and continual unease, she demonstrates precisely why she is one of the most consistent and interesting artists of the last few years. Opener Fast Food unfolds steadily and cinematically whilst the dark claustrophobia of Holiday Destination growls and swirls in the air. 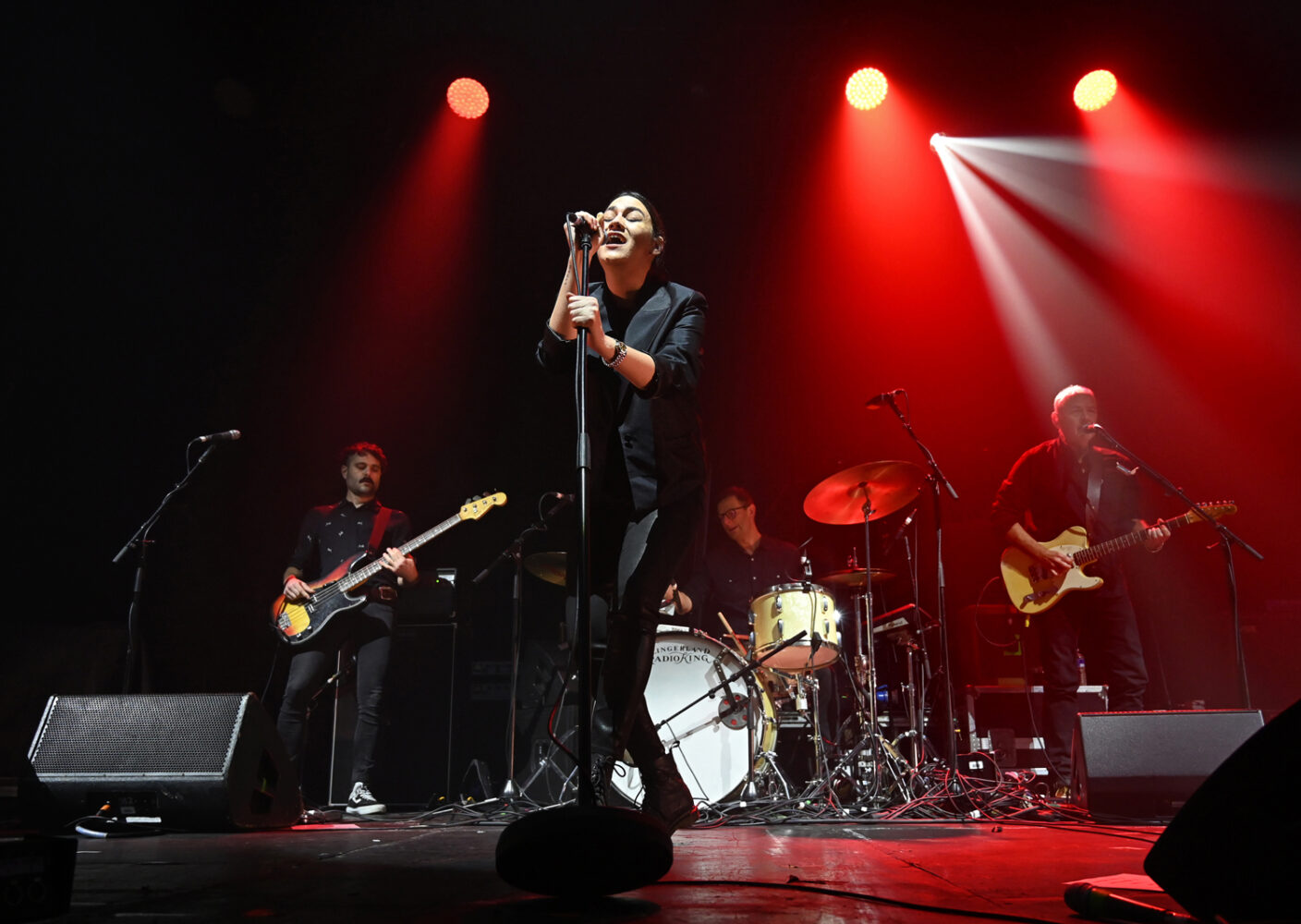 At times there is almost a hint of later-period Radiohead in the use of the atonal and subtly obsessive brass. It takes some time for the crowd to get fully into proceedings – at first there seems a palpable lack of engagement in what is occurring onstage, but by the time a fiercely powerful Prayer Mat and a stomping, clattering Out Of The Way strike home, the claps and the whoops from the crowd indicate that Shah’s evocative, profound and bold message has hit home. She remains a striking hope in the darkness for British music – an artist unafraid of speaking uncomfortable truths and backed up with a melodic and percussive sensibility all of her own.

Suede’s decision to celebrate a quarter-century of 1996’s Coming Up (again, WHAT?) by playing the album in full is a bold one, but one that pays off. Though at the time I was far more of a fan of their debut and Dog Man Star (and still pining for the departed Bernard Butler) time has proved that the album was a glorious step into a more commercial sound without losing any of the glitzy grime and strangeness that made them so captivating in the first place. From start to finish tonight – the band are on scintillating form. 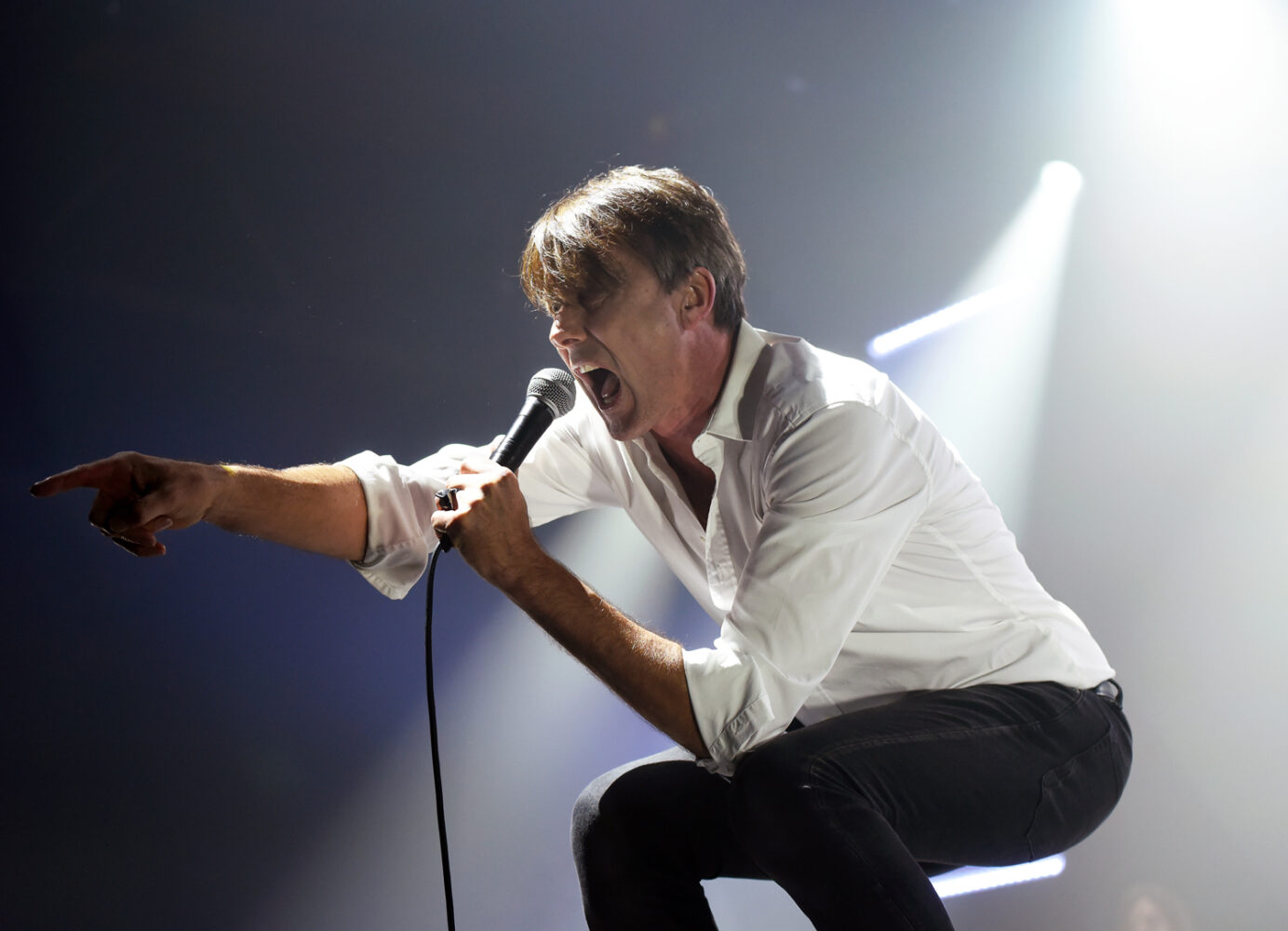 As Trash kicks in, Brett Anderson prowls the stage like a tiger, looking utterly unchanged by age and throwing himself into shapes and onto the floor in a way that is profoundly unacceptable for a man in his mid-50s (I can only assume several portraits are gathering in several attics). As ever, Mat Osman, Simon Gilbert and Neil Codling are terrific and taut, but it is Richard Oakes who properly seems to take pure pleasure from tonight – continually swapping guitars and creating wave after wave of crunching, incessant guitar that permeates each corner of the room. Filmstar oozes sleazy joy, Beautiful Ones still slices through the brain with radiant joy and the likes of She and The Chemistry Between Us carry that wonderful, faded debutante-at-the-seaside swoop that Suede have always managed so beautifully. By the time of the closing Saturday Night I am transported back to the early hours of one of my first house parties back in Newcastle in the mid-’90s; attempting to get it to play with a scratched CD. Time carries so many memories, but when they are sound-tracked so beautifully it is worth immersing yourself in for a period of time.

The second set is an equally wonderful journey through the band’s past and present. The outstanding B-Side Young Men still sounds stunning in construction and delivery, though there is a slight disappointment we don’t get the outstanding Killing Of A Flash Boy as with other dates on the tour. Nonetheless, we do get a superb cover of Nadine Shah’s Fool with Nadine coming on to duet, whilst 2013’s It Starts And Ends With You remains a real touchpoint for the band’s late-period revival. 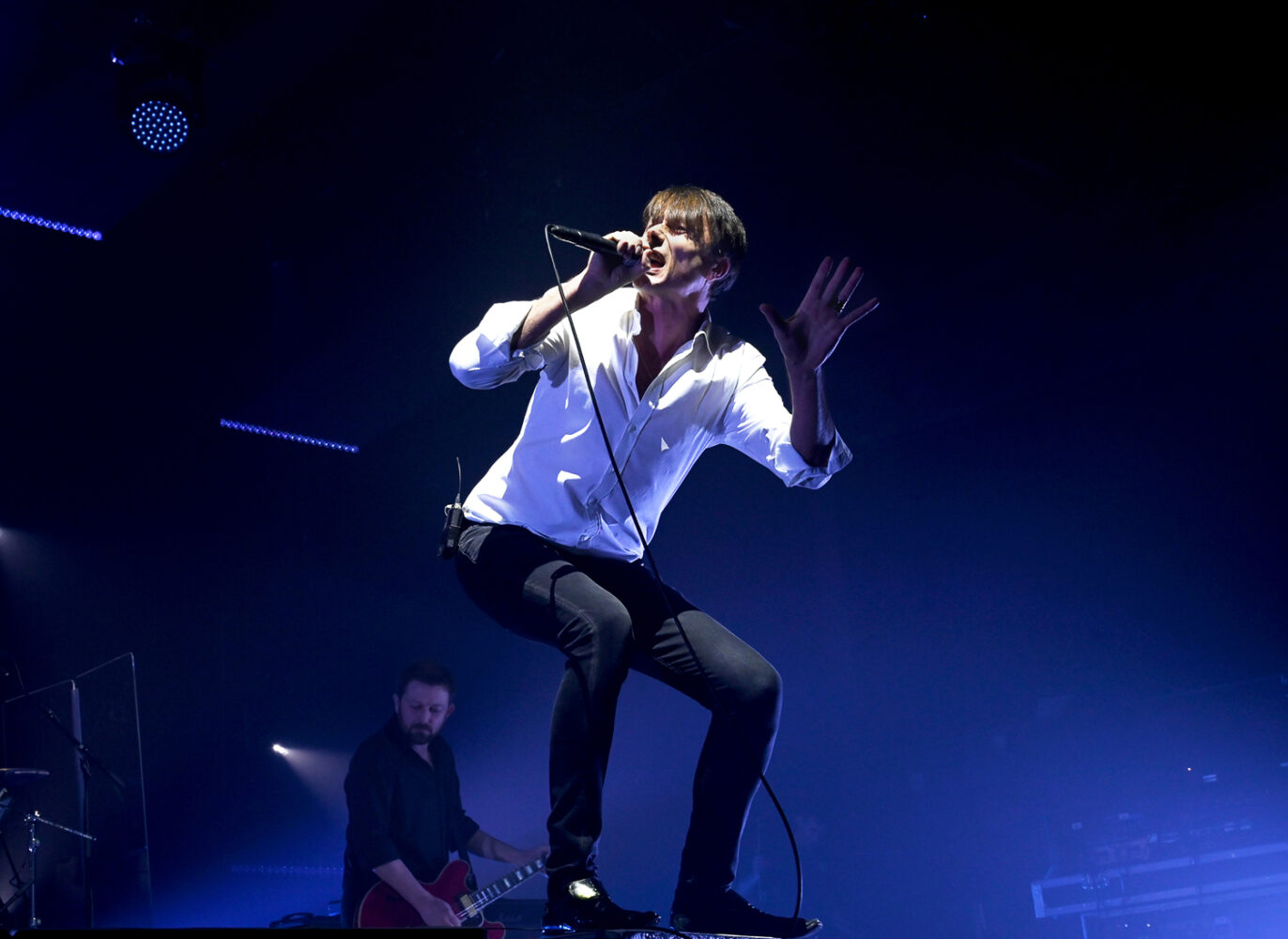 And then we get an astonishing five-song knockout – a storming Can’t Get Enough followed by the apocalyptic, immortal We Are The Pigs – still for my mind the greatest single the band ever produced – but followed in rapid succession by the magnificent debut album trio of So Young, Metal Mickey and Animal Nitrate. Each still sounds completely flawless and bursting at the seams with invention, glamour and melodic joy – a world apart in time but still resonating as loudly, brashly and brilliantly as they did nearly three decades ago.

We get one final treat with the soaring and windswept epic Life Is Golden from The Blue Hour before the band finally depart to a sea of smiles and applause. There are many bands that tread out nostalgia like a tired old suit and remain locked in the past. Suede have somehow managed to maintain their heritage and the impact of their ’90s heyday with a late-career flourish and a live show that appears to grow in energy and impact with every subsequent visit to their glorious world. They make me feel young again, whilst making me appreciate the age I am, and one can only hope they continue for many years to come. From the evidence of tonight, they will be with us for some time yet and we should cherish them.

Pictures by Trev Eales. All copyright to him.See more of Trev’s work here