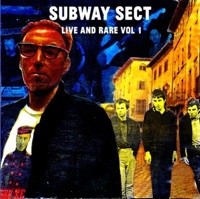 Punk rock means many things to many people, it can be fierce rock n roll, it can be leathers and studs, it cam  be retro record collecting, it can also be Subway Sect, one of the true originals and a band whose deliberately erratic career remains unpredictable and fascinating. Frontman Vic Goddard could be termed eccentric or he could be a wise man surrounded by fools, he follows his own musical path and is stubbornly DIY and true to the original spirit of punk rock
He cuts an engaging onstage figure, looking all at once awkward and in total control, hunched over his mic and holding his guitar like he has never seen one before. This is anti rock n roll at its best, rock n roll stripped of the presence and the pose and played as it is. This is the kind of territory that mavericks like Mark Smith have toyed with but Vic is the original, the innovator who saw the true potential for individuality offered by punk and ran with it.

Watching Vic is like looking right into the heart of punk rock and that collection of mavericks that created a musical movement that remains strong decades later. This is the real deal, the living embodiment of all the contradictions that made punk so fascinating. Vic was there, one of a clutch of teenagers who would cycle to early Sex Pistols gigs transfixed by the youthful  Johny Rotten- a new kind of frontmen.

Vic and his gang understood the non macho posturing of the Sex Pistols frontman and the very English lack of strutting backed up with a sneering sarcasm. Malcolm Maclaren told this clutch of kids they should form a band and they did and they called it Subway Sect because it sounded a bit French film and arty. They dressed down and by accident invented the look and sound of indie rock. It could be argued that the whole style, attitude and high treble guitars of indie music itself started here and the band is held in high esteem by all manner of hip bands.

They appeared and disappeared  at will, deliberately fucking up any chance they had in their careers, Vic remained true to his own spirit and put out brilliant records, dabbling in all styles of music and making their own style.

Tonight they play a clutch of northern soul style songs which are given an individual edge by Vic’s nasally voice and ability to put his stamp onto anything. With Paul Cook on drums the band have an added power and punch with the ex Pistols drummer adding his distinctive style to the proceedings. Cook is a great drummer and there is something heart warming about him playing a bar with his old comrade from the punk rock wars.

They end they set with some old punk rock tunes, Including the rarely played Chain Smoking with Vic dealing the high treble on his guitar in a way that no one else can, he makes it look sloppy but it’s all quite genius- often copied but never equalled Subway Sect are on their own trip, the last of the originals, real punk rock.