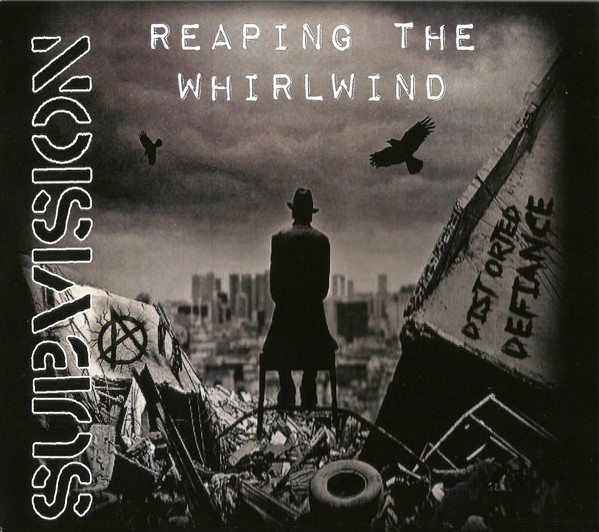 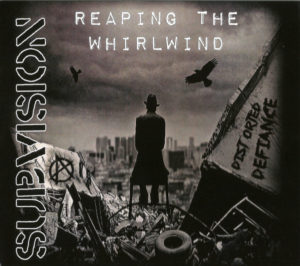 Dark punk with metal undertones paints a grim soundscape with lyrics to match on the latest 4 song offering from Kincardine punk rockers Subvision.

Bleak post apocalyptic cover art shows Westminster in ruins and crows circling. The first thing we hear is a crunch grindy bass line. This band are dark. Very dark. Dark is the word: imagery, lyrics, content, the downtuned music with a doomy metal edge. Even the name Subvision sounds subterranean and other worldly. Vocals are rasping raw and shouty. Not to be confused with the Swedish alternative rock group.

Crows have become a popular motif in the last decade or so on the punk scene. Not surprising given their carrion connotations and connections. It’s almost as if the hope that the dove so often used by 80s punk bands (generally referred to now as anarcho-punk or peace punk in the States) – most notably The Mob – has been dashed and all that is left is a cynical view that we will have to eke out an existence in a wasteland.  Death, decay and crows. Crows abound in Subvision’s artwork and even make their way into the soundscape with a crawing in the middle of “Scarecrow”.

There are some clear metal influences in Subvision’s sound and perhaps a little sprinkling of goth, but these are embellishments and at its core this is mid-paced punk with a few more upbeat moments. There is something of a crushing feel throughout as if they are pounding the walls with lump hammers. If forced to give comparisons I’d be using invoking Dread Messiah and Coitus – names that will mean a lot to the initiated and very little to anyone else.

“Suburbia” lists the negative stereotypes that inhabit the hinterlands of the City. We are not talking the Suburbia of “Reggie Perrin” or “The Good Life”, rather the decay of “Shameless” in which “no one’s giro lasts a week”.

“Scarecrow” regales the feelings of its eponymous straw headed anti-hero but I took this as a metaphor for how people are treated in the modern workplace. You may have met these people who have been suckered into thinking that they are playing an important part in in the corporate machine, not realising they are mere cogs to be yanked out at a moment’s notice.

“Is it OK?” asks that perennial question: are we being true to ourselves or hiding our real thoughts and feelings for the sake of acceptance? The occasional use of a wah wah, flanger or phaser effect on the guitar suits Subvision’s style well. On this track, it’s more Tony Iommi playing Supernaut than Banshees at their more gothic – more like a psycho wasp attack than psychedelia.

“Your Country Doesn’t Need You” starts with a Slayer-esque guitar intro before settling into another punk-metal song which spells out in song the riots and society crumbling depicted on the cover. The title is a great take on the Kitchener poster slogan, 100 years on from when it was used to lure hundreds of thousands to their deaths in the First World War and explodes the farce in one key couplet: “We thought they fought for freedom, dignity and all. Walk the streets of poverty as we prepare for war”. Listen carefully and you can hear something of the Stooges ringing out from the guitar in the verses on this one, even in the live footage below.

You could mistake all this doom and gloom for misanthropy but it is exasperation at what humanity has become and waving a warning – sort it out or it’s Mad Max time. All in all quite an interesting mix of musical styles, personal and political lyrics, but all couched in the terms of black clad crusty punk rockers.

Subvision can be found via a portal to the underworld or on Facebook.