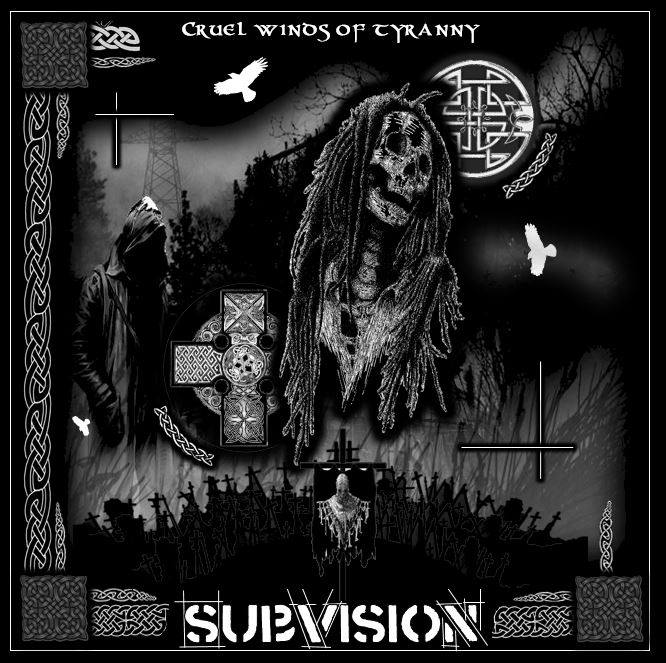 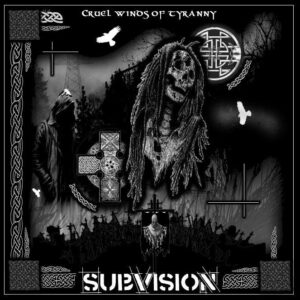 Subvision’s latest mini-album has an extra dose of metal, just how the crusty punk kids like it up in Scotland

When punks do metal, it can go well or go terribly.  To set the scene, English Dogs are an example of that in one band.  Talk to any punk rocker of a certain age and they’ll give you a cut off point after which “they went shit” i.e. the metal to punk ratio had just got too much. What is never under question is that they went too far, unless you are a full blown metal head, of course.

So, to Subvision, a Scots bunch of punks dipping their toe – or rather a whole foot – into the dark pool of metal.  On viewing the black and white cover packed with one eyed skulls, skeletons, knotwork, stone circles and celtic crosses, you kinda know what to expect. What the youth call “crust”. In other words, metal played by punks.  But it is still clearly punk and has not crossed over into the land “where legend began”.

Listening to these 6 tracks the sound and atmosphere of Killing Joke is evident – their heavier stuff specifically – and consequently Amebix who themselves cited Killing Joke as a huge influence.  Close your eyes and Subvision are the sound track to Immortan Joe and his horde as they give chase across the radioactive wastes in Mad Max: Fury Road.  There is a crushing heaviness that puts Subvision in the same bracket as Extinction of Mankind, Police Bastard, Coitus, Wolfbrigade and Hellbastard (who were the first band I remember banging on about “crust”, the most ridiculously named subgenre in punk).  Good bed fellows, although I wouldn’t fancy sleeping on that bed without changing the sheets!  Front man Beve’s vocal is a gruff attack which hints at Jas Coleman, Rob Miller (The Baron from Amebix) or Chronos from Venom with a bit of background throaty melody here and there that reminds me of Lemmy.

By the time we hit the third track Suffer a few speed-metal harmonic licks pop up but it’s still laid over a punk rock core with maybe even a touch of goth on the picked guitar – especially when the phaser kicks in on Any Other Master.  That title could sound a bit worrying, a bit Game Of Thrones or Lord Of The Rings but it’s about something far more malevolent than the worst monster fiction could throw at you – human nature.

Your Country Doesn’t Need You is an epic closer. 4 minutes long.  A chunky riff that repeats over and over again, the guitar ringing out rhthmically chang-chang-chang-chang-chang giving it an I Wanna Be Your Dog  Stooges feel. Add to that some tempo changes and the odd soaring guitar solo and it makes for a catchy song. Although musically it is pretty much a metal fest, the tirade of vocals has its roots in anarcho punk bands such as Icons of Filth with the added abrasiveness of Blitz and the like.  Air raid sirens to fade…. Not a new idea but it still works, so why the hell not?

At 6 tracks this is being sold as an EP, but at 25 minutes it is longer than plenty of “albums” that I own so deserves to be treated as a mini-LP.

If you want your copy, get it via the Subvision Facebook page and you can listen to them on Soundcloud.