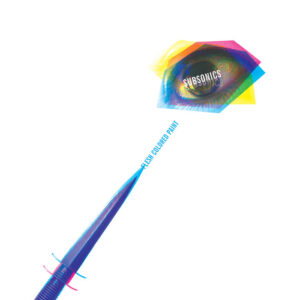 Anyone who has followed the Subsonics career thus far will be in no doubt as to the debt that they owe to a certain New York arthouse band and this album is no different. The songs rock along through jiving dirty rhythms while singer Clay Reed croons away in his affecting drawl, a drunken hybrid of Lou Reed and Marc Bolan. It’s an album that packs in crazy pop hooks over a bare rhythm section that holds it all together in a 50s primitive rock ‘n’ roll style. The songs rarely make it to the two-minute mark, which can leave you wanting after each song, but as soon as the next song kicks in you’re back in the rolling groove and more than satisfied.

The album kicks off with the title track and perhaps one of the most bizarre opening lines of any song ever written. “Where the donkeys wear shoes, oh don’t they look great.” Sure, why not? But the song then goes on to proclaim that where nothing is real, nothing is fake. It’s these almost literary twists that endear them to many fans. The first half of the album flies by in sinewy guitar licks that ooze in street gutter menace. Lead single You Got Eyes is drenched in a Velevet Undergound style and perfectly encapsulates what the band have aimed for throughout their records. When they drop in a brief solo, such as on the wonderful Baby And Chita and the pounding Why Should Anybody Care At All, it sounds almost like Link Wray has picked up a battered guitar from a whisky-soaked floor and spat out a dose of magic.

Die A Little slows the tempo down mid-album in a surreally blissful ode to dissipation, a licentious abandon of love and life. “Let’s go upstairs and die in bed, die just a little bit more.” It’s the clearest example of the twisted romanticism that fills much of the Subsonics’ work. When they rock things up more, such as on Most Popular Boy In Town, they fly closer to the sound and style of Richard Hell, but dealing with the sound of stripped-back three-piece means that there’s still a rawer sense of underlying energy.

I Believe I Don’t Believe and Cold Cold Winter once again take their foot off the accelerator, letting the songs coast along, and are the closest they get on the album to The Velvet Underground, who are clearly their spiritual guides. It’s homage rather than hero worship though as the band retain their own singular and individual style at the same time. Closer Permanent Gnaw drives more than any of the other songs on the record. The drums pound away under screeching guitars that come close to an aural assault before it bows out in a crash of distortion.

Once again the Subsonics have created a record that fits perfectly into their mould of devil-may-care street rockers. It’s direct and to the point, chock full of great stripped back guitar work that is allowed to shine over simple rhythms. They’ve been in the game for sixteen years now and know exactly what they want to do. The production perfectly harnesses their raw live power, sanding it down, but leaving the bare-bone sound that grabs you right from the off. The brevity of the songs at times leaves you wishing they’d gone for another verse and chorus, a chance to really grapple with the songs and let them sink their hooks into you, but at the end of the day they say what they want to say and do it the way they want. Simple, straight and to the point. How else should rock ‘n’ roll be?

Watch the video for You Got Eyes below: