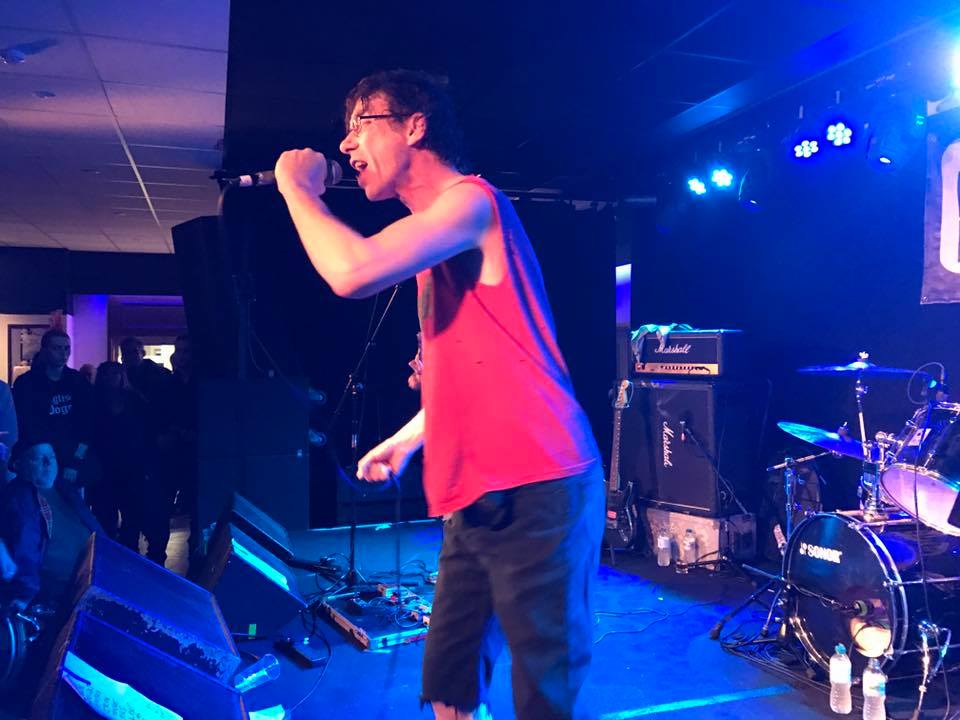 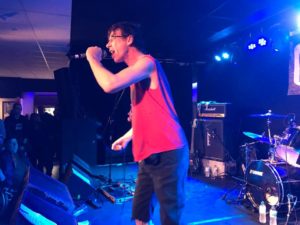 Riotous assembly at the Heads reviewed by Ged Babey

You won’t get a sensible review out of me today…. This was just  a bloody brilliant gig.

Maybe its just me but ‘we’ take Subhumans for granted.  They always give 100%. They have been great forever. Dick Lucas is the Dorian Gray of Anarcho-Punk. He just doesn’t seem to age at all. They are one of the UK’s most ‘mighty’ punk bands.  They are everything a great band should be.

Fresh, fast, funny, full of character. Songs that have a point and take a stand, but have wit and style. Subhumans were every bit as good as Dead Kennedys or Black Flag- you know, bands who have become ‘iconic’ or ‘legendary’and been much written about and lionized.  Subhumans should get one of those Lifetime Achievement/ Hall of Fame Awards that they give out at back-slapping ceremonies – only of course that’s completely & utterly not what they are about, not the way they operate.  They are outside of the business.  They don’t do this for fame.    Why do they do it?  Well I imagine that it’s to do with having fun, bringing like-minded people together and making a living the only way they can. And the old-fashioned belief that music can affect change, even if is only changing a few peoples minds about a few things. 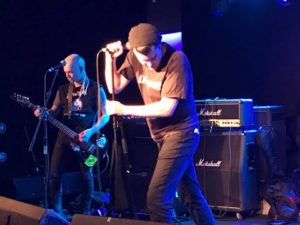 The supports included a brand new Southampton d-beat band called Kontakta who were great once they stopped arsing about, insulting each other and heckling their mates from the stage.  Music-wise they are mega-fast and fresh sounding and their songs never seem to go past the 2 minute mark. It’s Scandi-style dis-core (I’m told) with anti-hunt, anti-cunt, anti-cap, anti-this, uncle-that lyrics barked out.  Made up of activists and local rapscallions they look set to give local elders Armoured Flu Unit a bit of comradely competition.

The Reaktors, filling in or Murderers Row – who’s singer Rachel gave birth earlier than planned (congrats!) – were perhaps slightly out of place, being a bit more ‘old-school’ than ‘anarcho’.  The main way this manifested itself was in the speed of the songs. A few grumbles about the ‘plodding’ pace aside, Reaktors actually sounded tighter and harder than they ever have. Rolys guitar heroics are a wall of sound but their anthemic songs do seem to go on a bit too long. I blame Neil Young. ‘Lets Get the Tories Out’ was fine singalong though and they did win a few new fans.

It was without doubt Subhumans night though. Totally on form, live, they rage on… and pull a full-house at the Talking Heads.  Plenty of ‘Day the Country Died’-era favourites and a fair few from the under-rated Internal Riot from 8 years back; This is Not An Advert and This Years War stick in my mind.  Encores included the classic ‘Peroxide’, which reminds me, yes, I must get my hair done.

The vein in Dick Lucas neck bulges to bursting point and he sweats like a water-feature, an over-50 all-action hero and still the best punk singer who can’t really sing at all.  But a more dedicated and inspirational bloke you won’t find. Still fighting the punk rock wars, which we know, will never be over. He couldn’t do it without Trotsky, Bruce and Phil needless to say and they are a superhuman punk rock machine.

This was just a great, packed night at the Heads after some pretty poorly attended shows and a special mention for the soundman, Martin who got the best front-of-house sound I’ve heard anywhere. Loud and every instrument crystal clear. Good job that man. The first gig of the year for me was a great night.

Not a review full of searing insight and profundity -but sometimes all that’s needed is a shot of verbal adrenalin and positivity, driven by seeing an inspirational underground band in a roomful of like-minded people.