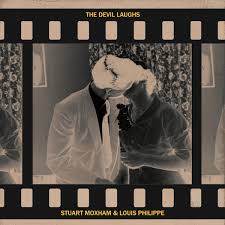 Two noted songsmiths and friends team up for an album of mellow moods and bucolic beauty, a mighty long way from rock & roll….LTW’s Ian Canty pulls up a deckchair and reclines in the garden of delights….

A fair time ago I saw a gig at the Bush Hall in London that had Stuart Moxham (YMG, The Gist) and Louis Philippe (lots of great records for él Records since the 1980s) playing sets on the same bill. If that was not stacked with enough songwriting talent for you, also featured were Bertrand Burgalat and Sean O’Hagan of Microdisney/High Llamas fame. A great night and when the pair of Moxham and Philippe team up again on The Devil Laughs, one can feel the bonhomie and sheer warmth between the two friends come alive on this record. This album came about when Stuart took some of his songs to Phillipe, who is also a noted footballer scribe when writing under his real name of Philippe Auclair, to help with the arrangement and development of these ideas.

The two had previously got together on record in 2007 for The Huddle House LP. They dovetailed so well on that recording, so teaming up again it was only natural that a LP would result with their efforts. Ken Brake, who produced the previous collaboration, also returns here to shape the sound with admirable skill and Danny Manners was called in towards the end to put down his double bass parts, adding another crucial element in the sound of The Devil Laughs.

It must be stated upfront that what with have here is something that has little connection with anything remotely rock & roll. Not everything has to and this certainly doesn’t. What it actually is, well that’s difficult to categorise, so perhaps we will try not to get too bogged down in that (though it’s inevitable). Influences drift in and out and the duo are just a great fit, their different backgrounds meaning they bring a myriad of sounds like chanson, folk rock, jazz pop and even choral MOR with them, but nothing becomes too dominating a theme. The pair stamp their individuality on The Devil Laughs with a typically quiet authority and keep everything so fresh too.

Opening track Tide Away takes us into the LP in a breezy and busy fashion, with the kind of hook that quickly lodged itself in my heart. That it is brilliantly arranged shouldn’t really come as a shock, given Moxham and Philippe’s track records, but this is just beautiful, in a fair and proper world it would be number one until Christmas. Following on, Day Must Come has a touch of that simple but alluring Gist organ sound, but this one has a slight r&b/soul structure that develops into a marvel of easy-going pop music with a little of Walk On By as a ghost in the background. Just listen to the backing vocals soar on here!

Heralded by a longish intro, It Goes Like This isn’t much more than a chant of the title on paper. The duo vocally take turns alongside a simple acoustic guitar riff and strings and from such a basic foundation, something truly moving emerges. Next comes Love Hangover (not the Diana Ross song), which has a little of that Gist in the organ again, with guitar and shuffle percussion playing a part too. This song is a tad more upbeat and with a sweeping feel and deep baritone, it works well.

The title track starts in austere style with just handclaps and acoustic, but soon massed voices and strings come in to broaden the picture. The jazz-guitar inflections make Stuart and Louis here sound a little like an early, all-male Everything But The Girl at their most charming and carefree. The backing vocals throughout are primed to perfection – the press release mentions the Beach Boys and the Swingle Singers, but for me they’re more reflective of someone like Design or those other vocal groups that kitted out soundtracks and tv shows in the early 70s. With Sky Over Water the duo sing in unison while a guitar solos appealingly, with the keyboards doing a lot of work and a rumba beat the backbone. Then it hits you in the second verse when it goes down unusually to just vocals and bass as the song reveals sadly that “years have gone by without trace” – it’s a real heart stopping moment, all the more effective because it is so unexpected.

Fighting To Lose follows and is relatively sparse, but beautiful. Some neat acoustic picking is a highlight. Again going back to the press release, it points to Simon & Garfunkel, but for me I think more pertinently a European Everly Brothers playing subtle folk rock could be just as good a reference. Their voice just gel so well. Jazz organ frills, strummed strings and wordless backing vocals introduce the swinging rhythm of Untitled #2. There’s a slight but growing tension nestled within the lush backing, a relatively quick pace pushing things along and a cool, full vocal. The double bass work here is excellent and really helps to set the sound apart.

An acapella beginning to Come To Me Nancy is just so well done, no histrionics just passion. A neat guitar line enhances some organ chimes, a subtle pastoral atmosphere is expertly evoked. Then it nearly stops dead. Another moment when the tension that has been quietly set in motion caught this listener on the hop, before the music kicks in again. Head In A Song is a bit different, with a lazy drift into a prime flute-led folk pop sound. The dual vocals again work so well, underscoring each other. “You were right there with a casual air” – painting a vivid picture in just a few words.

The wonder and resignation in Stuart’s voice and the patient pace of the guitar figure in Singing Out is something to behold. A lovely piece of sunny pop music. The Devil Laughs ends as it began, with a brief and triumphant (in the Moxham/Philippe typically modest way) reprise/lap of honour of the opening number Tidy Away.

Then it’s gone, leaving a hushed silence after keeping this listener absolutely rapt for the entire running time. Stuart Moxham and Louis Philippe have crafted something of rare quality here, a shimmering, shining beauty of the first order that defies easy description, something that is complex, but also full of simple joy. I doubt if 2020 will yield anything more golden than the 35 minutes of top rate tender pop music that is The Devil Laughs.