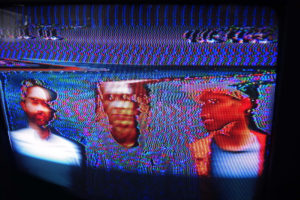 Ahead of the release of their debut album ‘Brokespeak’on Blood and Biscuits Records, Strobes release OK Please as a taster. Formed of keyboardist Dan Nicholls (who has worked with Squarepusher and Matthew Herbert), drummer Joshua Blackmore (Troyka) and guitar and synth Matt Calvert (Three Trapped Tigers, Heritage Orchestra), Strobes have a formidable sonic pedigree that certainly plays out on this first release OK Please from ‘Brokespeak’.

Starting off with a very insistent drum beat with a jazz funk beat over the top, this band really know how to grab you by the dancing shoes and spin you around the dance floor! This beat eventually breaks down into a rhythmic, almost underwater bleep, replete with more funk guitar freakouts that just bolster the track and take it into really interesting directions and territories.

This ‘jam’ just gets more and more funky and chaotic as the band introduce some noisy glitch and drum overlays to the proceedings.

At 4.54, it’s not a particularly long track, yet it seems to cram in lots of influences and takes you to places that you weren’t expecting. The music often doesn’t make sense, but that is what i love about this track. It doesn’t conform, but that is fine with me. I like music to have a complete disregard for structures, tone, tempo and style. Strobes seem to have all this and more. Looking forward to hearing the full album!