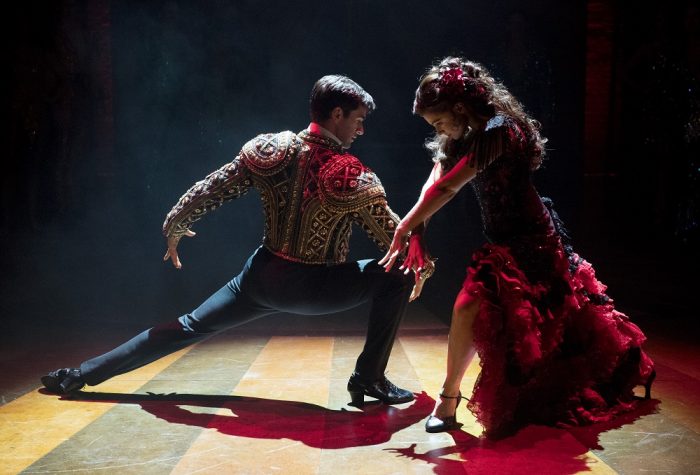 Paul Clarke says that underneath all the sequins and fake tan a new stage production of Strictly Ballroom is actually pretty ballsy.

The flamboyant world of ballroom dancing might seem the very last place you’d find any punk rock attitude but this glitzy stage version of the cult Baz Luhrmann movie Strictly Ballroom is all about sticking it to the man.

Once upon a time the hip Aussie director was a ballroom champion down under so the pressure is on the team behind the Christmas show at West Yorkshire Playhouse as Lurhmann is a notorious perfectionist. Nothing less than perfect would do, so it was no wonder they brought in promising young gun Drew McOnie to direct and devise some new choreography.

That was money well spent as McOnie makes the most of the slight story of tortured dancer Scott Hastings (Sam Lips) who wants to break out of the stifling straightjacket of the strict rules of ballroom. Along the way his commitment to being himself means he alienates everyone he knows until he teams up with ‘ugly duckling’ cleaner Fran (Gemma Sutton) to try and become Pan-Pacific ballroom champion on their own terms.

Well, you can guess the rest of the Oliver winner Terry Johnson’s adaption which strings together the clichés efficiently, but focusing on the bit too earnest ‘be yourself’ message.

Lots of people will be coming to this show expecting Strictly Come Dancing on stage, but they will disappointed as the big difference here is every dancer is a highly trained professional nailing every step of McOnie’s Imaginative melding of ballroom styles from rumba to the Paso Doble with more traditional musical theatre moves.

There is touch of the jukebox musical as Lips and Sutton belt out the evergreen Time After Time but Aussie superstar songwriter Sia co-wrote the moving Love Is A Leap Of Faith just for this show .

American Lips is a better singer and dancer than an actor and some of his solo dances are magical. Sutton’s Fran is only an ugly duckling until she take she glasses off whereupon lo and behold the Cinderella motif is complete. It takes some talent for a trained performer to dance so badly before Sutton creates some dance Viagra with Lips, and her solo on Fran’s Epihany suggests a lead role in the West End is not far away.

For theatres like the Playhouse these lucrative Christmas shows really need to put bums on seats so the cast is packed full of seasoned pros like Tamsin Carroll and the outstanding Stephen Marshall, who both bring wit and depth to Scott’s long suffering parents who have very different hopes for their wayward son. Julius D’Silva has great fun with the dastardly Barry Fife who wants to enforce the ballroom rules strictly no matter what the cost, and he gamely sport the worst syrup ever seen on a British stage.

But the real heart of the show is the moment as the first act closes when Scott meets Fran’s Spanish immigrant family who show him how to dance the Paso Doble from the heart not his ego. It is a raw lesson delivered by the show stealing Fernando Mira who confronts the cocksure dancer with a fiery Paso rooted in his class, culture and – most importantly – love for his daughter Fran who is still mourning her dead mother. Moving, powerful and utterly masculine as the emsemble belt out the show-stopping Magnifico around them.

The other stars are the frocks, and it is no wonder that costume designer Catherine Martin has won four Oscars for the work on Lurhmann’s films, as her sparkly sequined creations light up every dance sequence and are worth the ticket price on their own.

The Playhouse is right to eschew traditional Xmas shows and in Strictly Ballroom they have created a hugely entertaining – if a bit obvious – fairy tale that does have some unexpected balls behind the sequins and baked on tans. They’re off to Canada after this, but with a few tweaks the West End could beckon especially if they can keep hold of this cast, and Lurhmann gives his seal of approval.