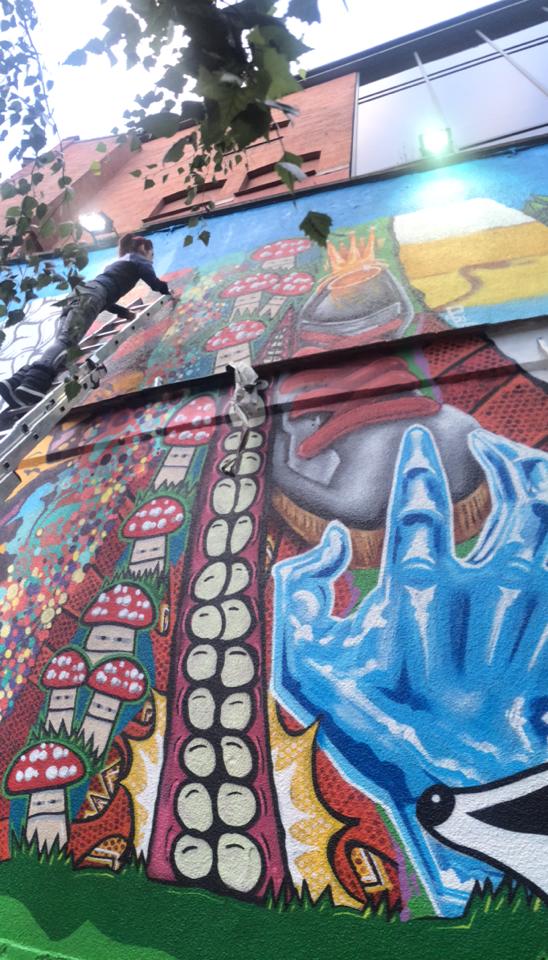 Whilst talking about their latest creation, the multi-sensory delight which is “Street Sessions,” one half of creative music and film duo ColouredSouls Scarlett Fern Hardy talks animatedly about the perceptions people still carry concerning street art. “People think all graffiti is illegal,” she points out, and by and large she’s right; the Banksy’s of this world may have done a lot for the image of street art, but its all too easy to walk past even the most impressive of pieces and presume its not legal. Any idea why should this be? As much as I love a good walk round a well curated gallery as much as the next person, it seems horribly elitist to think that that should be the primary way to view art; why shouldn’t it be almost compulsively viewed, with the world as a canvas, by all those who happen to be walking particular paths? After all, street art is the Situationist manifesto – or many the intentions of just about every other major art manifesto – writ large. The avant-garde was always about art as sublimation and thus street art should be the ultimate fulfilment of this.

Street Sessions is a twenty minute film which neatly compresses in two years worth of footage in a manner which feels completely natural, Scarlett’s editing skills being some of the very finest I’ve come across, showing the creation of various pieces of wonderful Nottingham street art created by a range of talented artists. The second half of the film is a condensed whole year’s worth of footage focusing solely on the huge, team-built creation that is to be outside wall of the Broadway cinema, a bright post-modern masterpiece that is so familiar now to many Notts residents that perhaps it has become just a little too easy to take it for granted. Once you’ve watched this film, you certainly won’t have that option. Sometimes seeing the creation of things can ruin the magic; in this case, it enhances it and lends a whole new appreciation. The instrumental soundtrack created by the other half of ColouredSouls, Scarlett’s innovative younger brother Tommy Leeson Hardy, is atmospheric, well-produced and fits so well with the footage that if would be easy to presume it was written especially to match the film. (It wasn’t, the components to ColouredSouls usually being separate creations, a testament to how their working relationship is organic to the point of telepathic.)

Having carved out an impressive niche in street-art themed film (previous films have made for successful online shorts) , Scarlett tells me she intends for future films to be on the same theme, but moving outside of Nottingham. In the meantime, the Long Eaton-born, Hyson Green based collective allow their work to ooze Nottingham – Street Sessions features long gazes travelling up Nottingham’s centre of cool, Broad Street, and continued glimpses of the Broadway Cinema’s 25th anniversary celebration sign, and various Notts characters such as Montana Shop’s resident street art guru Dilk, the gifted Tokyo 709 whose drawings are just as powerful in frames or street walls, and DJ Sonia Hawkes in her guise as Stiff Kittens, all in their element doing what they do best. The vibe is captured, without it feeling like some sort of Nottingham tourist board project – the focus is squarely on the magic of street art’s gestation, and the way the soundtrack moves along with it.

Walking out of Rough Trade, one of the first things you see is the Broadway cinema and that wall which dominates the film so much. Everyone at this screening is familiar with that wall …but, thanks to the skill of ColouredSkills in reinforcing the talents of its creators, its fair to say that everyone is looking at it with more appreciation than ever.