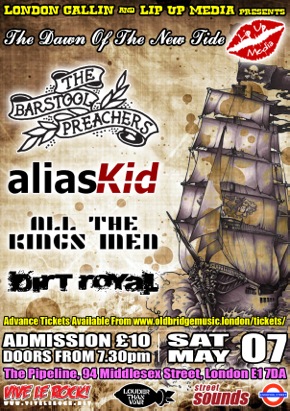 Like the 100 club punk festival in London in the autumn of 1976 this could a gathering of clans.

FOUR bands heralded as “the new tide” of street-rock will perform together for the first time on 7th May.

The Bar Stool Preachers, Alias Kid and All The King’s Men co-headline London’s Pipeline club in a gig supported by Louder Than War, Vive Le Rock and Street Sounds.

Proving that music does exist outside X Factor an the middle class elite, the groups have been praised as a fresh generation rising up to challenge bland, manufactured, corporate Simon Cowell approved pop.

Brighton band the Bar Stool Preachers released their debut album last month and have been wowing audiences all over Europe with their charismatic performances. Described by Vive Le Rock as having “All the energy of the Specials in their heyday”

Moston-based All The King’s Men are making waves with their heartfelt hard pop sound and are already headlining local festivals. Louder Than War say “All The Kings are a truly exciting prospect”

Brighton’s highly-rated Dirt Royal will kick off the night and have won critical praise for their high-energy Clash-influenced garage pop sound. Acid Jazz guru Eddie Pillar says the band has “a raw live energy that many young band’s lack”. Street Sounds likened them to “the Libertines jamming with the Chords”.

Promoters Emma Rule and Barnet Mark say  “We need new energy and these bands supply it – that’s why the real music press are behind them.”