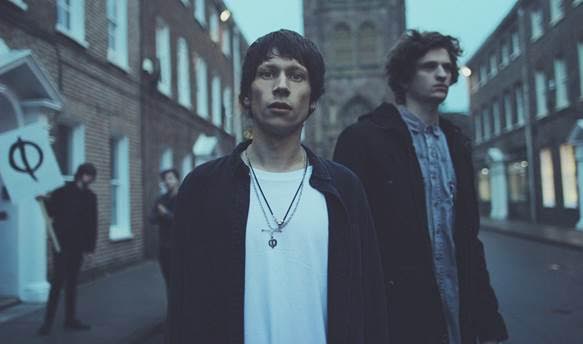 Currently selling out the UK’s small venues on their headline tour, rising four-piece October Drift have revealed the music video to match their forthcoming single, ‘Robots’, due for self-release on 7” vinyl on November 13th.

Despite having repeatedly sold out both their debut headline tour earlier this year, and a live stint through May, wowing audiences at packed-out Tramlines and Dot2Dot festival appearances, and with two explosive singles ‘You Are, You Are’ and ‘Whoever’ under their belts, October Drift assert themselves as an enigma in 2015. Continuing to shun social media, appearing clandestine behind ambiguous placards with mysterious balaclava-clad characters appearing through the cities they play, the band continue to communicate with their fans purely one-on-one.

As ‘Robots’ powerful sonic grip takes hold and walls close in fast the band explain how, working with Bristol’s Hankin Films (Spectres, Trust Fund, Micachu & The Shapes), “we wanted to emphasise the tension and urgency of the song and create a feeling that something is completely trapping you whilst you helplessly watch life pass you by, it’s a reflection on pleasure, routine, nostalgia, addiction and the bittersweet bubble these things create”.

You can stream the video for Robots in full here:

More from October Drift can be found on their personal website. Or by checking them out live at one of the following November dates: