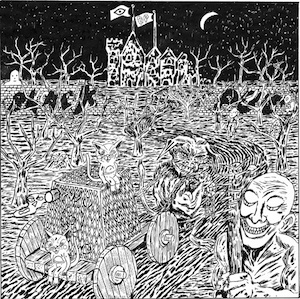 A couple of weeks ago we passed on news about a terrifying release in Thrill Jockey’s “record producing” pipeline, a split featuring tracks which offer glimpses into the two tortured worlds of Black Pus and Oozing Wound. Well, now we have the first taster off said split, a track by Brian “Black Pus” Chippendale (whose artwork you can see to the right incidentally) which you can stream and / or download below.

Listen to the new Black Pus track ‘Blood Will Run’ which opens  the split release. Featuring his trademark hypnotic drum pounding and ratty synthesizers…. and unusually for a Chippendale related track, undistorted and clear vocals. The track deals with the senseless shooting of Jordan Davis by Michael Dunn after a disagreement over music coming from an SUV that Davis was a passenger in.

For more details about the split release vist this post on Louder Than War or Thrill Jockey’s website.

The track, Blood Will Run:

You can read the Black Pus’ blog here and listen to more by him on Bandcamp here. You can also find him on Facebook here and he tweets as @AhaFan88.