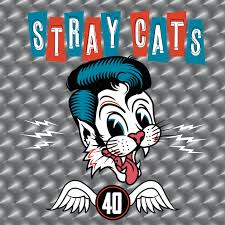 Summer 2019 is beginning to hot up rockabilly-style as Stray Cats make a welcome return in original line up, with brand new music on album 40 released just yesterday, and a world tour listed for June through to August..

Just a couple of bars into album opener Cat Fight and you’re transported straight back into rockabilly perfection that defines Stray Cats – it’s like putting on a favourite old jumper – which you can’t help but dance around in. The whole album has the same familiar energy that dominated the brilliant Runaway Boys, Rock This Town and Stray Cat Strut: the same energy that blasted into the charts on both sides of the Atlantic in 1980 – adding 50s rock n roll to the melting pot of musical genres that defined the 80s, sitting somewhere between mod and punk but chucking in the brighter sounds of Bill Haley, Chuck Berry and Buddy Holly. If you liked The Stray Cats, you were probably also into the psychobilly likes of Guana Batz and The Cramps. (And if you were a teenage girl diverted for a short time from complete gothness, looking back it probably would have been better to take inspiration from the Sexy + 17 little rock n roll queen aspect, rather than try to copy the band’s quiffs and brothel creepers. Hindsight is a wonderful thing though..)

It’s been 26 long years since this trio of founding members Brian Setzer, Slim Jim Phantom and Lee Rocker last released material together – ridiculous given Setzer sounds almost exactly the same – this album celebrates 40 years of the Stray Cats and comes ahead of a world tour throughout June, July and August. The atmosphere, as with much of their music, is clean, simple and fun – no particularly deep themes or messages (“When nothing’s going right, go left..”), it’s an old fashioned world of boogie-woogie, drive-ins, Teddy boys, cadillacs and hair grease. A visit to a hospital in the immensely catchy Rock It Off features flirting with a sexy nurse and medical advice “The flu don’t stand a chance when you get up and dance, rock it off brother rock it off”. By the time you get to third song I’ve Got Love If You Want It, showcasing Rocker’s bass at its very best, the album has embedded itself in your heart as your newest favourite thing. A welcome blast of sunshine in puzzling and anxious times.

Check Out The First Song Cat Fight (Over A Dog Like Me) Here:

Impossible to pick a favourite track – currently it’s either Rock It Off or the irresistible Cry Danger, which anyone would be challenged not to have to dance to. Last week it was the baddest toughest intensely rocky I Attract Trouble, or equally alluring That’s Messed Up, with Slim Jim’s skiffly drums and a superb guitar solo from Setzer.

What a comeback album. This Mean Pickin’ Mama is busy digging out her brothel creepers – alright then, fishnet stockings – in readiness for a summer blast of rockabilly happy. Suggest you do the same… 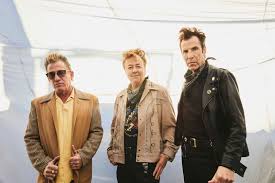 Some quotes from the band:

Brian Setzer: “You have to understand how unique The Stray Cats are. It’s me playing an old hollow body guitar, Slim Jim playing two or three drums, and Lee Rocker slapping a stand-up acoustic bass. I get to write new songs and then play them with my buddies. Somehow we created a new and exciting sound with this simple idea. And you know what? A lot of people agree!”

Lee Rocker: “This new album really feels like the first record we did, it’s really natural and comfortable. For the recording, we went live – like doing a gig, we recorded in a real, organic way. We were all in one room standing next to each other recording live, with the amps turned up to 10, it captured the undefinable things that happen when a band is great, it captured the magic that takes place and an undefined spark.”

Slim Jim Phantom: “We’re very, very focused when we get into the studio, it didn’t feel like a long time had passed since we had done this, it felt very natural and familiar. We were all in a row with everyone watching each other, so it felt like a gig in the set-up. We really embraced that a little bit for the album, it’s like an old way of making records. The modern is meeting the vintage, which has always been our inspiration.”

Catch Up With The Band In Studio Here: