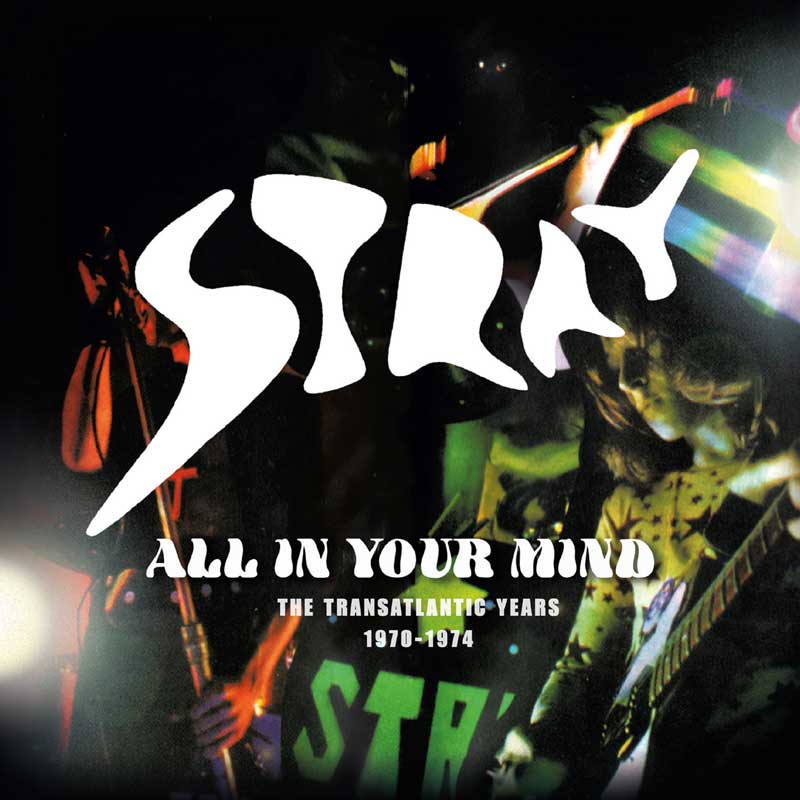 All In Your Mind

Boxset covering the Acton Rockers’ four years with Transatlantic Records, featuring the five albums they recorded for the label in full plus a bonus disc of demos and rarities…..Ian Canty feels the full force of Stray’s monumental Psych-Rock crunch…..

Since forming way back in 1966 as a bunch of teenage Mods, Stray have pretty much been a constant presence in the UK live music scene, spearheaded by irrepressible showman and guitarist Del Bromham. By 1970, with only a change of drummer, they had carved out for themselves a burgeoning reputation as a hot live act and each of the four members possessed considerable prowess in their chosen field. Drummer Ritchie Cole hammered his kit like his idol Keith Moon, Gary Giles pitched in with some Funky bass runs and singer Steve Gadd was a frontman of no mean ability. As for Bromham, there wasn’t much he couldn’t do with a guitar.

Despite all this potential Stray seem to have been saddled with a very much “second division” reputation, which, listening to this new box, is puzzling. Commencing their self-titled first album with All Around Your Mind is a hell of a statement of intent: though all of 9 1/2 minutes duration it shines with brilliance and doesn’t seem a bit too long. It’s a raging Hard Psych Rocking and Rolling monster, a stone cold classic. Bit like a less spacey Hawkwind without that wailing synth, but Stray rocked just as hard.

Though the opening track is a highpoint that any band would struggle to match, the whole of this debut album is a breeze, stocked full with infectious tunes, admirable musicianship and above all a total commitment to high energy, unpretentious Rock ‘n’ Roll. There’s great little Jazzy and fuzz touches to the guitar on Taking All The Good Things and Time Machine runs All In Your Mind a close second, great Psych Pop with a bang on power-packed attack. Only What You Can Make It’s bracing swagger is a joy to behold Rock and Around The World In 80 Days has a stylish and dreamy section welded to their sonic attack. They don’t forget to furnish it with a fine melody either.

The follow up Suicide emerged in 1971, with Stray not really batting an eyelid at “difficult second album syndrome”. Though largely following the template of their first record there were refinements to show they weren’t merely a one trick pony. Dearest Eloise seems to have a bit of the unearthliness of Space Oddity about it and Son Of The Father (nothing to do with Chicory Tip!) is one streamlined piece of Folky Rock ‘N’ Roll, damn catchy too. Run Mister Run is very like what the Who were having big success in America with at the time, but the cocksure groove of the title track is probably tops the bill, a nice bit of the Stooges in that guitar sound and a Funk twist in there as well. Overall an accomplished effort that built on the firm foundations of their debut.

LP three Saturday Morning Pictures arrived in the same year and if it did show a little of a lessening of intensity, there was still much of interest as Stray sought to broadened out their approach. Keyboards and some soulful backing vocals are featured prominently for the first time, taking the focus away from the bass/guitar/drums set up a little. Sister Mary even reminds me a little of Shot By Both Sides for some reason! Our Song, the single, has a free-wheeling Blues/Soul groove not unlike the Rolling Stones efforts of the time. Really nice and with a bit of luck may have led Stray into the charts, but alas it was not to be.

How Could I Forget You shows that Nirvana or the Pixies didn’t invent Quiet/Loud, fuzzed up guitar contrasting nicely with the slower and serene sections. Leave It Out again takes on the Folk Rock approach (though the guitar has a little Funkiness about it), somewhat akin to the Faces efforts in the same direction, but even with a fiddle it has the trademark Stray punch. Though Saturday Morning Pictures seems to mark Stray slightly moving away from the diamond-hard and fast Rock that brought them to the dance, they still displayed plenty of power and on the likes of Mr Hobo, catchy songs that could have put them in the charts.

Slowing down their enviable work-rate a touch, it was two years before the next Stray LP arrived. Mudanzas seems at the time to have satisfied no-one, with the press (who had never been that kind to the band) and fans not liking the direction which was hinted at by SMP. That is with keyboards and backing singers becoming part of the band’s musical palette to a much greater extent. It was unfair on the band really as they did need to move on from their initial sound four albums in and this record contained some not a bad stabs at a few different styles.

Oil Fumes And Sea Air is a nice go at the Faces style again which works well and Hallelujah’s boogie rock seeks to beat the Quo at their own game. Changes warm acoustic rush is lovely to behold and the upbeat Leave It To Us bounces along nicely. I Believe It with its strings even brings to mind the Creation circa Life Is Just Beginning, hardly a trendy sound in 1973, but great to listen to now. Pretty Things is a real dancefloor killer, a Prog/Soul stomper with a nice big chorus too.

Something that is worth remembering is these first four albums were entirely self-penned by the band – it may have been as easy route to do a cover to get attention, but they managed to fight the urge until 1974 and the final album featured here, Move It. Yes its named after the Cliff and the Shadows song and Stray give the song a decent Hard Rock makeover. Though decamping to the US to record Move It, the LP itself isn’t their strongest. The need to show their versatility fought against doing what they excelled in, sometimes to the detriment of the listening experience offered. One cannot criticise them too much for trying something different though and the scattershot approach did bear some fruit.

Mystic Lady unexpectedly comes on like the Searchers/Byrds, sounding like the Folk Rock of a decade early. It’s very well done and novel though. Drugs song Custom Man adds a little humour into the mix, but the strings added to Right From The Start seem unnecessary, impeding the band’s natural might. The LP ends with the touching social comment of Our Plea – if nothing else it showed that Stray were good guys and at least noticed the frustration and desperation of the mid-70s (unlike most Rock bands of the time).

One of the big plusses for ardent Stray buffs will be the bonus disc here and in particular a 1968 demo done for Pye Records. Listening to the youthful exuberance that still fizzes off the four tracks presented here, one wonders why Pye never followed up on their initial interest. Racing drums set the pace on Change Your Mind, a supercharged and freewheeling underground rocker and In The Night has the Pop suss of the Move. Outside with its loner motif and Garagey toughness is another highpoint, recalling their contemporaries Jesse Hector’s Crushed Butler. You also get the abridged single cuts of All In Your Mind, Our Song and Move It with their b-sides (Mama’s Coming Home, Our Song’s flip, excels with a Mod/R&B style and choppy guitar work). You also get the band’s two songs from compilation album Tracks and short Blues jam Encore, which was recorded at the time of the Suicide album.

Stray, as represented on All Around Your Mind, were a talented and inventive band who despite their best efforts somehow slipped under the radar. Live they must have given many a band palpitations when having to follow them and even today the Bromham-led band can still hit the heights in a live setting (I also hear from a reliable source the recent LPs have been good too). Their very lack of pretention must have worked against them for some weird reason.

If I was being picky it would have been nice to have had all the LPs in their entirety on the same disc rather than both Suicide and Mudanzas for reasons of time constraints being split over a couple of discs. I realise that you can only have 80 minutes on a CD, but it would be nice to hear all albums without having to change discs midway through. Still I suppose you had to turn over an LP when these records were originally released. The important thing is what you have here is a plethora of quality early 70s Rock with none of the drawbacks that might entail and very few weak points. Stray fans will love this and the uninitiated on hearing will wonder “why on earth weren’t they bigger?”