The Stranglers display the quality of their craft at The Copper Rooms in Warwick. macthehack reviews.

As a venue the Copper Rooms is an unpromising prospect.  The main concert room is essentially a low ceiling-ed ‘80’s student disco hall, giving the immediate impression of a concrete bunker.  It’s hard to believe the sound for this low key warm up will be anything better than a murky soup.

After the obligatory Waltzinblack intro, that concern is very quickly put to rest.  In front of the sound desk at least.  ‘Toiler On The Sea’ springs into life… and it sounds nothing short of remarkable.  JJ Burnel’s bass is at it’s prominent, aggressive best.  Dave Greenfield’s keyboards are high in the mix and sound quite majestic.  In fact, with crisp drumming from Jim McCauley and Baz Warne’s exemplary guitar work the sound was near perfect.  Ten out of ten to the road crew.

Given the platform of a full house on a Saturday night and a small venue – the like of which the Stranglers rarely play in the UK – it’s quickly clear that the band are in a relaxed mood, taking no time at all to get into top gear.

‘Toiler’ is still a great opener and now comes with an extended coda featuring some clever guitar work from Baz Warne, apparently mimicking seagull noises (at least that’s my guess).  Then it’s straight into ‘Goodbye Toulouse’ again sounding vibrant, fresh and of course driven by Burnel’s growling bass – also as convincingly menacing as ever it was.

The Stranglers are now one of those bands who have succeeded in mastering that very hard trick of growing old but still retaining their impact.  Like the best of the old bluesmen they’ve grown as performers but have retained the edge that first made them so compelling.

There is still enough of that original thrilling brand of psychedelic punk rock that made the Stranglers unique , only now they have a career spanning back catalogue and certainly here, with a home crowd behind them, the self-confidence to mix the natural aggression of the music with the good humour of a band doing what they love and enjoying every minute of it. 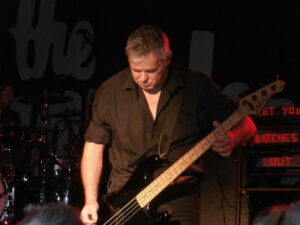 Highlights?  They are all over this set.  But ‘Curfew’ followed by ‘Relentless’ sums up the Stranglers enduring quality and power, being 27 years apart but both sounding like a band at the peak of it’s powers.

Of course every fan will have an opinion – ‘Time Was Once on My Side’ over ‘Lowlands’?  But these are minor gripes.  Given the consistent high quality delivery of songs and the sheer exuberance of the band, nobody here was complaining.  In fact, at times the band themselves seemed to have trouble keeping straight faces – JJ Burnel coming close to ‘corpsing’ during ‘Time To Die’.  Perhaps not the mood they had in mind when it was written, but it fits an evening when the band and audience were as one enjoying themselves, while the Stranglers effortlessly confirmed their status as still one of the great rock and roll bands.  No living on past glories – right here, right now, the Stranglers cut it like few bands ever have or ever will. Themeninblack are quite simply relentless.