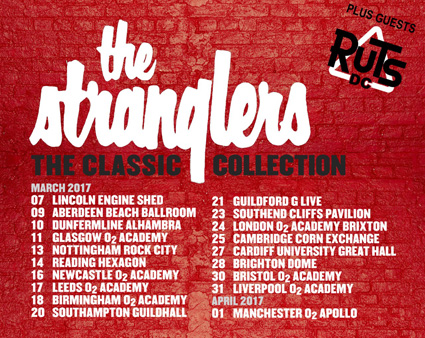 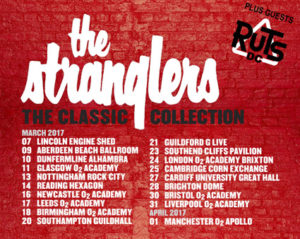 The Stranglers annual spring tour has been announced for 2017.

Last years tour was the band’s best selling tour since 1978 and saw them return to some of the biggest venues they have played for decades.

Ruts DC is the perfect choice for support – the band are on the form of their career and package is one of the events of early 2017.

‘We are pleased to confirm that March 2017 sees the band heading out on the road across the British Isles when they undertake a 19 date tour, entitled ‘The Classic Collection’, throughout the month. Kicking off in Lincoln on the 7th, they then cross the border for a trio of Scottish dates visiting Aberdeen, Dunfermline and Glasgow. The itinerary then works its way around England including a hometown gig in Guildford on the 21st and a return visit to the iconic Brixton Academy on the Friday the 24th. On the 27th they cross the Severn for a Welsh date in Cardiff before the final weekend in Liverpool on Friday 31st and Manchester Apollo on Saturday 1st April. Joining the band as special guests for the full tour are London dub rockers Ruts DC. Tickets go onsale from Friday 23rd September at 9 am although there will be O2 presales from 9 am Wednesday 21st. We will post links as soon as we have them. See you on the road in 2017…’