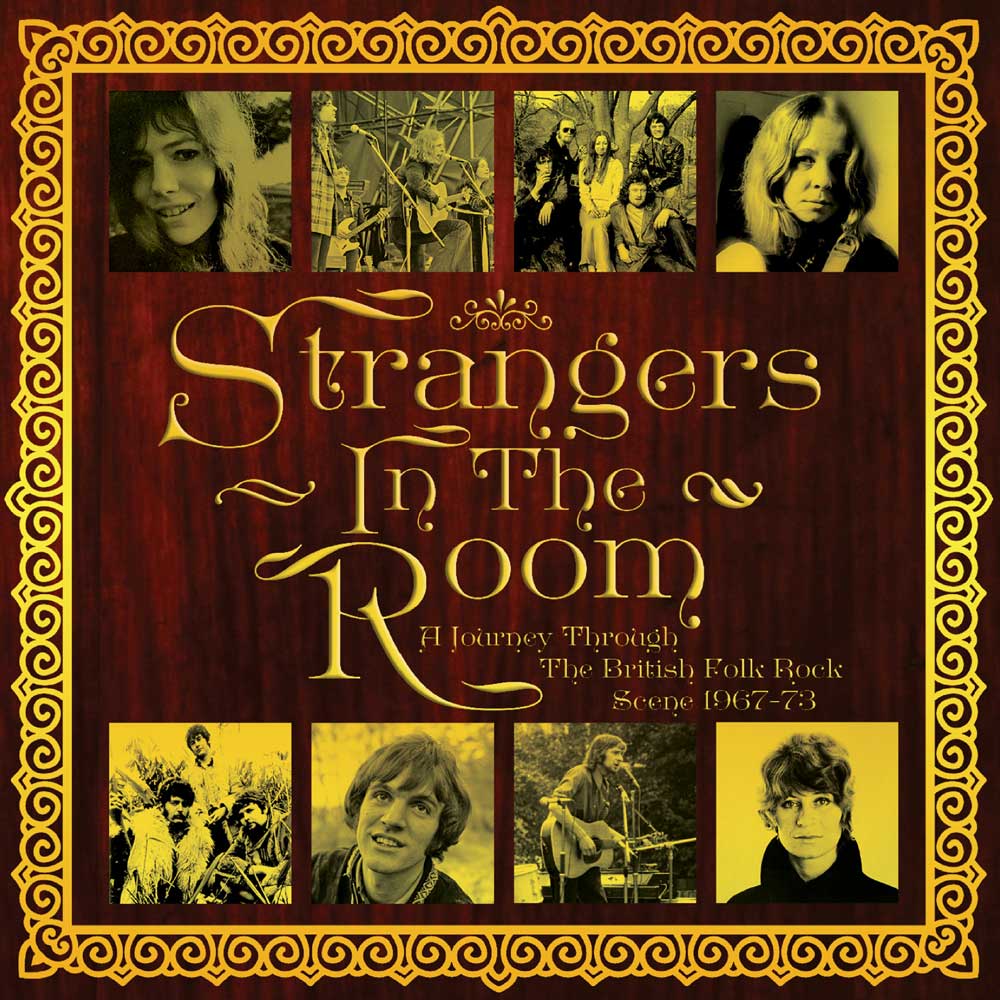 STRANGERS IN THE ROOM: A JOURNEY THROUGH THE BRITISH FOLK ROCK SCENE 1967-73

The formative days of Folk Rock get  three discs dedicated to those who set the standard for the genre that still holds its own today.

And that’s despite the confession of folk brigand Eliza Carthy (Louder Than Words festival interview, Manchester, 2018) that she can’t stand Folk Rock and has never knowingly listened to a Fairport Convention album.

She’ll not be interested then to hear how sixty tracks gather together the familiar with the less so. Songs that you’ll know from the folk tradition and plenty of others which  again, might be less so. If there’s anyone who could lay a claim to knowing all the bands and all the songs then you perhaps deserve a place at the head of the table if not the Eggheads team. Steeleye Span, Ralph McTell, Joan Armatrading  and of course Fairport themselves, all household names (in most musical households) sit alongside the lesser known (to these ears – shame on me I know) names of Mick Softley, Beau, Oo Bang Jiggly Jang and The Humblebums. The latter featuring Gerry Rafferty (nice bit of pub quiz trivia there) who’s also on the set although not on the blindingly obvious chart botherer Baker Street but the previously unreleased Who Cares.

They call them ‘deep cuts’ – Queen once offered a series (running to three volumes) where the lesser material was highlighted – hence Strangers In The Room appearing to be an apt title. Strangers who might ring some sort of memory bell or just be totally alien. Anyway, the magnificent sixty see the occasional well known chart songs sit cheek by jowel with the expected takes on folk traditionals, plus some demos and unreleased tracks. Disc one, subtitled Raise Your Voice And Sweetly Sing,  ranges from the solemnity of the warbling Sad Song For Winter and it’s medieval ambience to the fun of Oo Bang Jiggly Jang’s Hanging Tree that’s vibrant and lively albeit with an echoey retro production while you may well feel  tempted to sing along by substituting The Levellers One Way.

We go Back To The Garden on disc two which offers a more familiar listing. Matthews Southern Comfort’s Woodstock taking us, erm,  back to the garden. Fairport cut a rug  on Sir Patrick Spens and we can’t really talk the history of folk and folk rock (albeit British) without mentioning Dylan and his electric storm in the form of Like A Rolling Stone gets a rustic acoustic treatment from Canticle. “You said you’d never compromise” seems totally apt now and in hindsight of the folk rock journey. Typical is the inclusion of Lifeblud as we go Down Into The Midnight World on the third disc. Along with the prime movers and shakers, they were a band who played second fiddle to many of the leading lights whilst recording three albums of their own original material yet none passed beyond the acetate stage. And then there’s Jeremy Harmer whose own privately pressed album was the inspiration for his friend David costa to out together Trees. The genre (as is likely with many others) is packed with bands and musicians who play  a minute role below the tip of the iceberg.

Horslips come as a surprise maybe for some who’d associate them with the Irish rock scene, although their Celtic folk influences justify their inclusion while another mainstream artist in Joan Armatrading has her roots acknowledged.  The big names come thick and fast; Ralph McTell, Shirley Collins, Pentangle, The Incredible String Band (whose impact on the fledgling Zep clearly influenced their third album) and what else but Sandy Denny’s Who Knows Where The Time Goes could provide a predictable but welcome close to the set.

There’s no doubting some of the influence of the higher profile names on the scene and beyond and still many of them go on.  Fairport are regularly featured in the likes of PROG magazine who also recently hosted a lengthy Ashley Hutchings interview.  These three CDs may have just scratched the surface and players like Martin Carthy with his encyclopaedic knowledge could no doubt talk for days on the history of folk music and its long and winding journey. There may be a few fingers in ears, enough farewells and adieus to sink a battleship and I’d guess a fair few chunky sweaters involved  but Strangers In The Room does enough to highlight the vast range and variety in the emergent British folk rock scene in the late sixties.

Listen to Fairport doing the old warhorse Sir Patrick Spens which appeared as a bonus on Leige & Lief :