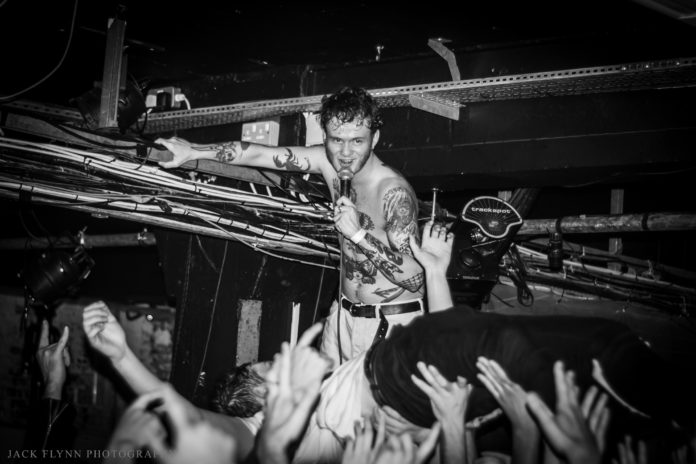 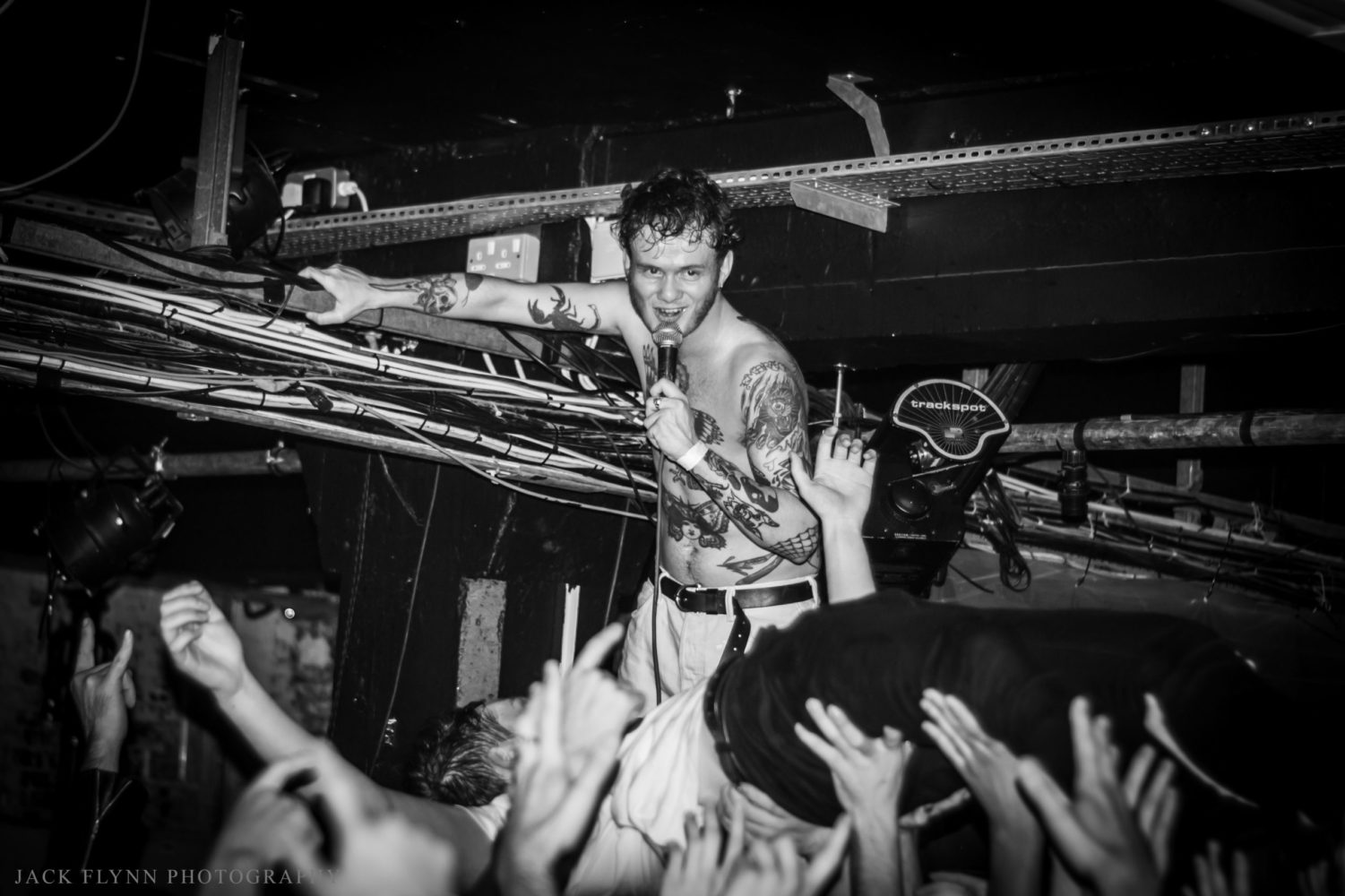 A consistent barrage of turbulent, unruly punk, sewn together with melody and riffs that’ll stay with you for days afterwards. Strange Bones deliver a show of unrivalled intensity to a sold-out London crowd.

Stepping foot into Werkhaus, the East London venue for Strange Bones’ London leg of their current UK tour, we were greeted with the band’s own installation of “A Depiction of Blitz”, a showcase of the artwork surrounding their soon to be released EP Blitz Pt 2. Flickering TV screens stacked up into a sinister looking pyramid, and enigmatic haunting visuals projected around the room helps set the scene for the night of carnage about to unfold.

The opening act for the evening was Bob Vylan, a raucous London two-piece consisting of Bobb13 Vylan on Drums, and Bobby Vylan on vocals, accompanied by a disembodied guitar track throwing down violently heavy riffs triggered by Bobby’s footswitch. Their set was genre-fusing, politicised and angry. The perfect support act for Strange Bones. Delivering a vicious combination of rapid-fire grime vocals backed up by a savage hardcore punk soundtrack, they took aim at; Boris Johnson, London police, and rich kids who adopt council house fashion as their own, whipping the crowd into an indignant frenzy. 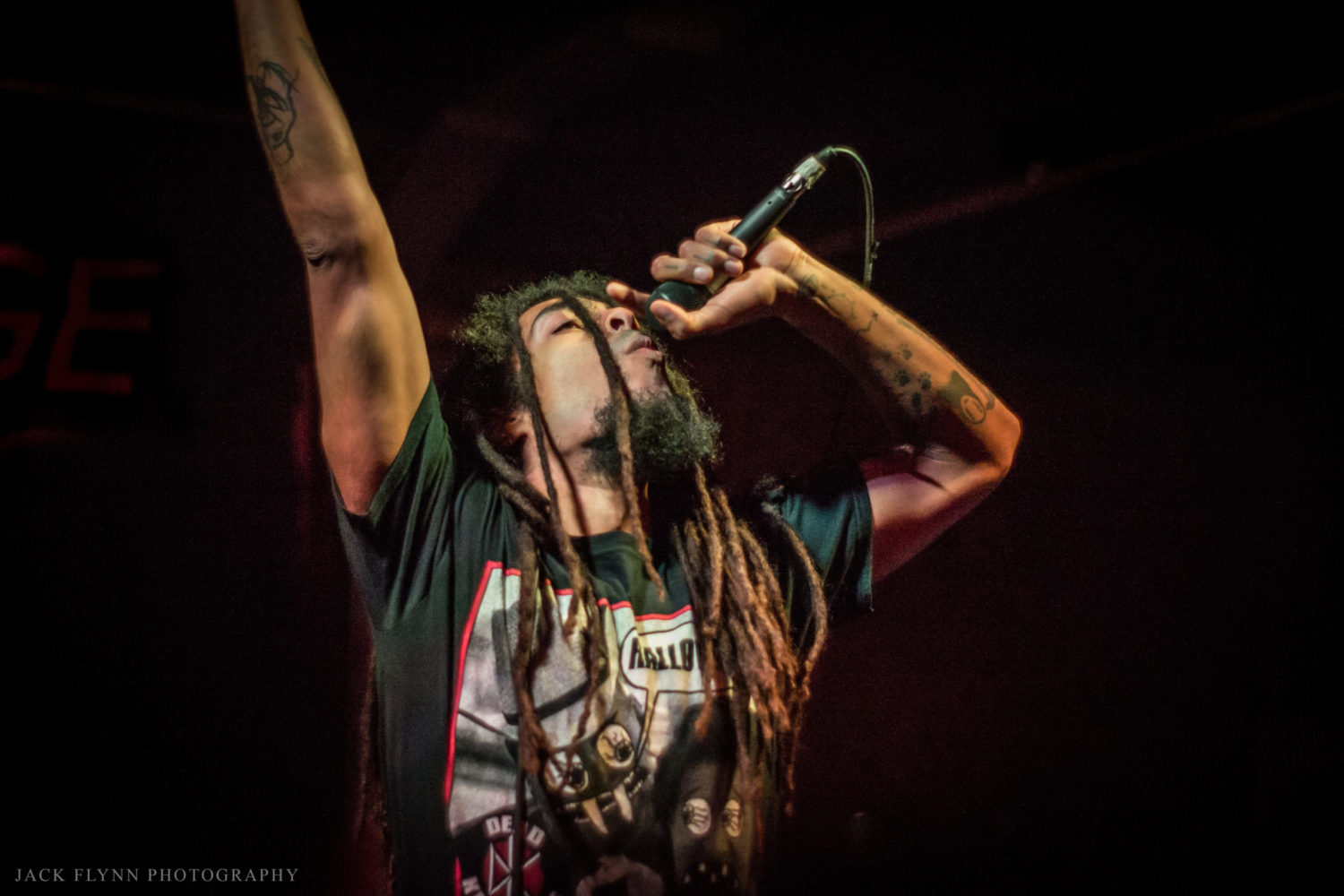 “Strange Bones you’re gonna have a riot on your hands later!” Bobby shouted grinning gleefully at the crowd’s hyperactive enthusiasm and rewarding their eagerness by handing out his own bottle of Jägermeister proclaiming, like a messianic cult leader doling out communion wine, “If you have a cup, I will fill you up!”

Despite the frontman’s ferocious onstage demeanour, Bob Vylan conclude their set with a big group hug with the crowd. Having dispatched a satisfactory amount of love to the congregation, Bobby runs back onstage and launches his entire body into the drum kit, and with that, the duo triumphantly exits the stage.

An ominous electronic soundscape fills the room, alerting the expectant crowd. Two huge projectors are fired up, blasting the walls either side of the stage with eerie technological glitching visuals, announcing Strange Bones entrance. Kicking off with their newest track released this November, Strange Bones blast the crowd with ‘Napalm Über Alles’, a powerful alliance of heavy guitar, drum & bass beats, and electronic synth parts that even The Prodigy would be damn proud of. Next up it’s ‘We The Rats’, the title track from Strange Bones’ 2017 EP. The familiarity of the bouncing guitar riff, and sing along chorus gives the crowd the incentive to go absolutely mad. 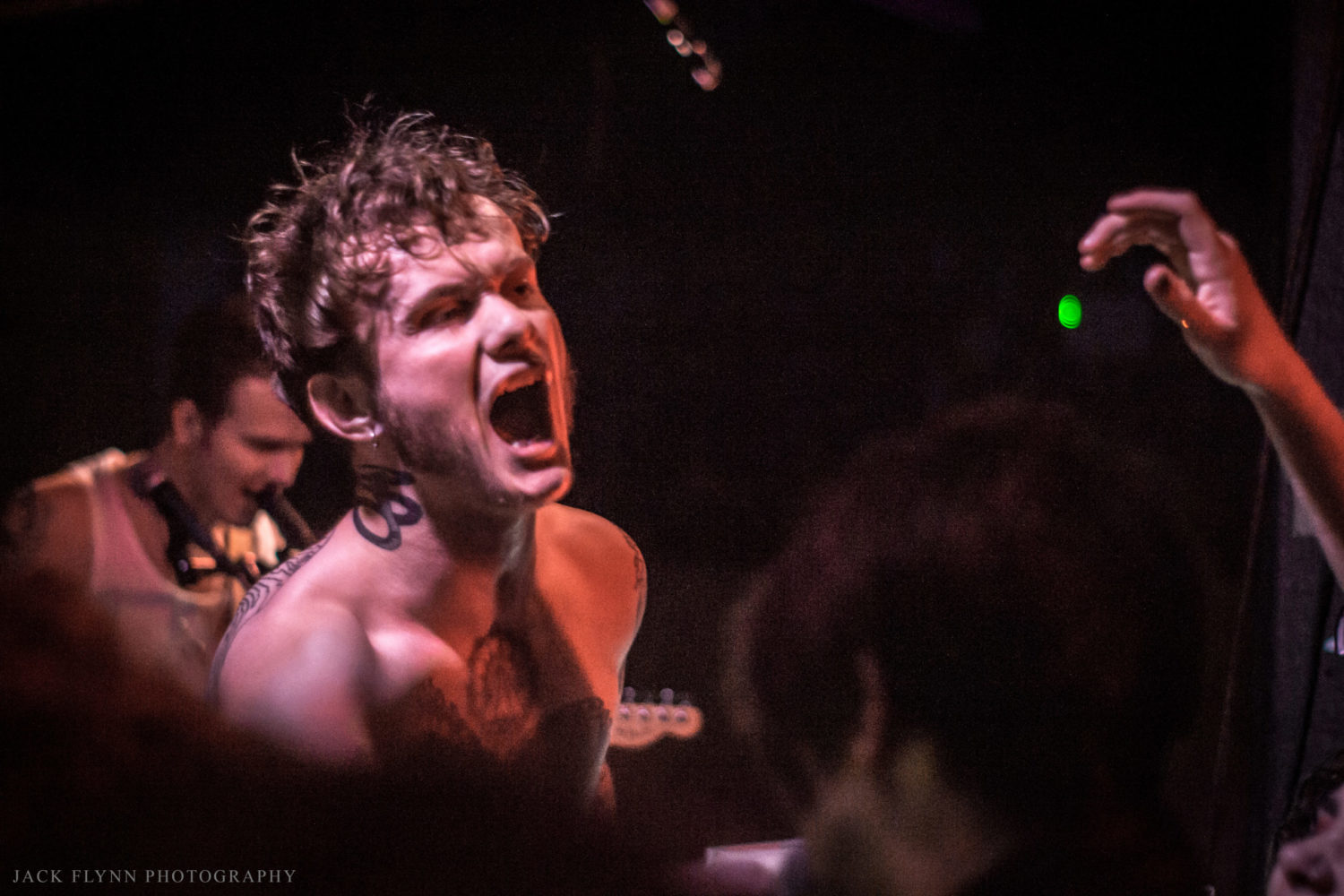 Lead singer Bobby Bentham (yes the third Bobby of the evening) was in full on berserker mode, launching himself between the crowd and the stage more times than I could count, as well as scaling up the speaker systems at any opportunity. Inspired by this bit of ingenious stage parkour, the crowd begin to treat the right-hand speaker as some sort of public diving board at a local swimming pool. Maybe 20 different people queued up to have a leap of faith into the welcoming arms of the human wave machine that was the Werkhaus crowd, with Bobby challenging each diver to do a double front flip. If the ceiling was any higher they probably would have managed it.

Around halfway through the set, Jess Allanic from surfy fuzz rock trio Calva Louise joined the band onstage to perform a brand new unreleased track from the upcoming Strange Bones EP Blitz Pt 2, due out in February 2020. It’s not the first collaboration between these well-matched bands. Calva Louise toured with Strange Bones earlier this year and Strange Bones remixed Calva Louise’s explosive electro punk single ‘Belicoso’ for their recent EP ‘Interlude For The Borderline Unsettled’ Although every song seems designed to incite a riot at their live show, beneath the commotion is a catchy and memorable stand-alone tune which resonates, not just in the hard hitting way it’s delivered, but the way the words connect with the audience. 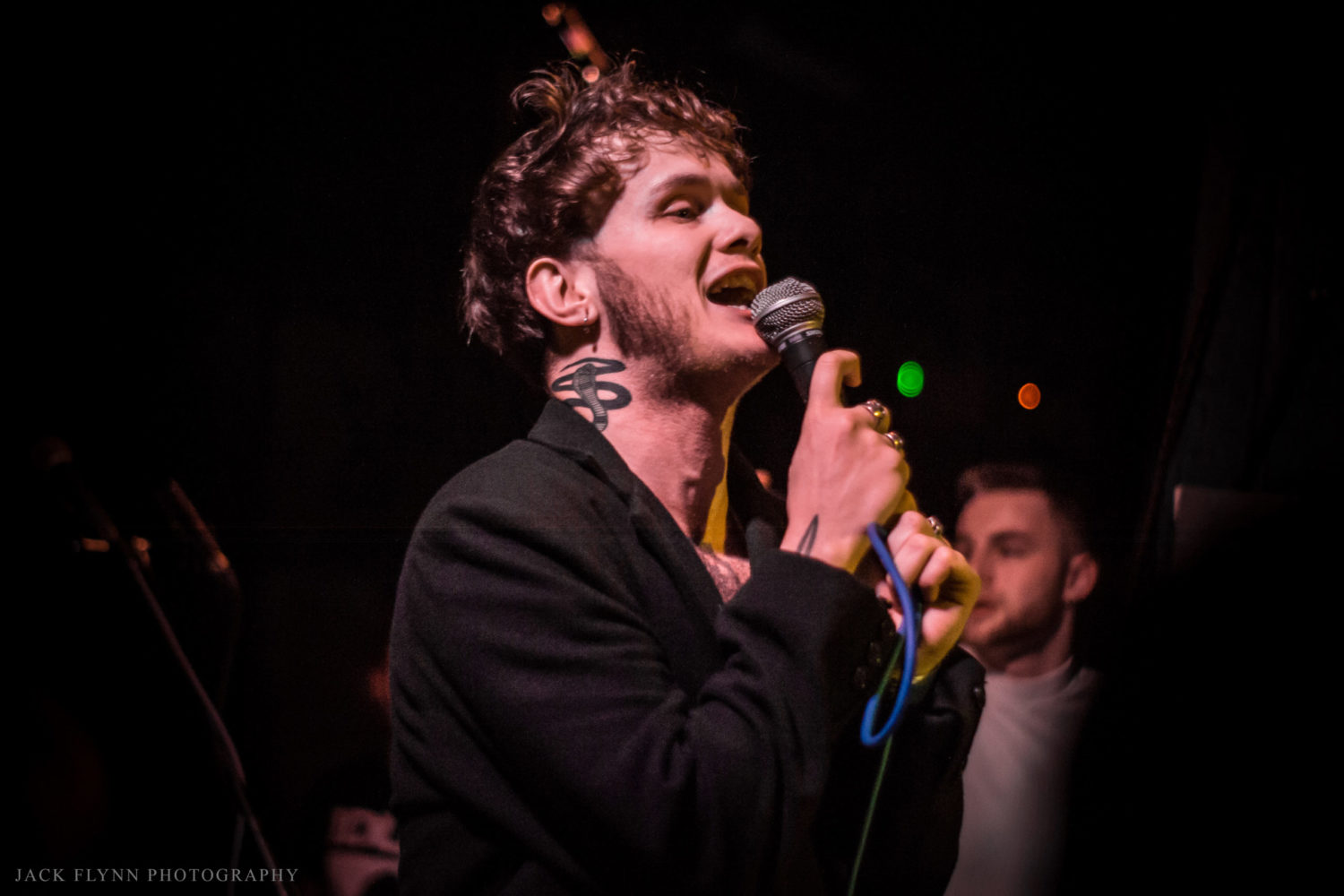 Strange Bones’ set was one of relentless energy as they forged through tracks like Vicious, Energy, God Save the Teen and Snake Pit. There was no time for slow songs. There was no need for an encore. The band gave everything they had from start to finish. A consistent barrage of turbulent, unruly punk, but sewn together with melody and riffs that’ll stay with you for days afterwards.

All words & photographs by Jack Flynn.
More writing and photos from Jack can be found at his Louder Than War author’s archive and at www.jackflynnphotography.co.uk
You can also find Jack on Twitter as @floodhounds and @jacktheflynn