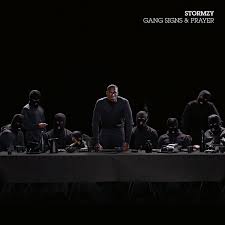 The strength of any form of music is the ability to tell all stories within its framework, the ability to somehow capture all emotions within its sonic rush.  Stormzy is the 23 year old British MC who is at the top of his game with a flurry of EPs and singles building a reputation ahead of his debut album. With grime being the much talked about genre of the moment and the most innovative music of the times his earlier releases were full of the swagger of the big breakthrough with a clutch of dancefloor fillers that seem to set the stable.

This year’s follow up is a breathtaking swerve with an emotional backdrop and darkness that sees vulnerability that adds to the power of his music with stark sensitivity threaded into the grooves like a 21st century version of what Joy Division did to rock music with an album that deals with personal loss over a brilliantly thought out series of grooves and music backdrops.

There are still moments of the urban swagger on the badass Big Boys but this is followed up by the gospel neo ballad of Blinded By Your Grace Pt 1 where the young MC looks to god, Cigarettes and Cush is a lovestruck ballad whilst Mr Skeng is dramatic strings and booming inner tension on an album were diversity is the key and an aural adventure that doesn’t take the easy route and somehow manages to make a record that mixes the underground and the new mainstream and reflect that the human condition can be a confusing bundle of contradictions from tough outer shell to an inner core of confusion and methanol skree.