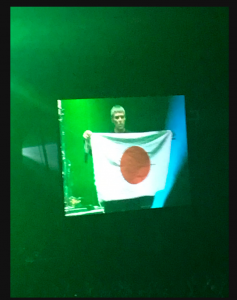 Near five years have passed since The Stone Roses headlined Japan’s Fuji Rock Festival in 2012, and here they are, back for a triumphant return playing two packed dates at the legendary Nippon Budokan in Tokyo.

An early evening start on both nights, the happy crowd dutifully queued outside in advance to buy t-shirts and merch, and then rose to their feet when the band took the stage and ripped into the anthemic “I Wanna Be Adored.”

Without a bad seat in the house, the venue’s rich acoustics, combined with Ian Brown’s smooth voice and the band’s overall great sound, perfected the experience. Despite an injured shoulder (he explained in fairly impressive Japanese “kata ga itai” = my shoulder hurts), Ian’s energy and good humor remained constant.

The by-Western-standards fairly subdued crowd (the Budokan is a seated venue, so expect polite dancing and clapping, sans mosh pit rowdiness) even prompted a good natured “Are you saving the cheers for the end?” when anthem “Fools Gold” got a slightly less roaring response than it typically generates.

“Made of Stone” was the crowd’s favorite, along with Reni and John Squire’s brief but impressive solos. Newer material “All for One” was also warmly received. “Beautiful Thing,” unfortunately didn’t make it on to the otherwise well-balanced set list.

“I am the Resurrection” and an elegant bow brought things to a perfect conclusion. No encore, but the satisfaction was immense. The Stone Roses have matured while retaining the charming rawness of their early years, and they looked relaxed and to be genuinely enjoying themselves. It made for two (tickets for the initial Friday sold out faster than you could say “adored,” prompting the Saturday date to be added) truly fine gigs.

We are happy to see the boys back in such fine form on the scene, and they will always find a more than warm welcome in Tokyo.

Full set list:
I Wanna Be Adored
Elephant Stone
Sally Cinnamon
Mersey Paradise
(Song For My) Sugar Spun Sister
Bye Bye Badman
Shoot You Down
Beggin You
Waterfall
Don’t Stop
Elizabeth My Dear
Fools Gold
All For One
Love Spreads
Made of Stone
She Bangs the Drums
Breaking Into Heaven
T.I.T.O.
I Am The Resurrection