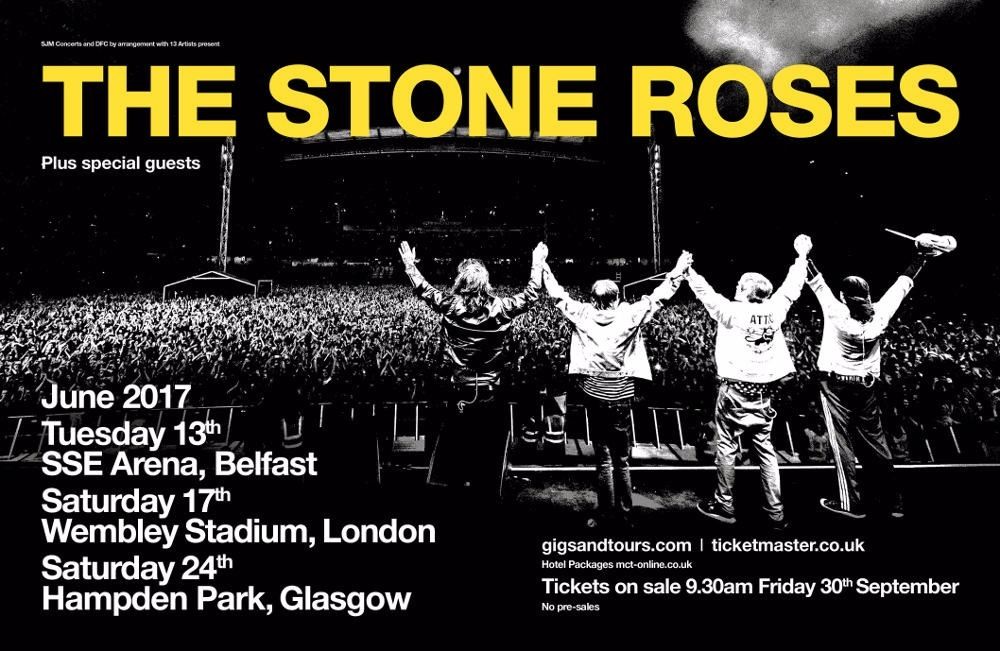 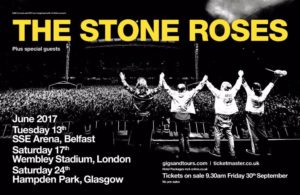 The final hurrah for The Roses? Joe Whyte review for LTW.

I will start by saying that I loved The Stone Roses; those two albums stand up against anything from that period. The Second Coming, long as it was in its gestation period, has some of the best (and the worst) material that The Roses recorded and the debut, well, enough hyperbole has been published about that sparkling record to negate anything I add as superfluous.

I’d seen them once before; Rooftops nightclub in Glasgow in the late 80’s (89, I’m informed) and albeit impressed, I’d thought them a bit emperors new clothes in that way that you do when you’re 25. The album, however, changed my mind rapidly. It was, I’m sure you’ll remember, a bit of a slow burner; released that May, it took a while for it to really take off as I recall. Then it was everywhere. Literally everywhere. In that pre-internet era, word-of-mouth, press coverage, club DJs, whatever; suddenly it was booming out of every shop in the town, every bar, every car that stopped at the lights. It was truly a phenomenon.

Anyway. To the Glasgow show.  I’d been a fairly late decision as regards going to the gig at Hampden; a variety of other weekend responsibilities meant that it was something of a last-minute dash. Given that, we only saw the last 15 minutes or so of Primal Scream although I’d heard most of their set while queuing to get in. Bobby and Co. played a greatest hits set for the most part and they were sounding good- I’ve seen them literally dozens of times over the decades from their earliest gigs and am well aware of how they can, in recent years, sometimes phone it in. Not tonight; they seemed to be having a ball and the crowd lapped it up and they were the ideal warm-up for The Roses.

On the way in, I’d walked from the Gorbals and ended up doing a circuit of Hampden as I looked for the box office. Now, I’ve been to two cup finals and two semi-finals this season and I can tell you right now, Celtic, Rangers and Aberdeen football fans created considerably less carnage around Mount Florida and Toryglen (the approaches to the stadium) than the fans of The Roses did.

You have to feel for the residents of these areas as the piles of vomit, streams of urine, barely functioning humans and empties littered the streets. The crowd seemed to be largely from two age groups; the folk in their late forties who’d been fans first time around and a more youthful bunch who, while clearly fans, were there for the occasion, T In the Park style, i.e., getting as hugely wrecked (or “mad wae it” in Glasgow parlance) as humanly possible. Two blazing drunk guys in their forties trying to batter each other while not landing a blow at the front door of the stadium, a young lad projectile vomiting whilst drinking a bottle of MD20/20 and not missing a step (or a gulp) and any number of paralytic folk blundering around outside looking menacing set the scene in not the way that I was wishing. A lad asking a tout on the corner for another ticket as “I’ve been fuckin’ chucked oot once already, mate” and a steward overheard saying to his colleague “Aye, the housing schemes of Scotland will be empty tonight” put the emphasis on the fact that this was indeed going to be a spectacle rather than a musical experience.

The crowd in the stadium were certainly up for it. The atmosphere was palpably electric as the sun started to set behind the West Stand and the smoke flares (so much for that “no pyro or fireworks” diktat by the security) started to obscure the stage prior to the band emerging. Before they appeared, a lone piper marched on and played a verse each of Scotland The Brave and Flower Of Scotland, increasing the excitement levels and again being reminiscent of football of old when pipe bands were the Hampden pre-match entertainment. As the lights illuminate the stage, from my vantage point, the thousands of white bucket hats among the crowd below look like daisies in a vast field of humanity.

There’s something about The Stone Roses; like them or not, the songs unite swathes of people from all backgrounds. It’s weird how this one band, who lets face it, pre-initial break-up, could never have filled a stadium towards the end, have songs on two albums that cross the generations and mean so much to so many people. From the opening bass notes of “Adored”, which the crowd sing back at a grinning Mani, it’s fair to say that the place goes suitably Tonto. It’s also fair to say that on a windy night in Glasgow, the sound was terrible; muffled, boom-y and indistinct, albeit it improved a little after about three songs. It actually sounded as if part of the PA wasn’t functioning and then it was, given the distinct change in the sound; from a bass-y boom to something approximating a decent mix. It still wasn’t in any way acceptable for a gig of this size, however.

“Elephant Stone” blazed in with all the frenzied acceleration that we once loved. Reni, as always, is a blur of sticks and Lawrence Of Arabia headscarf and making it look effortless as he drives the band on. He’s possibly the best British drummer of that era and his backing vocals throughout the set are a high point.

It has to be mentioned and it would be remiss of me to ignore it; Ian Brown’s vocals, at times, were awful. Flat, out of key and tune and sounding like bad karaoke. I read some comments afterwards about cutting him some slack due to the noise of the crowd singing. Come on. This is a guy who’s been doing this for 35 years and has the financial muscle to better himself with vocal coaching. On top of that, he probably had state of the art onstage fold-back and in-ear monitors so that’s no excuse. “Waterfall” and “She Bangs The Drums” were laughably bad. I looked around me to see dozens of folk in the seated area shaking their heads and grimacing. Watch the videos if you don’t believe me….

Despite this, on songs such as “Elizabeth My Dear”, Brown was completely on point. They say your voice changes over the years in pitch. Maybe this is the problem; however, couldn’t the band then change the key they play the songs in to suit Brown? Baffling. On the other hand, John Squire is possibly the most under-rated of guitarists. Standing virtually stock-still for most of the show, he is coolness personified. Those timeless licks, those chiming chords; there’s also clearly a real fondness between him and Brown. They’re eye-to-eye a couple of times and embrace warmly as the last notes of an epic “Resurrection” ring out. Brown calls out to the masses something about “Don’t be sad it’s over, be happy you were there to see it”, which given the pre-gig rumours, seemed to be a final line drawn under The Stone Roses.

The fact that they’ve managed two recorded new songs since the reformation in 2011 says it all; there’s clearly not an album of material that stands up to their Imperial period. Maybe it’s for the best. People grow tired of endless tours that hit town every other year and they’ve definitely taken this set as far as they can. The fact that they don’t play “Beautiful Thing” live is odd; is it too raw, too difficult, is there tension among the group members about it? Who knows. What I do know is that Brown and Reni avoid each other in the group embrace at the end and that tells its own story. It seems that opinions remain mixed about tonight; people are all over social media raving about the gig. For me and a lot of others it seems clear that whilst misty-eyed nostalgia for a more innocent age is all well and good, The Stone Roses have probably flogged this particular horse to death now.

This aside, the night was clearly all about the event, the occasion, the Gathering of the Bams; in that, it was a success. People on social media were talking about it being the best night of their lives, the best gig they’d ever seen and the like. I can’t agree. It was, to my eyes and ears, pretty grim at times.

A fitting end to a band that were as mystery-shrouded, at times shambolic and chaotic and as contrary as this one? I guess so.

Thanks for the memories.