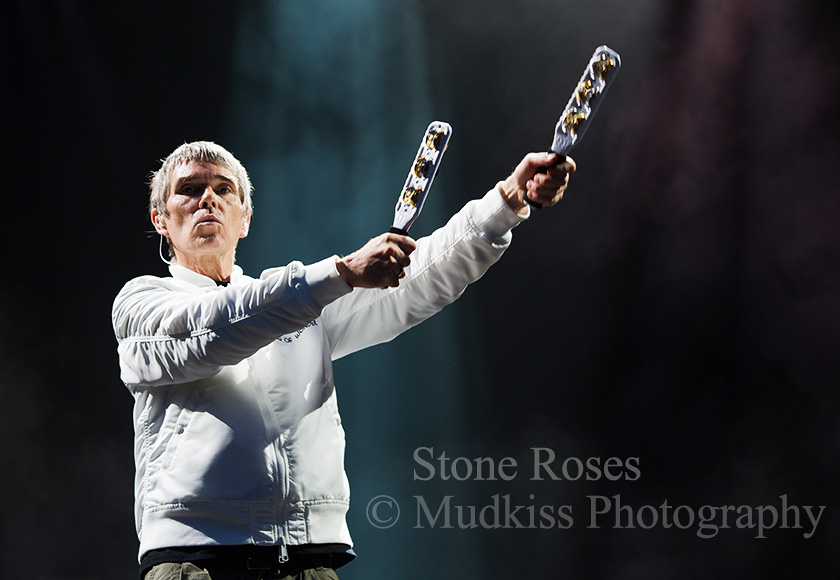 The second night of the Stone Roses short residency at the Etihad stadium finds a weekend crowd well up for reigniting the hedonism of Madchester with a soundtrack of classic tracks from (love them or hate them) this iconic band.

The lasers strobe low across the crowd, amplified in the haze of coloured smoke from flares burning bright on the battlefield of rock n roll. High above, in the open air over the stadium, those bright lines cut through the grey mizzle and dance along the roof line. From the stage those drum rolls quicken, sharply ricocheting as the bass kicks in, loose and low as it snakes through the familiar riffs, and the roar of the crowd swells. 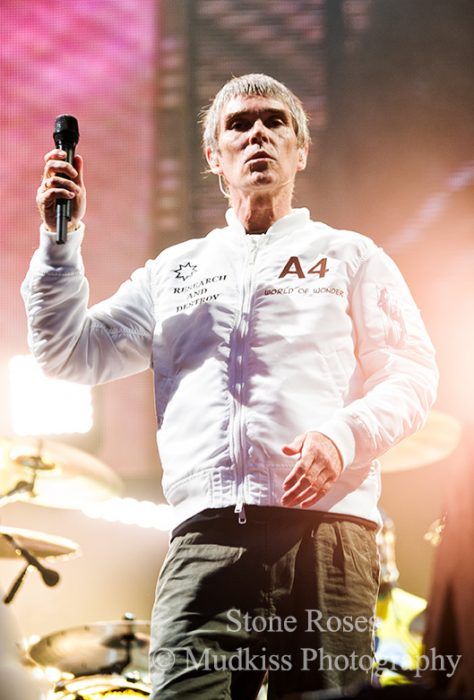 It’s the second night of the Stone Roses short residency at the Etihad in Manchester and it finds them playing to a crowd who came ready to party. From the front row of faces strained between the pressure of the bodies behind them and adoration for the men in front, to the seats in the sky way over at the back everyone here came to be connected through music. Perhaps it is only right that in these dangerous and fear-fuelled times we celebrate unity in a peaceful, loving way.

For regardless of any poe-faced critiquing of performance, musical vitality or style, if you don’t understand that people are using these songs as a conduit to becoming connected you probably don’t understand music, or people, so well at all.

This band, even after three decades, are a beguiling mix of mystery and familiarity. They appear back on the scene when people least expect it, and always show never tell. Despite the now iconic nature of each player and the band as a whole they have always let the music roll in front of them, a wave of beauty. It’s easy to hate and pick holes in the catalogue or the presentation but that is not this music’s truth. That is far simpler but for most hard to accept; this is the music of the North, the music of the underdog, the music of swirling acid colours that feed the tiny flame of hope and solidarity from the ashes and loneliness of the daily grind. 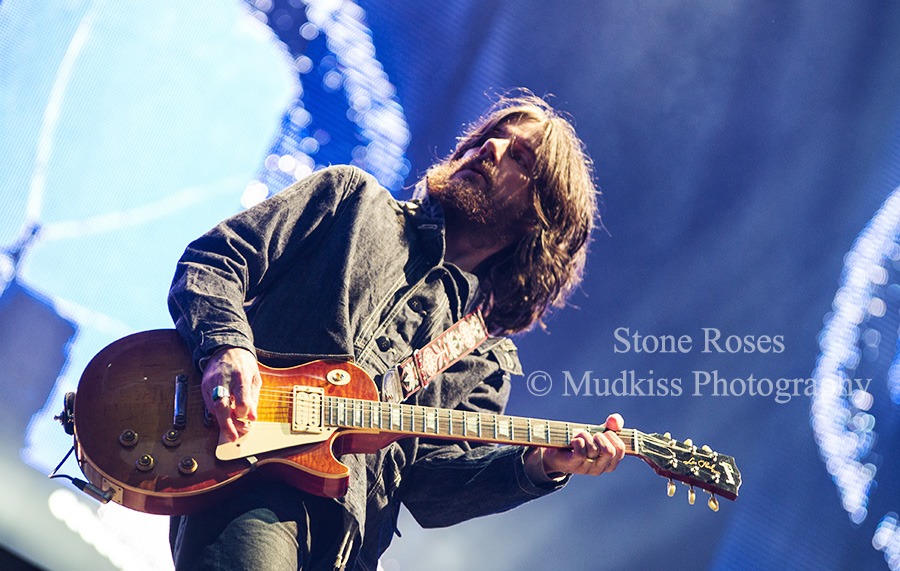 To do that from a relatively small catalogue given the age of the band is no mean feat in itself. Of course, the fact the set is made up of bona fide guitar anthems stretched out to their most lucid and loose-limbed, their most chiming and funk-rhythmed, doesn’t leave them on the back foot.

From the opening of I Wanna Be Adored, through the winding of Mersey Paradise, and to the political call of Elizabeth, My Dear they have a stadium-sized choir with them tonight. Love Spreads shows that failing to be instantly and ubiquitously popular is no barrier to becoming well-loved while Made of Stone fills the air with that mass of human connection, that fulfilled-longing to lift for just a moment the veil drawn across your own youth.

New track All For One gets a rapturous reception too. Is it carried on the excitement of the moment or is it genuinely loved despite the disparaging comments online? Is holding this band to high brow, innovative and worthy music right? Or does it turn out that a catchy tune and a chorus you can bellow with your mates, as you blink against the drizzle, is more than enough sometimes? 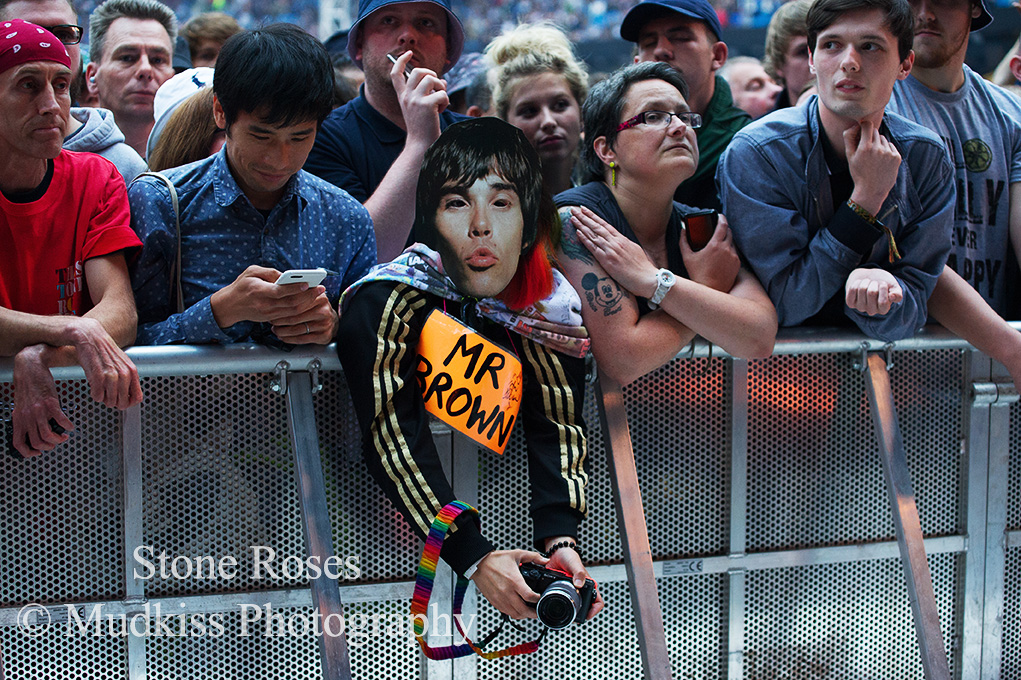 The extended drum solo intro to I Am the Resurrection is the distiller essence of the musical wonder of these songs. Loose-limbed and full of funk and tightly controlled roll, it teases as it turns before being joined by the rest and letting the bitterness of the lyric be sweetened by the joy of the crowd. The outro is the perfect foil, as instrumentally rich as the intro was stripped bare. This is the moment for me, where the band step from their isolated positions on the huge stage and visibly give themselves over to the songs, let themselves be a part of it.

Were this crowd ready to party and indulge in what they remember or imagine the hedonism of Madchester was? Absolutely. And while the soundtrack is vital to invoking those memories, or the legislated nostalgia for a musical movement that flourished more than two decades ago, it is as much about the sheer will of the crowd as what the band are bringing.

Is anyone surprised when it isn’t note perfect? Unlikely. They certainly don’t care, probably most don’t notice. These songs are carried inside everyone there as much as they are witnessed live tonight. They are in the beats of their heart and the rose-tinted memories, in swell of love spilling over in the arms aloft sing-a-long between best mates, they are their youth. 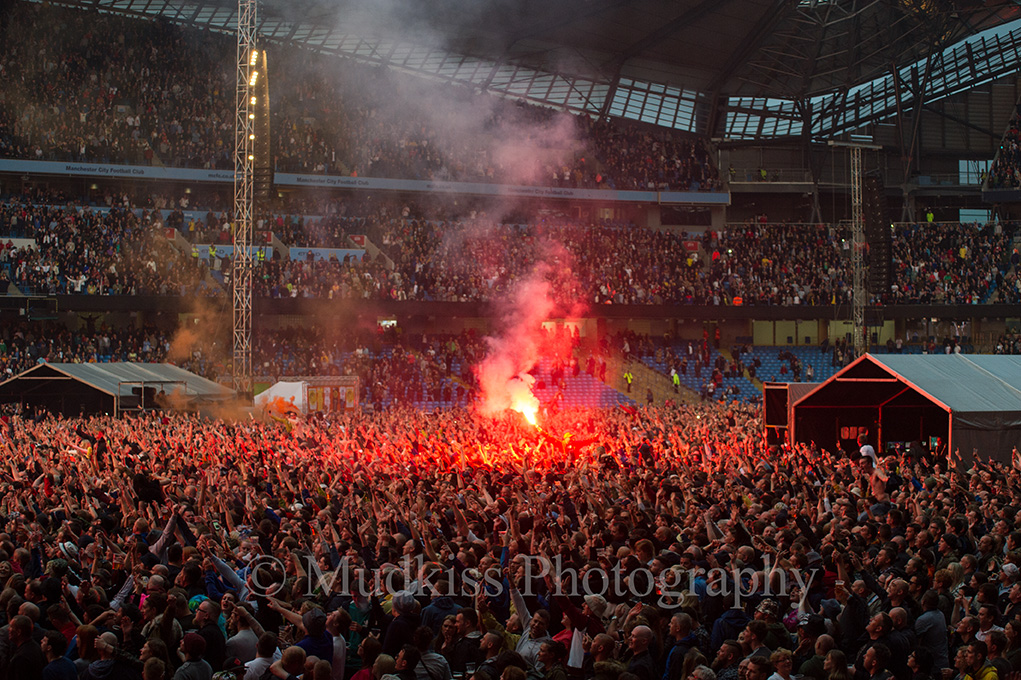 The power of this band is in the everyday and enduring connection of their songs, filling a stadium with music-induced love where even those in the rafters are monkey-walking on the spot with fists thrown high. The ground they broke with their sound may have been much ploughed by others since but it’s the comfort and the joy of something so familiar it is a part of you that makes this soar again tonight.

Please note: Use of these images in any form is illegal. They are NOT available to purchase or license due to a photo agreement with the Roses management.

All words by Sarah Lay. Sarah is editor of Louder Than War and can find her on Twitter, read her author archive or her blog. She provides LTW’s recommended track of the week on Radio Andra’s The Rumble – tune in each Tuesday from 8pm for two hours of underground music.