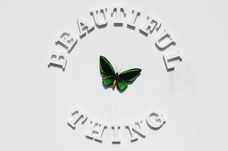 (You can listen to the song on Spotify and Vevo)

The Roses deliver a  classic…

In which the Stone Roses find their groove thing.

The two new songs that were recorded recently saw much talk of the shimmering groove – that certainly wasn’t All For One which was the Roses doing their terrace anthem bit – which makes sense as the group were always as much steeped in Slade and Slaughter and the Dogs as any other musical forms. It was a marmite single but recent live gigs have seen it make sense as an anthemic rabble rouser

Beautiful Thing see a return to the much hallowed period between the first and second albums – to a time where many music scientists predicted the band’s second album would have sounded like if they hadn’t been bogged down in court, fall outs, and the general brilliant chaos that always surrounds the band. This mooted second album was going t the ballistic funk of Can meets Sly Stone meets Jimi Hendrix and there were hints of it with the smouldering Something Burning and the verses of One Love and even on parts of Second Coming itself.

The songs starts with that sort of reverse reverb guitar noise they are so fond of when wigging out and then into a Fools Gold style monster groove that loops throughout the track with John Squire doing everything on that guitar – the wah wah licks, the Hendrix flights, the reverse guitar lines – all sinuous and perfect as it tumbles along through the seven minute groove. Ian Brown’s vocals are strident and confident with talk of crucifixion, John Lennon and music as redemption and revolution and a Northern mysticism cutting through the grooves.

The middle of the track sees a percussion break down  before a really cool backwards guitar build up at the end and we are real suckers for backwards guitars – totally love them. The chorus is really catchy, an arms in the air thing and not too far away from some of Ian’s solo stuff but married to exquisite musicianship of the Roses that makes this a great second single.