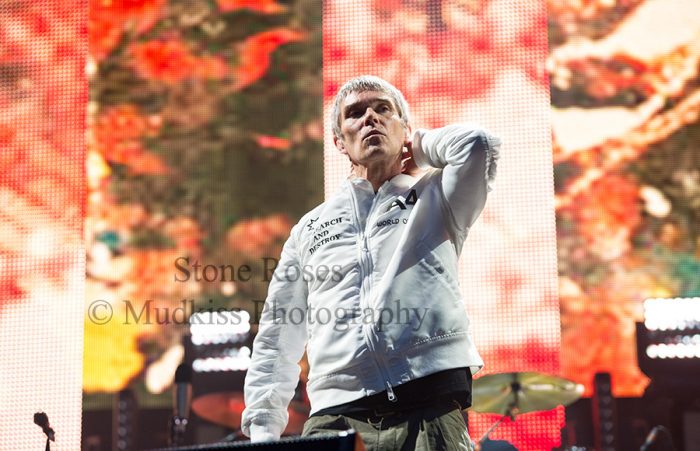 A lot has been written about the Stone Roses triumphant series of shows in Manchester. The band sound great and the atmosphere is electric but in the mountain of the words no-one has mentioned the world’s hugest choir who convened in the stadium and back the Roses with a gusto and enthusiasm unseen in any arena for years.

They arrived from all over the UK and even without rehearsal, this army of music freaks who knew each song inside out. The old mods and punks – grown up and grown out, acid casual survivors with chemical skin, backstage Moston nutters and even the occasional superstar footballer, also strange looking acid drenched characters and wild eyed Glaswegians with eyes on stalks and a free embrace for anyone as well as wild eyed skinny teens in sharp and angular casual all drawn to the cavernous Eithed stadium.

Along the snaking streets threading into North Manchester they came. Filling the scrubby parks with their bonhomie and empty cans, practising their singing voices howling into the grey afternoon sky, jamming out the last few remaining pubs, cramming out the cheap motels – a sea of lemon T shirts and pop culture wardrobes. The people’s army for the people’s band.

Of course there was no space for this people’s choir on the stage so they had to fill the stands of the stadium where they waved their arms in the air to the fantastic Public Enemy who are on righteous fire.

When the Stone Roses take the stage the massed choir is ready and collectively hold their breath, all eyes on the Roses bass player Mani waiting for their cue…

All over the world there are big choirs. Estonia is a small country that is famous for its choirs that fill large halls, the Welsh valleys resound to choirs that can fill your eyes with tears. They say that the combined human voice is the most beautiful and powerful sound on the planet and as the Mani starts that legendary throbbing bass line thousands of voices sing it back to him with a joyful abandon that echoes around the arena and sound bizarrely beautiful.

There is something great about an audience making a show their own. The Stone Roses have always had this weird bond with their crowd. They may disappear for decades or hardy ever release any records but the love only intensifies and their voices get louder and louder.

It’s a haunting and powerful sound that is counterpointed by thousands of other voices joining in for John Squire’s guitar and even a few who are somehow singing the drum parts aided by flailing arms before a huge wave joins in with Ian Brown for the vocals. It’s a haunting and powerful sound and like nothing you ever hear at a gig. A sea of arms in the air and voices floating up to the sky. A communal community singalong. A moment of communal beauty in a world gone mad.

By the time they get to the real singalong songs like Made Of Stone – a song with what is one of the greatest choruses of all time-  the 60 000 strong choir has made the gigantic PA useless by drowning it out with their surging power. This Is The One is another level up while All For One may have been a marmite single but sounds anthemic in here with the added layer of thousands of voices and the iconic I Am The Resurrection sees the choir return to singing all the instrumental parts again. There was probably 100 people even singing the hit hat parts.

The people’s choir has been great tonight – perhaps never in better voice and their backing band wasn’t too bad either.