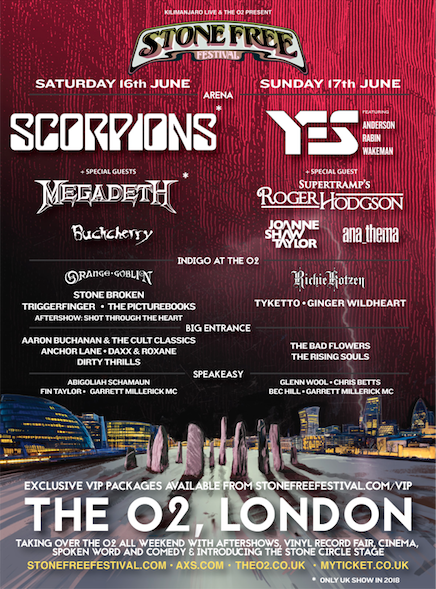 Kilimanjaro Live and The O2 have announced  a brand new selection of artists and spoken word entertainers who will be appearing at the third annual STONE FREE FESTIVAL, which will be happening on Saturday 16 and Sunday 17 June 2018 at The O2, London.

On what’s shapeing up to becoming a solid Saturday of heavy rock, joining legendary German rockers Scorpions and thrash titans Megadeth in the main arena will be sleazy Californian good-time rockers Buckcherry, while headlining indigo at The O2 will be British stoner rock icons Orange Goblin.

Elsewhere, the Big Entrance Stage will be there to welcome all STONE FREE FESTIVAL goers with a bang as they arrive into the venue, with sets from British hard-rock bands Daxx & Roxanne, Dirty Thrills, Anchor Lane and Aaron Buchanan & The Cult Classics featuring the ex-Heaven’s Basement frontman.

On the Sunday, joining prog-rock royalty YES (who celebrate their 50th anniversary in 2018) featuring Anderson, Rabin & Wakeman,  and former Supertramp frontman Roger Hodgson in the main arena will be the hugely acclaimed band Anathema, who won the prestigious Album Of The Year awards at the 2017 Progressive Music Awards for their magnificent eleventh album The Optimist, and who have recently swept the boards in the magazine’s Readers’ Poll. Completing the main arena bill on Sunday is blues rocker Joanne Shaw Taylor.

In indigo on Sunday, former Poison and The Winery Dogs guitar hero Richie Kotzen will be closing the stage, performing tracks from his prolific catalogue. Also appearing will be NYC 80’s hard-rockers Tyketto and The Wildhearts frontman Ginger Wildheart.
Meanwhile The Big Entrance Stage will be featuring thunderous Black Country natives The Bad Flowers and the dynamic soulful Scots The Rising Souls.

Here at Louder Than War, we’ll be looking at some of the acts in more detail closer to the event.

Feature by Mike Ainscoe You can find more of Mike’s writing on Louder Than War at his author’s archive. He can be found on Facebook and his website is www.michaelainscoephotography.co.uk