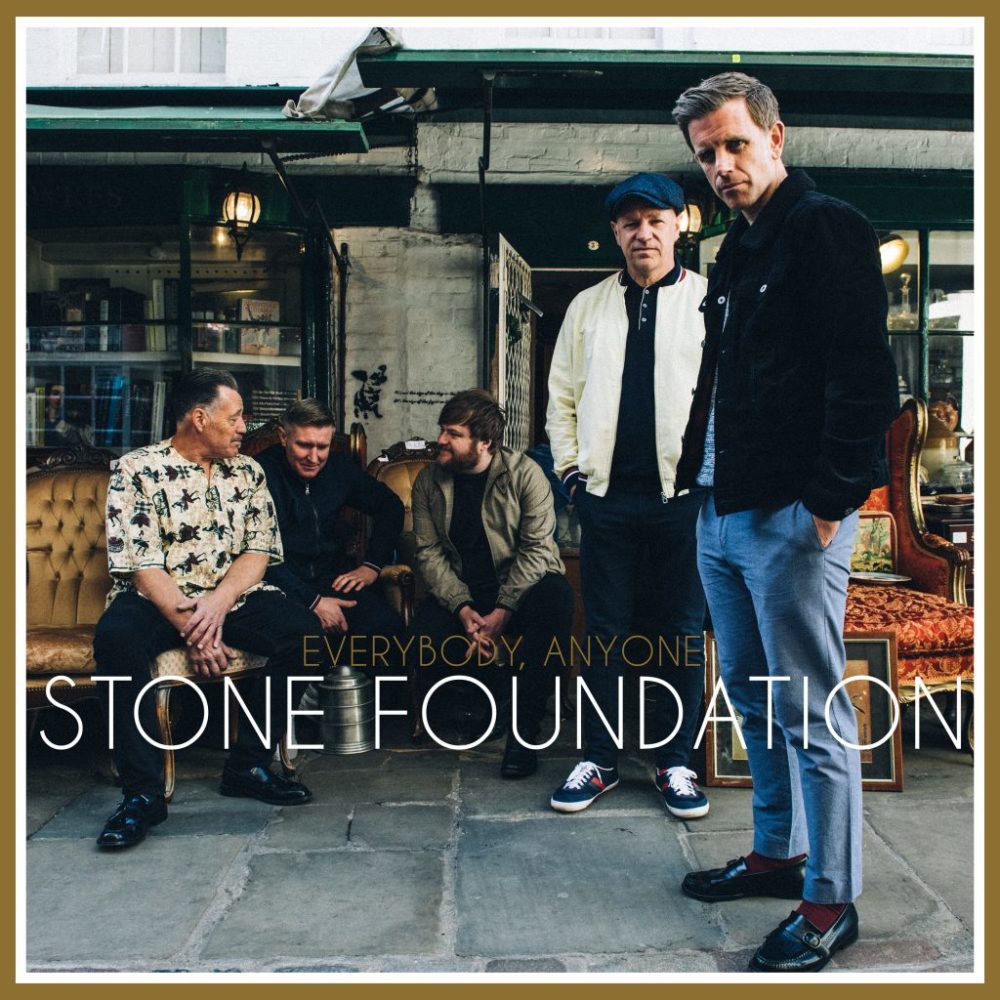 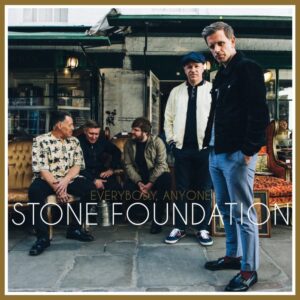 The new Stone Foundation album Everybody, Anyone is being released on 24th August via 100% Records. It is available to order on a variety of limited edition and signed formats. The album features 11 new Stone Foundation tracks and was recorded at Paul Weller’s Black Barn studio. It continues the band’s collaboration with Paul who plays on 5 of the album’s tracks. Other guest contributors include Mick Talbot & Steve White (The Style Council), Dr Robert (The Blow Monkeys), Hamish Stuart (Average White Band) and Kathryn Williams.

Stone Foundation have raised the bar higher once again with their stunning new studio album Everybody, Anyone released on August 24th.

Everybody, Anyone features 11 new songs and as before, there’s a sprinkling of guest musicians who feature on the album including Kathryn Williams, Dr Robert, Mick Talbot, Steve White, & The Average White Band’s Hamish Stuart. And unable to stay away, Paul Weller (who produced and featured on the last album) sneaks back in with a bit of piano, guitar and BVs on a couple of tracks.

The band buoyed & encouraged by the reception to their last album Street Rituals (chart position: 25), have taken a slightly different direction and hit upon a creative formula that clearly works. After a long period of extensive touring, which included headline shows at Shepherds Bush Empire and a storming set at Glastonbury, the band were so stoked that they went straight back to the studio to start work on Everybody Anyone while the creative juices were still flowing.

Everybody, Anyone sees a harder, heavier funk vibe than it’s predecessor but with the great grooves comes great songs. Talking about the album, bassist Neil Sheasby says: “In recent years I’ve heard a lot of records with great grooves but there’s no song, the message & melodies were still key to the records creation. To me it sounds like a very cohesive collection of tunes, a body of work that hangs well as a complete album. The next natural step for Stone Foundation”

Singer and guitarist Neil Jones adds “We wanted to make tunes that would unite people no matter what their background or beliefs may be and also for the first time in a while explore topics closer to home that affect us all, such as family, loss and finding comfort in some of the darker times we all face. It was important we changed the sound and made it harder and heavier and ultimately funkier and to me, these 11 tracks sound like 8 musicians maturing and developing as players (with a little help from some good friends)”

The first track to be released from the album will be the sumptuous soulful epic “Standing On The Top” available now which clocks in at over 7 minutes. With its heavy bass-line complimenting a floating guitar hook that links in the gorgeous backing vocals, it gives a real glimpse of the new sound. A video of the track has been done with filmmaker Joe Harvey. Shot in various locations that are close to the band, it has beautifully captured and created the perfect visual atmosphere for the song.

LTW: Can you recall your first ever musical memory?

Neil: I think it would have been the Elvis films showing on TV during the summer holidays. I’d be about 5 or 6. Incredibly fascinating.

What was the first record you bought with your own money?

When did you start to write your own music?

In my very first band, whilst at school at 14, we were called The In Crowd and mainly did Mod inspired covers but straight away we had a desire to write our own songs.

When did you start to play a musical instrument?

How did you meet the rest of Stone Foundation?

Phil (drummer) was in that school band so we’ve been playing in bands for over 34 years! I met Neil about 20 years ago when his band supported mine, we ran off and got hitched hence the start of SF

We met and formed Stone Foundation in 1997. I think we were both a bit disillusioned with our previous groups and wanted to try something fresh so me & Neil starting writing songs together

Did it take long for the band’s first recorded output to appear after you formed?

Yes it did actually, quite some time. It took us a while to find a steady line up and work with people who shared our vision.

Your recent output has had the hand of Paul Weller over it. When did you first encounter Mr Weller?

He called us. He had a demo that he asked us to finish which resulted in the song Limit of a Man. It really worked so we both decided that it would be nice to collaborate further which led to the Street Rituals album

Does Paul have any influence over your material output? Does he lend a hand with writing/jamming on the songs or is he a hanger on? ;)

Yes, to a degree, he produced the last one so he would often call up suggestions, the great thing about him is that he has the same outlook as us, we’ll give anything a try, it’ll either fall flat or more often than not it’ll really work out. We’ve co-written 3 or 4 tunes with Paul now, it’s always a thrill to work with him.

How did you get some of the other names to appear on your latest record? i.e Mick Talbot

We have a good relationship with Steve White (former Style Council / Weller drummer) and he featured on a couple of tracks on the new album so when Mick’s name was mentioned it was Steve that put us in touch. Both great musicians and wonderful souls too.

Can you tell us a bit about the new album, how long it took to record and where some of the ideas of the songs were formed from?

The albums called Everybody, Anyone it came together fairly swiftly to be honest. We were keen to return to the studio after the success of Street Rituals and fortunately myself & Neil had been stockpiling ideas and songs so there was no shortage of material.

As always most of the songs are inspired by the social landscape that surrounds us, I think there’s still a lot to say. I like to think our songs are fuelled by hope & compassion. This record is certainly a more funkier affair too. It’s a dancer.

Do you plan to go out on tour to support the album?

Yes, we are out n’ about on tour in the UK in October and November.

Lastly, what is on your turntable at the minute?

I’ve been checking out album called The Midnight Hour which is a new project from Adrian Younge and Ali Shaheed Muhammad who was involved with A Tribe Called Quest. Very nice it is too……