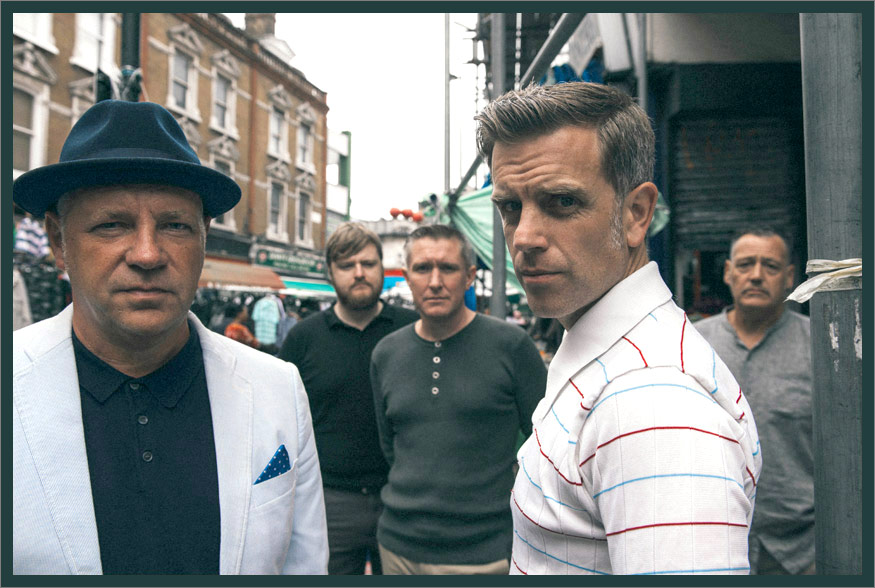 The pillars of Islington Assembly Hall were lit up in beams of bright purple, apt for a night that had a certain magical quality to it from the onset. Packed into the heaving venue, the crowd eagerly awaited some feel-good soul music to escape the blues and banality of everyday life – and Stone Foundation did not disappoint. In these tumultuous political times, their joyous escapism was gleefully received by everyone there.

Formed by two soul loving Neils, Neil Jones and Neil Sheasby, they began writing together almost 20 years ago. Enduring several line-up and sound changes, and the lonely road of following a dream to play a genre long past its heyday, their commitment to the music and to each other has stayed true. In 2011, they were finally repaid when they caught the attention of Specials’ drummer John Bradbury, the limelight beginning to flicker in their direction. This led to a support slot alongside the 2 Tone kings, and more recently the admiration and backingof The Modfather, Paul Weller. Producing their new record Street Rituals and featuring on several tracks, Weller has helped guide them to a new plateau of artistic accomplishment and stature as a soul band.

Considering their age, it should probably come as no surprise that their fans aren’t exactly in the exuberant vigour of their youth; I was almost certainly the youngest person there. With Mod haircuts and Rude boy pork pie hats everywhere, this crowd had clearly grown up in the 70’s and 80’s during Margaret Thatcher’s tumultuous reign. As we face the prospect of another Tory landslide, the parallels to the times when Soul, Punk and Ska was the soundtrack to the resistance are beginning to seem uncanny. And rightly so, Stone Foundation certainly don’t shy away from the trend of their heroes. Both Neils have spoken of their desire to “hold a mirror up” to the divisions of today, and provide a hopeful alternative that clearly appealed to this liberal, jubilant crowd.

The night was beginning to feel like one of my parent’s parties, especially when ‘Play That Funky Music White Boy’ began upping the ante to accommodate the band’s entry. And what an entry it was. Filling the stage with upwards of a dozen musicians like a mini orchestra, they blasted into the carefree euphoria of ‘Season of Change,’ the gorgeous chorus soothing the bitter remains of my hangover. It sounded like an old classic they’d found in a record store that had somehow escaped mainstream success, dusted off and polished for the 21st century. Despite the absence of the raspy croons of Bettye LaVette that give the record version its own sprinkles of stardust, lead singer Neil Jones did a stellar job of making it his own and getting the crowd moving from the get go. His voice betrays expectation for a skinny guy from the Midlands, soaring with the grace and might that great soul music requires.

He commandeered the energy of the crowd throughout the night, encouraging everyone to sing along –  employing call and response crowd-play freely. At times, his prancing around stage and ceaseless positivity teetered on the edges of cheesiness, yet it’s hard to blame him when so much of the hall seemed to share his enthusiasm. The stronger songs such as ‘The Limit of a Man’ and ‘Strange People’ helped sustain the bliss, melancholic trumpets, violins and saxophones used to evoke joyous optimism to great effect. Others like ‘Open Your Heart to the World’ and ‘Back in the Game’ left a little more to be desired – the sort of plain song titles that show what rudimentary uses of language you can often get away with in music.

But these were brief lulls in a night of delight and surprises. The most stunning being the introduction of the aforementioned Modfather himself, Paul Weller. Having been so involved in the making of ‘Street Rituals’, his appearance could have been half-expected, but even so the crowd’s response was rapturous. Chants of “Weller!” and “Who are ya?!” echoed throughout the room, some bowing their arms in reverence. Channelling his inner Sam Cooke, Weller once again proved the range of his abilities with a heartfelt performance of ‘Your Balloon is Rising,’ a stirring song that preaches hope and kindness in increasingly darker days. With his new solo record ‘A Kind Revolution’ following a similar trend of using Soul music to inspire hope, Weller and the band seemed perfectly in sync, his presence adding a gloss of gold to elevate this already glittering evening.

This determination to stay positive in the face of adversity characterised the whole show. Neil Jones urged everyone to embrace love instead of hate in these uncertain times, whilst Sheasby thanked the “No TV, no radio, people power” that has brought this band the adulation they deserve. True to this theme, they ended on an impassioned medley of Marvin Gaye’s ‘What’s Going On?’ and Thunderclap Newman’s ‘Something in the Air,’ the spirited, incisive lyrics of these classics ringing as true as ever. The feel good aura lingered in the hall long after the final note was played, proving that soul music as life affirming and blissful as this is a fitting antidote to this tempestuous era we live in.