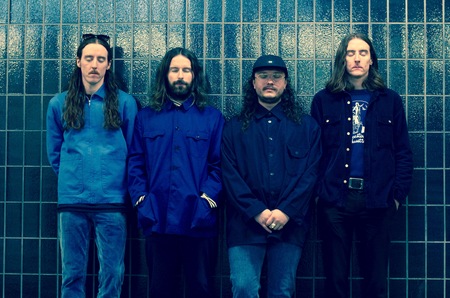 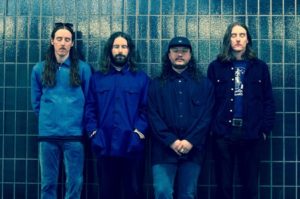 Following on from the release of their brilliant new single ‘I Came Here To Eat’ Stockholm’s Birthday Girl (Fran Baxter, James Corden, Martin Baxter, Joakim Sandegård) share an exclusive playlist of influences and current favourites with Louder Than War.

Songs From The Bat Cave

‘Music from our bat cave studio in Södermalm Stockholm. It’s dark here almost all of the year, here’s some music that distracts us from the chills and gets us excited for our 2 week summer.

The Electrician by The Walker Brothers

I remember listening to this song for the first time and it just blew me away. Hauntingly beautiful, tense, atmospheric and then out of nowhere releases into something magical. (James)

Cliff Adams Singers – ‘Parted’
I love the old fashioned sound of a large choir, the dark harmonies, hopelessness in the lyrics, ‘The Cliff Adams Singers’ do covers of old traditional songs and their record ‘ Golden years of Song’ has influenced my writing more than any re odd I can think of. (Fran)

Late on the scene with this band but started listening to their records this week and this song has been on the loop today. Great slow building, repetitive instrumental to send you inside your mind. (Martin)

10 minutes of absolute bliss.  Just close them lids and go with it. (James)

Though her voice is so sweet and clear, you hear the darkness in her soul and the lyrics are kind of the same, inviting but she’s telling you to fuck off. (Fran)

It’s full on furious punk from Stockholm but with really interesting guitar style and possessed vocals. You don’t need to understand Swedish to love Vidro and they’re amazing live. (Fran)

The discovery of the Goran Kajfeš music will improve your quality of life so start with this track and then head first into the whole catalogue. (Martin)

A song, which I’ve probably listened to a thousand times and it still has the same impact as initial listen. The repetitiveness, the hook, the simplicity and when the guitar kicks in, I want it to never end. (James)