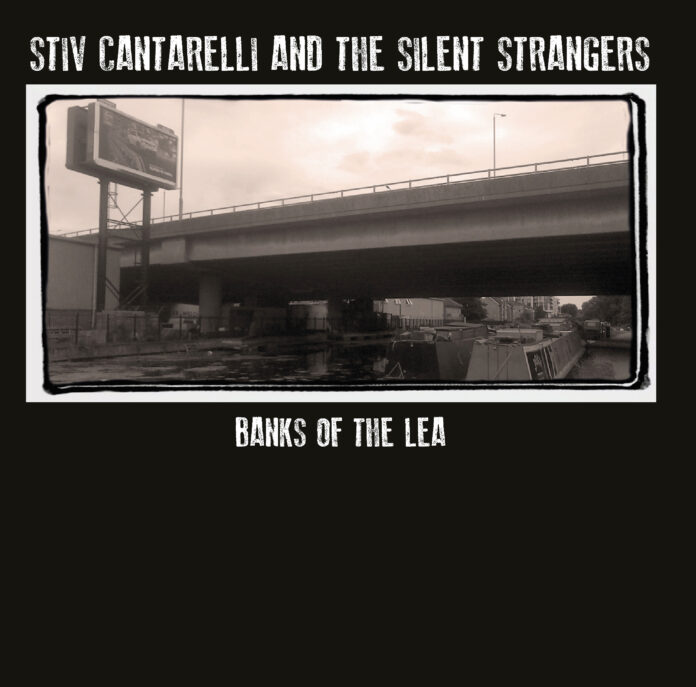 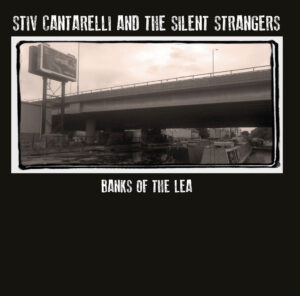 ‘Banks Of The Lea’, the new release from Stiv Cantarelli And The Silent Strangers fuses transcontinental rock, slide guitar, honky-tonk piano and blues sax with infectious rhythms and a rasping vocal. Former Italian country singer and American road trip blues man (collaborator with Richmond Fontaine) Stiv Cantarelli has cranked up the volume and applied his melodic roots to a compelling adrenalin-fuelled turbulent mix; rich in influences, steely to the core and tensioned with nerve tingling atmosphere. East London based producer Pete Bennett (Monkey Island, The Dublo, Morning Bride) tunes Cantarelli into frequencies that register the Hackney hinterland vibe applying his own crossover musical background of Americana and garage punk blues. The album was recorded with Ed Deegan at the analogue Gizzard Studios.

‘Banks Of The Lea’ distils the energy of a live sound whilst teasing out every possibility. There’s pace and drama, distressed around the edges, an articulate core within. Inspiration for the album, Hackney’s Lea river is over cut by ring roads into the big smoke and railway lines out, forging a path through expanses of marshland and industrial zones, pockets of nature reserve, artist communities and back street boozers. Discarded decaying objects drift in the current, a sense of pre-industrial deprivation lingers on and a very distinctive urban creativity emerges. Reflecting this is a dark brutalist beauty to the music, as if rising out of the concrete encircled brown hued waters.

Silent Strangers: Fabrizio Gramellini on bass, Antonio Perugini drums and percussion and Roberto Villa electric and slide guitar and saxophone are joined by Dave Dulake on piano and Hammond organ, lacing the music with distinctive flavours. A sense of expanse is channelled within oppressive tensions. The album explores rhythms of the city with aching lingering guitar solos and kick-ass gritty blues attitude.

Opener ‘The Streets’ is bravado laden with a seventies rock stride, gusto and bone-shaking turbulence. ‘Frenzy’ brings a sense of the night and ironic surrealist nightmare. Atmospheric ‘Jason Hit The City’ tells a dark tale with haunting overtones. ‘Razor / Pistol’s spaced guitar opening and lingering vocal build to adrenalin kicked anthemic pace and on into fervour. ‘Sasha’ is the love song of the album still raucous but softened by the lilt of background piano. The emotive vocal intonation in sync with resonating guitar leads to a crisp finality. Earthy sax on ‘Arrogance Blues’ with opening twilight vocal and infectious rhythm sets the mood for a swaying room. On ‘Lacalifornia’ Cantarelli’s arresting tones evoke the sense of underlying menace in the air. There’s a northern swagger (European rather than Mancunian in this case) pulsating with a hedonistic dive into thrash rhythms, building to sax led inferno and feedback fury. Contemplative escalating emotive guitar characterises ‘Soul Seller’ and ‘Leaving Blues’ evokes the call of the open road. With finality ‘Before I Die’ grinds deep bass tones and fractious guitar with iron man grandeur diminishing to stillness and a dash of piano to finish.

A hot contender for my favourite album of the year.