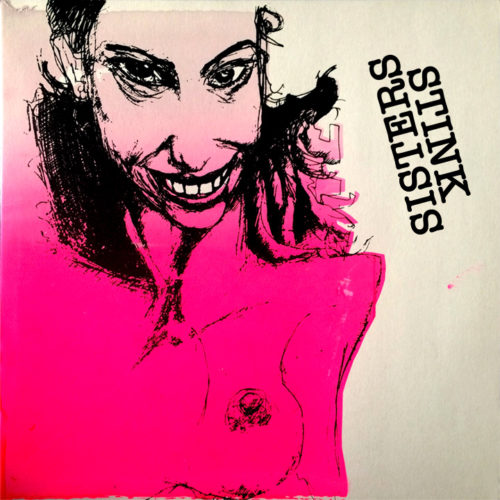 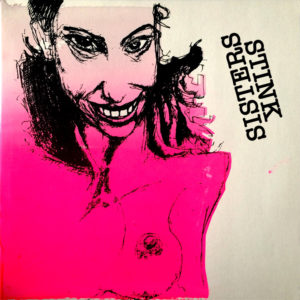 Rotterdam’s Stink Sisters have been ploughing their furrow since the early 1990s. And they’ve released a new LP; a raw, honest and often very charming work out that seems to affirm that, after all these years they have nothing much to prove to anyone. That’s typical Rotterdam.

The first thing that springs to note is the sound. It’s very flat in the sense that the drums are pushed high in the mix and all elements seem to battle with each other, all at once. Given this the record does have a feel of a live recording, or a first take; the sound feels as if it’s advancing towards you in a line, and there is precious little showboating as regards effects. This is not to say there is no variation in the sound; rather that is initiated in changes of mood and tone, and often driven by how the (pronounced) drum patterns lay down their thump. Though I should say we are treated to a very affecting a guest trumpet part by the brilliant avant-garde composer, Pierre Bastien on ‘Temps de Vivres’; an addition which gives an elegiac feel to the track’s tail out.

This flatness, however creates a presence, it posts a sound that sticks around and slowly reveals a charming, sensual side. And this underlying charm allows you to live with one or two things that would have otherwise irritated. The dual vocals, for example, sometimes strain to get to the note – which may sound bad written in a review – but to be honest this lackadaisical, Generation X approach (best heard on ‘Ashes’, the French-language zone-out known as ‘Temps de Vivre’,  and ‘Door In My Face’) just adds to the record’s enjoyably simpatico character. You can believe them and their straight-down songs, this music is not affected, it reflects who they are.

The tracks here almost all tell a straight story about something, there is a subject that is addressed directly and not a demonstration of some worldview or a load of clever-clever expostulations on a subject no-one’s that bothered about. It’s a record driven by feel most of all. ‘City of Winds’ is a sensual rocker where the simplicity of the message; heard in the refrain, “city of winds, city of smell, city of noises” does start to creep into your senses. ‘SLD’ is a slow burner and a very effective stoner track that is driven almost entirely by suggestion. A simple melody that almost trips over a slow drum pattern whilst a tale is drawled out. The track’s melody and flat, straight-faced vocal delivery has something of fellow Roffa band, Lewsberg, too.

Weirdly enough I find myself playing and enjoying this record a lot without really knowing why I play it as much as I do. It’s short, too, so I also spend a lot of time getting off the couch and flipping it over. Which could be an irritant, but it isn’t. That’s probably because, when all’s said and done, it’s a fine release.