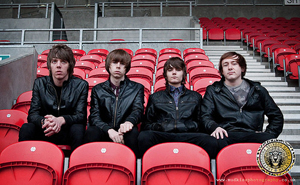 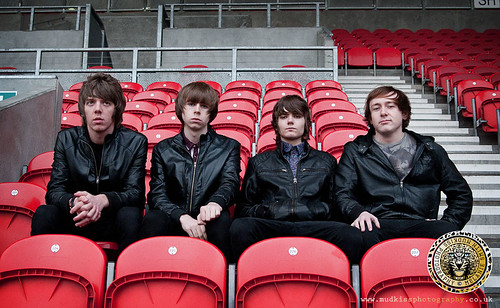 
I first encountered teenage indie band Stillia, (who all hail from St Helens on Merseyside) at the Warrington Music Festival last year and thought they really stood out from the usual names that play. Since then they have gone from strength to strength and cut a recording deal with Animal Farm record label and are beginning to get a large following in and around the North West area. The band are Jack Bennett, Matty Bennett, Connor Moran and Dave Sarbutts. Let’s see what they have to say for themselves.

Stillia – Jack:: I’m 18, the singer and guitarist, I’m never on time, and always just round the corner [laughs]. I study music and ICA A level at Sutton Academy. Manchester music has a massive influence on me, but I’m also into 50s & 60s music.

Connor: And I’m the quiet one, but not when I’m with the lad’s [laughs]. I’m 17 and the lead guitarist. I study music at St Helens College. I like a lot of modern indie music, but also 60s & 70s music. The new bands that I’ve been listening to lately are The 1975, Temples and Tame Impala.

Dave: And I’m the one with the brains and in this band someone has to have them [laughs]. I’m 18 and the bass player. I study Biology and Maths A level at Sutton academy.

Connor: Told you he was the clever one [laughs]. I take inspiration from a wide range of music from the 60’s to modern day.

Matty: I’m 16, the drummer and ladies’ man [laughs]. I study Music and ICT at Sutton Academy. I’m into anything from country to rock.

How long have you been together as a band and how did you all come together?

We’ve been a band for about two and half years with this line up. We all met in school and just jammed, then we realised we had something and it sort of took its own course and here we are today.

Did you get ever get any school work done?

Dave did he’s the clever one. When the teachers were looking for us, they’d always find us in the music department, school work wasn’t for us [laughs].

Where did you get your strange name from, does it have a good story behind it?

The name Stillia came about when we were thinking of names for the band and Matty was saying the worst band names. Jack said to Matty “are you still here” and suddenly we thought that would be a good name for the band, so we changed still here to Stillia, its silly but it stuck. 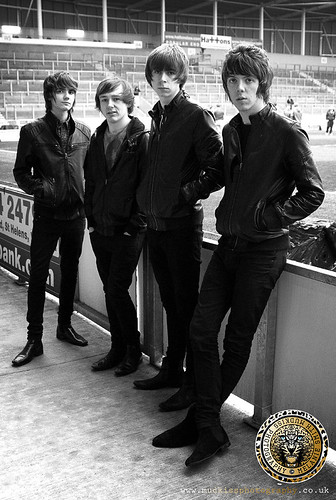 What has it been like since you formed the band, has it been hard work living out in St Helens trying to get recognition?

It’s been a ride and a half since our first gig. The first one was like playing in front of one man and his dog in a dive of a pub on a rough council estate, but it was a brilliant gig because it was our first, it had to be done.

Since that first gig we have played a lot of live shows. The first time we went to London we sold out a gig at a music venue called Nambucca in Islington. We recently went up to Dundee after being asked to play a gig up there by a promoter. That was a brilliant night for us, a big turn out and we gained a lot of fans from it.

We went onto supporting people such as Steve Craddock (Ocean Colour Scene) and The Clone Roses at the 02 Academy in Liverpool. We also supported them at the Parr Hall in Warrington, which were amazing gigs. When we met Steve the first thing he said was “you lot definitely look like a band” – which we were quite happy about [laughs].

We played at the Parr Hall again which was for a competition called Hotwired, which was organised by the Warrington Guardian. Hundreds of bands entered and we were lucky enough to win it, which resulted in us playing a headline slot at Warrington Music Festival -that’s where you first saw us play.

We can’t lie and say it’s been really hard to get recognition, because it’s not, we didn’t really try to get recognition. We just wanted to gig and play as a band, especially to an audience which was our aim from the start and with that came the recognition. More and more people have come to see us, so that has built up a strong fan base.

On the 7th June we will be playing at a local venue in St Helens called The Citadel. The Stone Roses, Happy Mondays and The Verve have all played there. We played in November to launch our EP, it was a sold out event and we got told by the venue after the gig that we were the first St Helens band to have sold it out. That was one of our best gigs and we will always remember it.

How do you start to write a song, who writes the lyrics, and how do you put it all together?

When it comes to writing songs we each bring ideas to rehearsals. We just jam on an idea, most of the time, if it feels good and sounds good then we’ll get into writing the rest, then putting it all together, a bit like a jigsaw.

What do you write about, what inspires your words?

We write songs about our life, youth, being in a band, our hometown, where we have been brought up.

The song that we are most known by is called You Only Live Once and it’s about us all going to a party after one gig we played. It was a mental night, there was a lot of beer and people doing sit ups, [laughs], so just having a laugh and not caring what other people think of us. Another one of our songs is called I’m Alright which is about our hometown, people telling us what to do and trying to make the most of what we have. The song is a bit of a stab at where we are from, but we wouldn’t change where we’ve been brought up because that’s what makes our songs. We’ve recently written four new tracks which are going to be released throughout the year.

Talking of your hometown, you recently opened the Saints v Leeds Rugby game in the middle of the pitch – how did that come about? That must have been an incredible experience.

It feels a bit mad to say we’ve played our first stadium gig, even though it was just opening for a match. It was amazing, the reaction we received was unreal and we were over the moon with it. Stillia have a good name in St. Helens, so a guy from Saint’s rugby who runs a few things asked us would we do it. He also mentioned to us about writing a new tune that the Saint’s team will walk out too, but nothing’s set in stone yet. 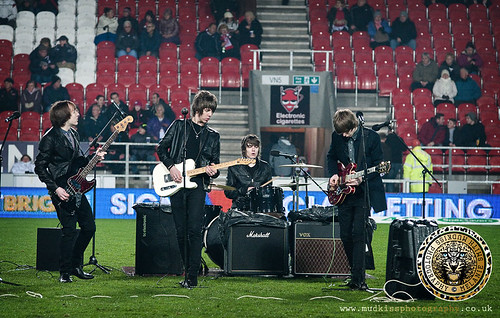 What has the response been like for the band since then?

The response has been amazing from Langtree. We’ve had loads of new followers and likes on Twitter and Facebook, loads of Saints fans posted tweets about the band, which is pretty cool! We also heard that a few Leeds fans watching the match were into us too. We’ve had lots of interests from music websites and bloggers.

Last week you told me about an appearance on TV, can you talk about this yet?

There is a new three part drama coming out about Cilla Black on ITV, written by Jeff Pope, and the band have got a bit of involvement, but that’s all we can let people know at this stage.

There are a growing number of young male bands doing the circuits what do you think makes you stand out from the rest – and why should people check you out?

We just think you’ve got to be good and have quality tunes. We have a lot of respect for bands that get up and just play their music in front of people, whether they are really bad or really good. At least they got up there and did it, which is the main thing, but it’s not like the 60s anymore, you have to stand out, with your image as well your sound and I think we do that. We’re fresh, we’ve got tunes that we believe in and I think certain people would be into them too, but not everyone’s going to like us, and we understand that.

So you’ve been signed by London based Animal Farm, where can people buy your music?

You can purchase our EP Living Loud on www.amazingtunes.com/stilliaofficial

We are currently in meetings with the record label and there will be tunes to follow which you will be able to purchase shortly, but we can’t reveal anything else at this stage.

What plans do you have for the bands future?

We are just taking it gig by gig, there will be a tour, the dates and venues are to be confirmed. There are gigs being booked all the time which is a good thing for us.

Our long term goals are to sign a big record deal which will include us going on a worldwide tour. Of course one of our main goals is to release a debut album. We do want to make money from what we are doing, but that’s not really what it’s about. We all love music and that’s all we know and want to do, we want to be able to live off playing gigs, travelling and making music and if we could do that then that would be the best job in the world.

Given the choice what band or artist would you like to support on tour?

Jack: I would love to go on tour with Paul McCartney, just to say you’ve backed a Beatle, probably never going to happen [laughs] but in seriousness I would like to get on a tour with the Arctic Monkeys, or Miles Kane. I think the big one would probably be Noel Gallagher, that would be something!

And finally if you make it big what is the first thing you would treat yourself to with your rock star pay packet?

Dave: A villa in a foreign country, sun sea and rock n roll.

Matty: I’d either buy a Truth custom drum kit or a 1969 Dodge Charger.

Connor: There are too many things but I’d have to say either a Ford Cortina or a 1970 Gibson es 335.

Stillia’s website is here and they are also on Facebook, Twitter and SoundCloud. You can catch them on Saturday 7th June at The Citadel, St Helens, Merseyside.

Interview & photos by Melanie Smith whose website is here.

May 31, 2020
0
layers of synths and drums have been replaced with washed out piano, while vulnerable soft singing blends with wailing of wind from the window.
Read more