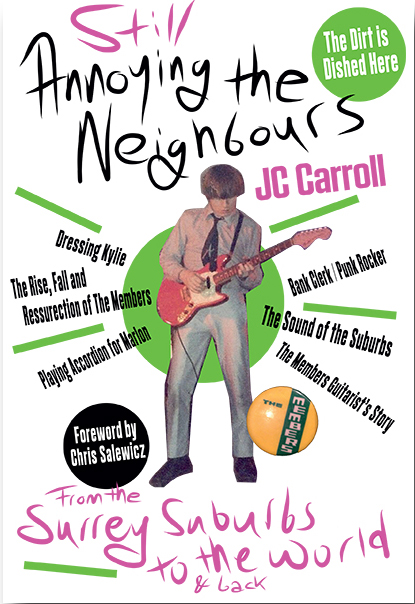 Everyone knows ‘Sound of the Suburbs’, but there’s a whole lot more to the story of the Members. Den Browne checks out the new book from the group’s main man JC Carroll.

I can still remember the impact the Members Sound of the Suburbs had on me when I first heard it. Punk and post-punk had been great, but now there was ‘power pop’ and second rate copies of the original groups. I was in danger of turning into a full-time reggae snob. But hey – the song had sounded great anyway, but now it was taking me somewhere else: cleaning the car with my Dad on a sunny suburban 60’s Sunday afternoon, Alan Freeman and ‘Pick of the Pops’ on the little transistor, turned down low lest we annoy the neighbours, though I’d try to sneak the volume up for the Who or Small Faces. JC’s soaring evocative guitar blazed a short cut back to the days of legendary Joe Meek-produced instrumental ‘Telstar’, the tremolo twang of the Shadows, a hint of Spaghetti Westerns. And the lyrics weren’t too bad either – anyone who’d spent their teens being told “Turn that racket down!” knew exactly what it was about.

I’m a fellow Surrey/west side London suburban kid like JC, so the early chapters were a head nodding joy, checking the list of early influence like Radio Luxemburg & the pirate stations, and going on to gigs at places like the Red Cow, Hammersmith, the Windsor Castle and the Nashville Rooms. I loved his assertion that the reason all the top UK 60’s guitar heroes – Jeff Beck, Eric Clapton, Jimmy Page, Peter Green – were all Surrey boys was because there was so little else to do apart from practice guitar or listen to records in your bedroom. The book’s made up of mostly short chapters, with the odd digression, which gives the narrative a nicely punchy momentum as JC recounts how the group formed, the writing and recording of life-changing single “Sound of the Suburbs” and the near surreal feeling of suddenly going out to millions via “Top of the Pops” when it became a hit.

As the cover states, it’s mainly the story of the rise, fall & rebirth of the Members, but there’s much more besides. I was lucky enough to meet and interview JC a few years back and was totally amazed by the man’s energy and can-do vibe, all driven by an overwhelming passionate love for music of all sorts, but especially the punk rock that was to be his ticket to freedom from the 9 to 5. I ended up with enough material for a small book, let alone an article. He explained the combination of European music like klezmer on the Blues, as well as the usual African sources, from there we went to file-sharing music collabs, the rag trade – it’s all here, along with much more about the practicalities of making a living through music.

He’s very good at describing the basic day-to-day nitty gritty of the musician’s life – booking studios, sourcing equipment, getting to gigs and back – so that some of the chapters, particularly the US tours, fly by and really give a feeling of those cramped hung over journeys, where people are starting to get on each nerves a little bit, knowing they’re going to have to do it all again the next day, and the day after..…but having put us in the back of the van, he’s equally skilled at stepping out of the frame to give us an elevated perspective, where the group are following in the path of eons worth of musicians doing the eternal troubadour slog from one gig to the next, or seeing the vast expanses of the US landscape as a journey through city freeway and desert, from one pro Members/punk rock enclave to another. He’s very astute on the changes in the US between their first visits in the 80’s and the reunited Members’ trip a couple of years ago.

Naturally, given the subject matter and the author’s ability as a top class raconteur, there are plenty of great anecdotes and characters in the book. Generally, they’re amusing, which makes it all the more effective when you get to a story that stops you in your tracks – a disillusioned Joe Strummer wondering if he can face making music again, trying to record with a perfectly attired but totally out of it Johnny Thunders, JC wishing that just occasionally he could turn off his pounding need to make more music, or the sad conclusion to Rat Scabies’ time with the Members.

And of course, just when everything seems to be well, gigging and recording when he wants with people he likes, he’s hit right between the eyes by Covid 19 shutting down all live music. Merch opportunities, recording sessions, all networking or money making options shut down.

There’s a lot more I could say about this massively informative and enjoyable book – like the well-chosen black and white photos scattered through the text – but suffice to say it’s a valuable document, recording how things really went down in the early days of punk, and essential reading for anyone who can still feel the exhilaration of something as perfect as ‘Sound of the Suburbs’. So if you still love the sound of that punk-rock electric guitar, this is for you.

JC from THE MEMBERS autobiography from JC Carroll on Vimeo.

All words by Den Browne.