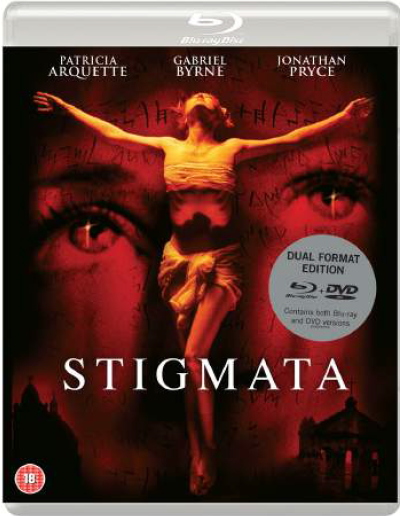 Jamie Havlin examines a supernatural horror film that proved controversial due to its religious content.

Father Andrew Kiernan (Gabriel Byrne), one the Vatican’s top investigators into miracles, visits a church in Belo Quinto in Brazil where a statue of the Virgin Mary bleeds tears from her eyes, the blood running all the way down to her feet. This phenomenon began the day that a saintly local priest Father Paulo Alameida died.

His body still rests in a coffin in the church and the rosary beads held in his hands are stolen by a young boy, who immediately sells them at the local outdoor market.

They’re snapped up by a female American tourist who sends them by post to her daughter in Pittsburgh, the daughter being Frankie Paige (Patricia Arquette), a pierced and tattooed hairdresser and all round party girl. She doesn’t seem particularly pleased to receive them.

While relaxing in a bath, strange things begin to happen to her. One of the many candles surrounding her tub flickers off for no apparent reason and a dove appears as if from nowhere. This is the prelude to her spontaneously suffering the first of the five stages of stigmata – nails hammered through the wrists by an invisible force.

Stigmata, in case you don’t know, is the appearance of marks or real wounds that resemble the five wounds that Christ endured during his crucifixion; St Francis of Assisi being said to have been the first stigmatic – so it’s maybe not a coincidence that the man character here is called Frankie.

Unfortunately for Frankie she will soon be plagued by more episodes of a similar nature. While on a subway train her back is suddenly lacerated as if by an unseen whip. Witnessed by a local priest, news of this event soon reaches the Catholic hierarchy in the Vatican and Father Kiernan is dispatched to investigate.

He meets with Frankie but the fact that she lacks any faith in the existence of God means that he has nothing further to discuss as there can be no religious significance to what she’s going through. The incidents of stigmata though grow more severe and Kiernan himself sees one incident where nails are brutally driven through her feet.

The film does swerve into Exorcist territory as Frankie begins writing and speaking in Aramaic (the language primarily spoken by Jesus and his disciples), shouting in the voice of Father Kiernan and mutilating her own body. At one point too, she cries tears of blood just like the Belo Quinto statue. 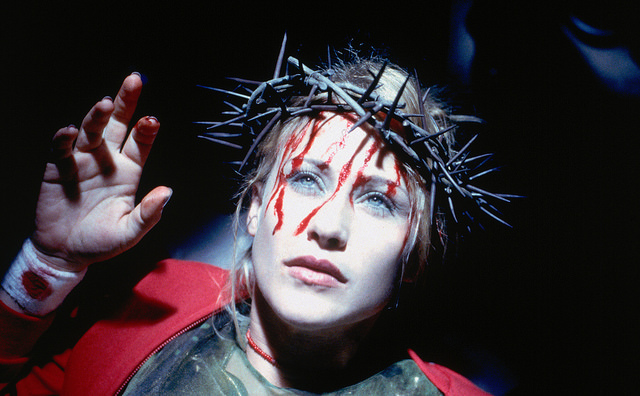 It took me a while to work out who exactly was possessing Frankie and even when I did work it out, the idea still didn’t make complete sense to me. A conspiracy theory subplot about a Vatican plan to suppress a lost gospel told in the words of Jesus himself also confused me at times and here I should mention that many critics, especially practicing Catholics, have pointed out the flaws in the religious aspects of the film – stigmata has no connection with any kind of possession, satanic or otherwise, and neither can it be transmitted by religious relics. I bet the Fortean Times loved the film though.

Stigmata is definitely worth a watch though, even if it does get a bit exposition heavy at times and veers towards the hokey.

Stylishly shot, the film also has an intriguing score by Elia Cmíral and Smashing Pumpkins’ frontman Billy Corgan, with Mike Garson (who played piano on Lady Grinning Soul, one of my very favourite Bowie tracks) supplying some keyboards.

Best of all is the acting, particularly the performance of Arquette, who is pretty much perfect in the role of Frankie, while Jonathan Pryce as Cardinal Houseman and Gabriel Byrne as Father Kiernan also impress.

The Masters of Cinema Series here present Stigmata on Blu-ray for the first time in Britain.