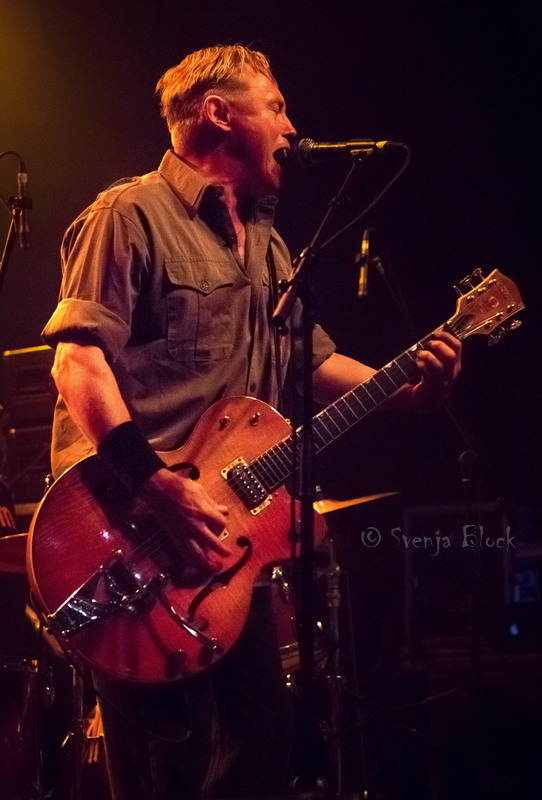 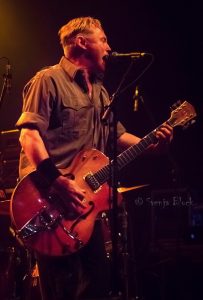 Tonight everywhere you go on the streets of Manchester the city is full of gig goers – the ever growing centre feels like the epicentre of electric culture with every venue packed with a diverse cross section of bands.

There are so many gigs on and they are all packed, from indie classics like The Jesus And Mary Chain at Academy One, The Monochrome Set at Gullivers and then shiny new things like Shaking Chains packing out the Eagle and a myriad of others. As you criss cross the streets you bump into music heads running around the booming crane strewn city centre running from one gig to another with that fervent look of purpose in their eyes. Some say the new skyscraper city has killed the music culture but the opposite is true – there are 40 venues in the centre now and music is everywhere.

If the city is architecturally rising like a high decibel phoenix from the grave then, perhaps, southerners Theatre Of Hate are the perfect sonic reflection of this. The band, who were such an influence on the early Roses and the Smiths and Peter Hook with legendary early eighties gigs in Manchester with their fervent flat top following and impassioned and powerfully brilliant songs, are now truly on fire and deliver a stunning set that is so brimful of emotion that you feel misty eyed watching them and re blown away by the dynamic brilliance of their music and the humility with which they deliver it. It’s almost like Kirk Brandon himself can’t quite believe just how good this is all sounding.

In that weird last lap sprint of so many punk period classic like the Stranglers, the Damned and tonight’s headliners SLF – bands that are back in the big venues and headlining the big tours it seemed like Theatre Of Hate were one level down – the cherished by cult audience outsiders looking in but the last 12 months have seen a big sea change.

The Kinshi album was a big step forward – far more than a perfunctory fumble at past glories it sits well in their canon, playing to all their strengths but the real calling card is these impassioned and powerful live performances. Their headline tour in January was a calling card – the band were serious business again but this support slot with SLF has had the wires buzzing. To put it simply Theatre Of Hate are on fire – the big stage suits the big sound – that unique combination of Stan Stammers brilliant bass playing with those high runs that were parallel with a younger Peter Hook, that smoking sax and the precision power drums and of course Kirk Brandon’s stunning vocal delivery – that remarkable part opera, part punk rock wail that cuts through the decades and is full of powerful emotion and melody. The flattops are still out in force – time has not wilted their follicles or their passion and the crowd are twitching and swaying to the band’s remarkable songs.

I’ve never seen a support band go down this well.

There is a hefty mosh pit and arms are held aloft for the anthemic choruses. Theatre Of Hate are a band in a rush. No longer the outsiders looking in they are getting their justice with their songs that lyrically remain timely and the music that has never dates, a music that is so key to Manchester music history – only last week Johnny Marr was lengthily singing their praises calling them the ‘younger brothers of the Clash’ and how the Smiths 50’s flavoured looked owed the band a mini debt in an interview I did with him and Mani from the Roses is a huge fan. There was something about the band that was always embraced in Manchester and its fitting that tonight is their best reception on the tour so far – and that’s saying something with the buzz out there – surely they can only be a year away from headlining the Ritz themselves – there is something very special going on here.

Any other band would have struggled after a reaction like that but Stiff Little Fingers have a fiercely loyal crowd and a much loved catalogue that sets a very different stage. The band have been touring constantly for years and they have honed down those firebrand songs that are so much part of people’s DNA. These are modern electric folk songs – many of them forged in Belfast back in the late seventies, a city where punk really mattered. With their melodic prowess and Jake Burns powerful sandpaper voice, SLF still know how to deliver a great show like punk rock Springsteen’s taking classic rock and crunching it through the punk rock claustrophobia and distortion. This is the annual reaffirmation of the band who have become punk classic and filling he big venues like, surely, Theatre Of hate should/will be doing next year.