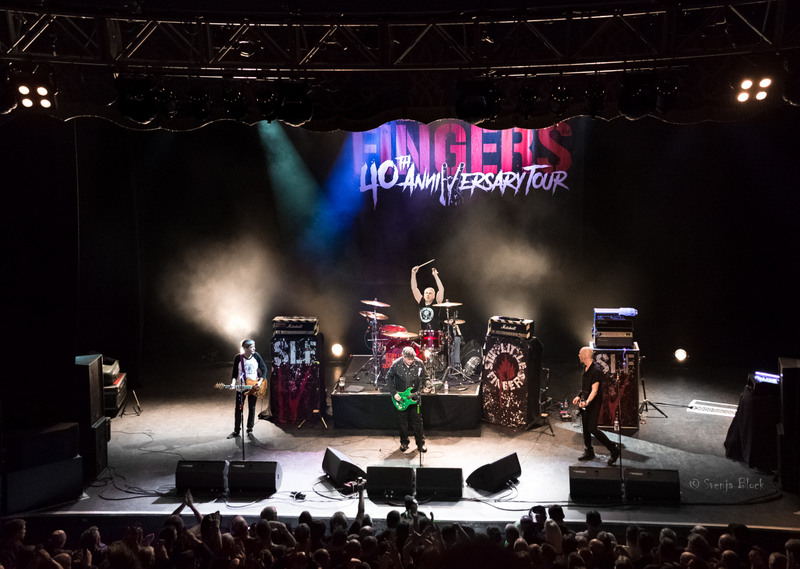 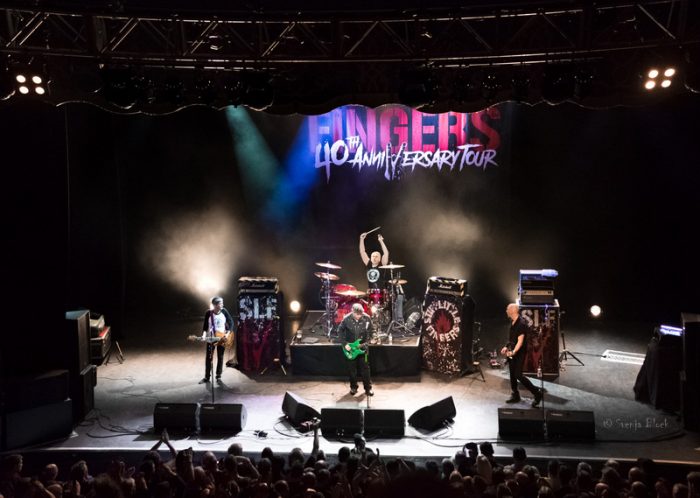 It’s that time of year again !!! Stiff Little Fingers make their annual visit at the Forum, this year celebrating their 40th anniversary with the added bonus of Theatre of Hate. Photos by Svenja Block and words by Craig Chaligne.

It’s a packed Forum that welcomed Theatre of Hate when they appeared on stage. Opening for SLF for the whole of their UK tour, Kirk Brandon and his accomplices played a compact set mixing tunes from the recently released “Kinshi” and old favourites. Jake Burns and Brandon both play in punk-rock supergroup “Dead Man Walking” so bringing in Theatre of Hate on board for this tour seemed quite a natural fit. Brandon’s dedication to performing is legendary and tonight was no different as he spat out his vocals while clenching his fists. Bass player Stan Stammers and saxophonist John Lennard paced the stage with the latter’s saxophone blasts anchoring the sound.

Stiff Little Finger’s popularity hasn’t waned an inch since they embarked on the second phase of their existence in 1987. Their dedicated fanbase showed up in force at The Forum and it was more a case of spotting who wasn’t wearing an SLF t-shirt than who was. When the lights dimmed to the sound of the instrumental “Go For It”, an almighty roar rose from the crowd doubling in volume when the band took to the stage.

This 40th anniversary tour enabled to dig a little deeper in their back catalogue, unearthing some lesser known numbers. Of course healthy chunks of their 1979 debut LP “Inflammable Material” were aired starting with the opening number “Breakout” but the band also showcased their most recent work including the party anthem “Roaring Boys” from 1997’s “Tinderbox” , the protest song “Each Dollar a Bullet”, which Jake pointed out was unfortunately still as relevant today as when it was released in 1991.

To say the band is a well oiled live unit would be an understatement, the rhythm section of Steve Grantley and Ali McMordie powered along at breakneck speed while Ian McCallum’s rhythm guitar parts and backing vocals provide the perfect foil to Jake’s precise playing and lead vocals. Some might miss Jake’s sandpapery delivery from SLF’s earlier records but there is no denying he still is a great singer. Listing all the songs played that night would prove a bit futile but “Guilty As Sin” from their latest album “No Going Back” was a definite highlight. The evening closed off with an extended series of encore culminating with a vengeful version of “Alternative Ulster”.