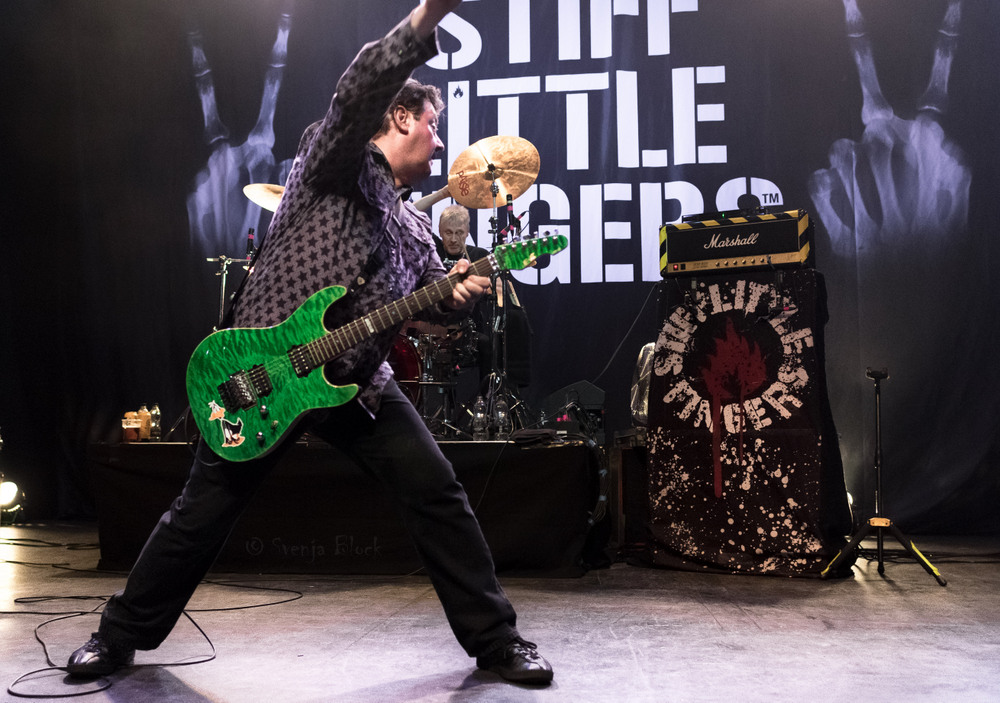 Tenacity, my friend, that’s our word of the day. It’s the best word I can think of to describe the night, the experience. I could run through the setlist and say the crowd loved it, but if you’re reading this, then chances are you will know all that anyway. All I can hope to do is capture some of the spirit of the evening and hope to describe the extraordinary bond between this band and their audience that has endured for forty-five years now.

If we want to define tenacity, then we need to look no further than ebullient frontman Jake Burns. Having been forced to cancel shows earlier in the week due to a heavy cold and no voice, here he is on a Friday evening belting out classic after classic, which could hardly be described as unchallenging to the vocal chords, like the seasoned trooper that he is. Many would rather be slumped in an armchair with their Lemsip, but this man is driven by a burning desire to not let anyone down. As, in fairness, are his bandmates; fellow founding member Ali McMordie is still a livewire whilst longstanding drummer Steve Grantley and guitarist Ian McCallum know their game inside out.

The venue tonight, not my favourite but let’s park that, is rammed tight, just as it was on their last visit three years ago. Kicking off the set with an opening gambit of Suspect Device, At The Edge and Fly The Flag had the same effect as throwing a match into an oil can. This audience has waited a long time so the walls and fire exits, jealously guarded by the ubiquitous and tiresome Show Sec, (yes folks, it’s another Academy venue) were rattling from the outset.

The setlist is a career-spanning overview, though Jake Burns does tell us he hasn’t spent all his time since the last visit eating pies and shaving his head, as he introduces new track The Last Protest Song. Alongside that, we get a range of classics such as Bits of Kids, Hope Street, When We Were Young and the Kitchen Sink mini-drama that is the superb Safe As Houses, which is a true test of the Burns tonsils. Reflecting on the trouble-torn environment of 1970’s Belfast, from which the band emerged, McMordie wonders if anyone has learned anything with the current horrors of Ukraine ever-present on news bulletins. Barbed Wire Love is the inevitable song to follow; everything changes and nothing changes.

But if we need further evidence of tenacity, we just need to take a look around us at the crowd that we are part of, and have been part of for so many long years. Everyone has been through it, band and audience, and some haven’t made it through, but all we can do is carry on; punching the air and singing along, word for word. Plenty of young ‘uns in evidence tonight, but I’m of the view that most share my story; buying the records when they come out, home on the bus staring at the sleeve, onto the stereo goes the vinyl while you study the lyrics. That’s over forty years ago, but I bet any of us could go back there in an instant and recall. We’re still here clinging on, and how many in the crowd tonight would say their lives were changed by the men onstage, as Jake Burns tells us his was as he introduces the brilliant Strummerville?

Jake Burns told me a few years back that SLF are incredibly aware of how important the band is to their fanbase, and that when the time comes to consider slowing down or retirement, the audience will be one of their prime considerations. Let’s hope that’s a way off yet but, when the moment does finally come, we will have a host of memories of evenings like this, to sustain us. We will not go gently into that good night my friends.

Photo from 2018 by Svenja Block – you can find her work on her author’s profile here.